Still struggling to revive its drought of approvals, especially after staunchly refusing to succumb to the rest of Big Pharma's strategy of mergers and acquisitions, Eli Lilly (NYSE:LLY) suffered another setback for its diabetes pipeline this week when the FDA rejected Lilly's SGLT2 inhibitor empagliflozin, stating concern with the Boerhringer Ingelheim plant in Germany where the drug is to be manufactured.

Still in the doghouse

In their letter, the FDA did not request any additional clinical trials, but stated that insufficiencies with the plant needed to be addressed before approval would be considered. Eli Lilly already submitted data from 10 trials involving over 13,000 patients with the initial submission, and not having to conduct more studies is a major win, especially in light of the struggle that rival AstraZeneca's (NASDAQ:AZN) SGLT2 inhibitor Farxiga underwent. Farxiga was finally approved this January, but not after a lengthy delay when regulators required additional studies prior to approval, costing the company nearly two years.

The FDA initially visited the German Boerhringer Ingelheim plant in question in November of 2012 and issued a warning letter the following May with strong concerns on foreign particles found in active pharmaceutical ingredients, failure to reject batches of drugs known to be contaminated, failure to investigate failed uniformity of delivered dose in the Spiriva HandiHaler and failure to investigate other concerns on contamination. Empagliflozin was not specifically mentioned in the letter at that time .

Apparently these issues from November 2012 are still problematic for the plant, but now Eli Lilly and Boerhringer Ingelheim both state they are working to resolve the concerns and submit a response to the FDA.

Part of a trend
This is not the first setback for Eli Lilly's diabetes piepeline. Lilly reported the positive results for its likely lead approval agent GLP-1 inhibitor dulaglutide, it also got tied into a nasty lawsuit with Sanofi (NASDAQ:SNY) over Sanofi's insulin product Lantus, filed late January of this year.

While a lawsuit is never good news for a company, this particular one may help Sanofi more than it hurts Lilly. Obviously the significant delay in approval is a concern for Lilly, but for Sanofi, this could mean an opportunity for a multiyear extension of exclusivity if it is found that patents were indeed infringed. Sanofi's patent expires in February of 2015, and Lilly had already stated it would not launch its biosimilar prior to that date.

Additionally, the delay buys time for Sanofi to switch its Lantus patients to a new agent, U300, pending approval in 2015, which would allow the company to retain its patient population even after Lantus' patent expiry. This is a patent that Sanofi would certainly profit from protecting or possible extending. Lantus currently accounts for nearly 20% of Sanofi's total sales and over a third of its operating profit. Lilly had predicted annual sales of $1 billion by 2020 for a Lantus biosimilar.

Bottom line
The concerns over empagliflozin is not a huge setback for Lilly, especially given that the FDA did not request additional clinical studies. Lilly barely fell 1% the day of the announcement, but Lilly still needs to get an approval sooner rather than later to reinvigorate confidence in its pipeline after a stint without any approvals, especially for a company that continues to tout its in-house R&D as the rest of Big Pharma moves toward deals and partnerships. 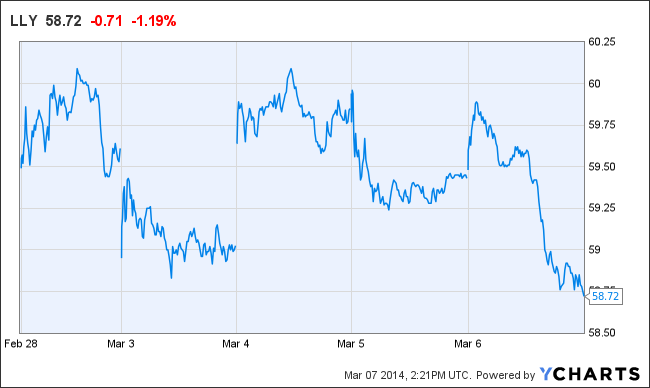 Empagliflozin is expected to bring in $295 million in annual sales by 2019 according to Bloomberg. Even with that relatively small revenue profile, Lilly can't afford to have issues like these with the manufacturing plant that will now delay approval of an agent when the company needs a win.