Many investors, Warren Buffett among them, believe that gold is an inferior investment to equities.

Buffett made the following famous statement in May 2011:

I will say this about gold -- if you took all the gold in the world, it would roughly make a cube 67 feet on a side. Now for that same cube of gold, it would be worth at today's market prices about $7 trillion dollars – that's probably about a third of the value of all the stocks in the United States. For $7 trillion dollars, you could have all the farmland in the United States, you could have about seven ExxonMobils, and you could have a trillion dollars of walking-around money. And if you offered me the choice of looking at some 67 foot cube of gold and looking at it all day, and you know me touching it and fondling it occasionally Call me crazy, but I'll take the farmland and the ExxonMobils.

Since May 2011, SPDR Gold Trust (NYSEMKT:GLD) is down 14% while the SPDR S&P 500 ETF  is up 38%. Owning gold has not been a rewarding investment over this period as the U.S.10 year yield has risen and the U.S. economy has improved. 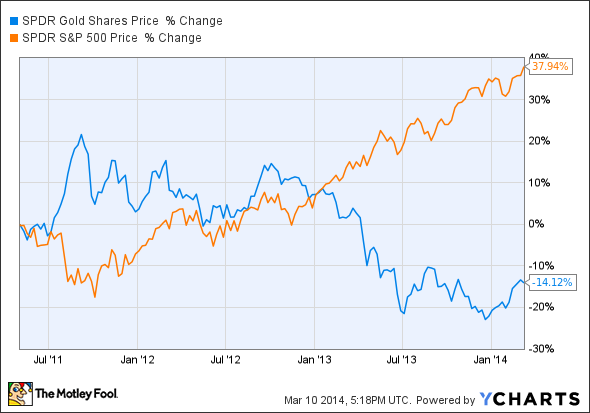 Despite the pessimism, many investors still believe in gold's prospects over the coming years. Here's why.

Federal Reserve's trillions
First, the Federal Reserve has a $4.1 trillion balance sheet. That number is simply gigantic versus historical norms. Currently, the Fed is getting away with it because the U.S. is in a Goldilocks zone, where inflation and interest rates are low while growth is pretty steady.

This type of macro situation has not been historically sustainable. Eventually the U.S. will run into inflation when the economy reaches full employment. When that time comes, it remains to be seen whether the Federal Reserve can withdraw enough liquidity to avoid further inflation. If inflation becomes a big problem, demand for hard assets like gold will increase greatly.

Data over the past decade backs this up. According to the China Gold Association, China became the largest consumer of physical gold in the world last year. Chinese gold jewelry consumption grew 43% to 716.50 tonnes in 2013.

The dollar and twin deficits
Third, the dollar is pretty strong right now because the U.S. economy is the best house on a bad block. On a ten year timeline, however, the dollar still has questions. The U.S. still has twin deficits: a large fiscal deficit and a large trade deficit. The dollar has not depreciated because the Chinese have been buying treasuries en masse, but as China becomes more of a consumer nation, it will buy less treasuries and the dollar may fall. Other major economies may also improve their competitiveness versus the United States, which would further weaken the dollar. If the dollar weakens, gold's value versus the dollar will strengthen.

The bottom line
I believe the principle reason to invest in gold is the growing Chinese and Indian demand over the next decade. Gold's protection against inflation is kind of like a free call option in this case.

For 2014, Barrick Gold has an all-in sustaining cost forecast of between $920 to $980 per ounce. Soros Fund Management also recently added 6.3 million shares of Barrick Gold to its portfolio.

Despite the recent rally, gold is still a pretty controversial investment. Warren Buffett may be right on gold over the next ten years. Equities may continue to outperform gold. There are, however, some good reasons to take the opposite side.