Finding under-the-radar companies that offer significant growth potential is a good way to maximize your investment potential. That said, it's time to take a close look at Popeye's Louisiana Kitchen (NASDAQ:PLKI) and see why it offers a significant growth opportunity.

High demand
Popeye's has quietly delivered five consecutive years of comps (same-store sales) growth. This is difficult to achieve in today's highly competitive environment, especially one which includes a hesitant consumer. In fiscal-year 2013, Popeye's comps improved 3.6% over those of fiscal-year 2012.

An eye on the bottom line
Companies that show strong top-line growth are always attractive to many investors. However, it's rare to find a company that delivers strong top-line growth while also performing well on the bottom line. Popeye's has shown bottom-line growth of 89.44% over the past five years. It has managed to keep expenses in check on a consistent basis. Consider the chart below, which includes other players in the chicken market: Wendy's (NASDAQ:WEN) and Yum! Brands (NYSE:YUM). 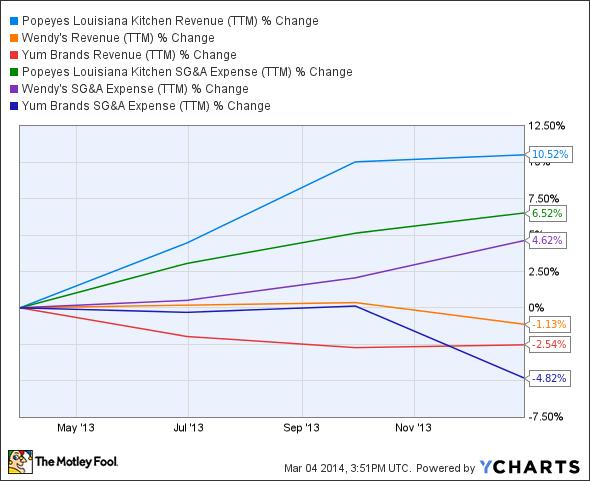 You might not think of Wendy's as a restaurant that focuses primarily on chicken, but it has 17 chicken-based menu items and 12 burger-related menu items. Wendy's is wise to the fact that chicken is in higher demand than beef because it's more affordable for the company's target customer. Chicken items on the Wendy's menu include the Asiago Ranch Chicken Club, Spicy Chicken Sandwich, Homestyle Chicken Fillet, Spicy Chicken Go Wrap, and Chicken Nuggets.

Yum! Brands owns KFC. However, when you invest in Yum! Brands, you're also investing in Taco Bell and Pizza Hut. Regardless of this, Popeye's is the only restaurant brand of the three that has consistently seen its top line outpace its SG&A expenses over the past year. That's often the sign of effective management.

That said, Yum! Brands might be more attractive for dividend investors since it offers a dividend yield of 2%. Popeye's is in a high-growth stage. Therefore, it reinvests its capital in its business instead of returning it to shareholders. Wendy's falls somewhere in the middle -- still growing but also returning capital to shareholders. It currently yields 2.10%.

The Foolish takeaway
Popeye's has seen consistent high demand for years. Combine that with geographical expansion and you're likely to have a winner. It's also trading at an attractive valuation in comparison with its peers. That said, if you prefer safety, then you would likely be better off with the more-diversified Yum! Brands. Please do your own research prior to making any investment decisions.