Despite macroeconomic headwinds and dismal bottom-line results, some of the big names in the luxury apparel and accessories industry are increasing the prices of their offerings. Is there more to this trend than meets the eye? 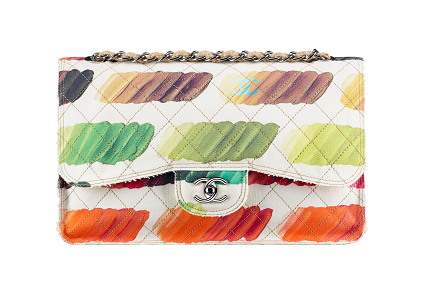 Chanel handbag from the Spring/Summer 2014 collection.

Prices of raw materials have peaked
Not only do rising labor costs in China give designer brands a hard time, but raw material prices have gone through the roof. Cattle prices, which are relevant to cute leather duffel bags and fancy leather wristbands, have hit an all-time high underpinned by years of drought and shrinking herds.

Not to mention, in the years since the outbreak of the recent financial crisis, cotton prices have hit sky-high levels, too. China's policy of purchasing the majority of its domestic production at a price way higher than the world average and then hoarding had a lot to do with it.

Disturbing currency movements
Many European luxury houses remain cautious about their bottom line mainly because of recent adverse currency effects caused by the appreciation of the euro versus the dollar and the yen. Last month, the maker of $8,000 to $40,000 Birkin and Kelly bags, Hermès, hiked its prices in Japan by as much as 10% to offset the yen's weakness, according to Reuters.

China's corruption crackdown
A crackdown on corruption in China has dented the sales of many luxury houses. In an effort to weed out the custom of giving lavish gifts to officials in exchange for favors, spending on luxury apparel and accessories in the country has experienced a slowdown. Luxury sales that were growing at a double-digit pace are now expected to hover around single-digit rates. A recent study of Chinese millionaires claimed that China's wealthiest spent 25% less on gifts last year than they did in 2012.

Kering's luxury-goods brand Gucci endured its slowest fourth-quarter sales growth in four years, due to the softening demand in China. Kering is raising prices at Gucci and slowing the pace of expansion in the country, in an attempt to weather the storm.

The 'democratic fashion' movement
In recent years, the unfolding "democratic fashion" movement has, pretty much, redefined the boarders of luxury. What once was considered to be exclusive is now accessible to the masses thanks to the disrupting operations of more affordable brands like Kate Spade, Coach, and Michael Kors ( CPRI -2.46% ).

Coach, for instance, is taking the Chinese market by storm selling $400 handbags and giving Louis Vuitton a run for its money. Kate Spade is taking it a step further by modeling itself on Ralph Lauren's ( RL -2.49% )( RL -2.49% )( RL -2.49% ) growth strategy. It has set its sights on becoming a lifestyle brand by offering a more diverse product portfolio at a range of price points that will lure customers with different social and income backgrounds. "Ralph Lauren is our business analog," Craig Leavitt, the New York-based label's CEO, told Bloomberg last week.

To counterbalance this movement, designer brands are raising their prices thinking that more expensive equals exclusive, and therefore desirable. And according to the Veblen-goods phenomenon, this is actually true. Named after economist Thorstein Veblen, the Veblen effect suggests that perception plays a huge part in the pricing game. Increasing the prices of certain goods, such as luxury cars, designer bags, high-end jewelry, and wines, will make them preferable to other, "ordinary" goods and eventually drive up sales.

Final thought
With a few notable exceptions, this strategy of constant price hikes doesn't seem to bear fruit. After all, there is a limit to what consumers are willing to pay for a gaudy handbag, even the ultra-wealthy ones.

Even so, the curators of luxury fashion are not giving up. Price hikes are often accompanied by an elevated shopping experience that only they can offer. Towering stores that feature lounges, libraries, and even mini-museums are designed to keep their niche clientele engaged. This helps to create and maintain a "wow" factor that differentiates them from fast-fashion and more affordable retailers.