Salesforce.com (NYSE:CRM), a cloud computing company known for its customer relationship management software, or CRM, has very rapidly become one of the largest software companies in the world. Over the past decade, Salesforce has increased its revenue by a factor of more than 20. Over the past five years, revenue has grown at an annualized rate in excess of 30%. Another year of 30% revenue growth is in cards for 2014 if the company's guidance is to be believed, and there seems to be no indication that growth will slow anytime soon. But even a cursory look at the company's financial statements reveal some big problems, and the massive revenue growth is masking some serious issues.

Where are the profits, exactly?
While Salesforce's revenue growth rate has been impressive, the company's operating profit has been negative for the past three years, and the losses have been accelerating. Part of this is due to a heavy reliance on stock-based compensation, an expense which topped $500 million, or 12% of revenue, in the most recent fiscal year.

Under generally accepted accounting principles, or GAAP, stock-based compensation is counted as an expense, and this is why Salesforce's GAAP operating profit and net income have been negative. But the company likes to tout its non-GAAP numbers, which add back stock-based compensation. Under this system, Salesforce is profitable. In the previous fiscal year, the company lost $0.39 per share on a GAAP basis, but earned $0.35 per share on a non-GAAP basis.

The problem is deeper than just stock-based compensation, though. Here's a look at a few troubling trends that have played out over the past few years: 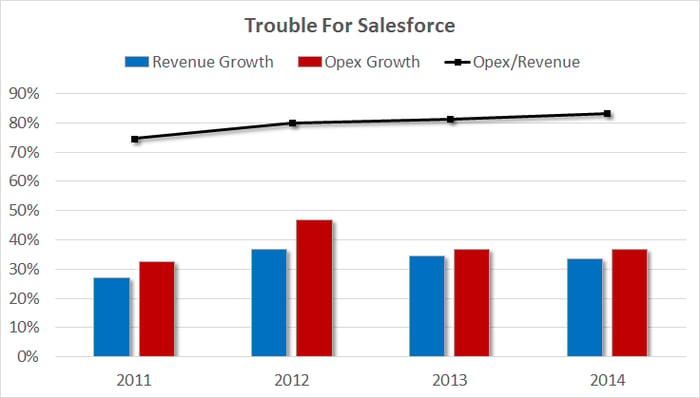 As Salesforce has grown, one would assume that the company would get more efficient over time. Economies of scale should kick in, and the cost to capture each additional dollar of sales should decrease. If there is truly high enough demand to drive 30% annual revenue growth, then Salesforce shouldn't need to spend as much as it had to four years ago in order to win a sale.

You could argue that Salesforce is investing in its future, and that recognizing its subscription-based revenue makes this sort of analysis tricky to begin with. But even ignoring the fact that operating expenses are growing relative to revenue, the fact that these costs are eating up more than 80% of revenue is troubling.

Meanwhile, companies like Microsoft (NASDAQ:MSFT) are looking to capture a bigger piece of the CRM pie. Microsoft recently announced an update to its suite of Dynamics business applications, promising greater functionality and lower costs for customers. Microsoft's strategy is to combine every functionality companies need into a single product, bringing sales and marketing together with a heavy focus on social media. This allows Dynamics to be potentially less expensive than comparable functionality from Salesforce. 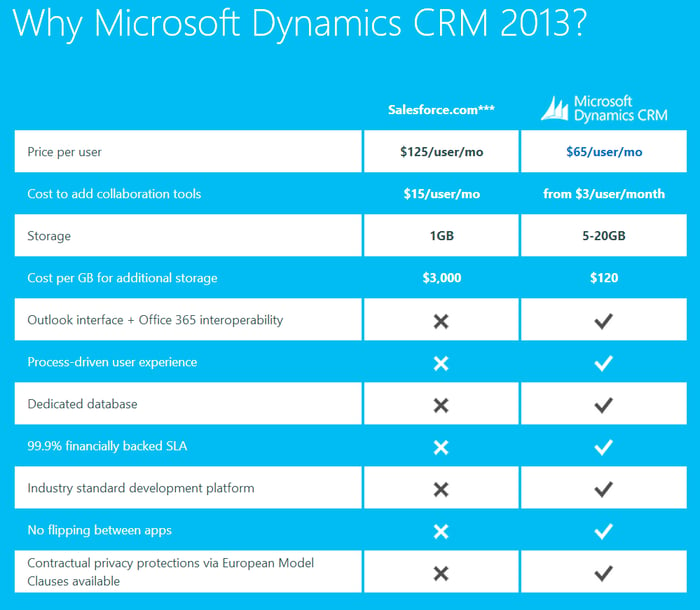 Microsoft's enterprise dominance in other areas, such as productivity software, will give the company a big advantage going forward. Companies that already use Office 365, for example, can adopt Dynamics instead of dealing with an additional vendor, and other Microsoft services like Skype and Yammer are directly integrated. By leveraging its other enterprise services and its huge install base, Microsoft poses a big threat to Salesforce's market-leading position.

The bottom line
Salesforce's inability to turn a real profit -- along with costs rising faster than revenue -- is a problem that is going to eventually catch up with the company. Acquisitions are driving some of the rapid revenue growth, but this isn't a sustainable situation. With competition from Microsoft and others getting more intense, Salesforce is going to have a difficult time maintaining the revenue growth that Wall Street has come to expect. Once this revenue growth evaporates, the stock price, currently trading at about nine times sales, will have nothing holding it up.