If you own shares of New York Community Bancorp (NYSE:NYCB), then pat yourself on the back. This under-the-radar lender is one of the best banks in America.

What makes it so exceptional? The obvious answer is its dividend. Not only does it yield 6.2%, which is more than twice that of Wells Fargo (NYSE: WFC) or JPMorgan Chase (NYSE: JPM), but it's also committed to maintaining its generous payout.

You can see this in the chart below, which shows New York Community Bancorp's quarterly payout has served as a model of stability over the past decade. This was even the case during the financial crisis, when other marquee lenders slashed their distributions to preserve capital. 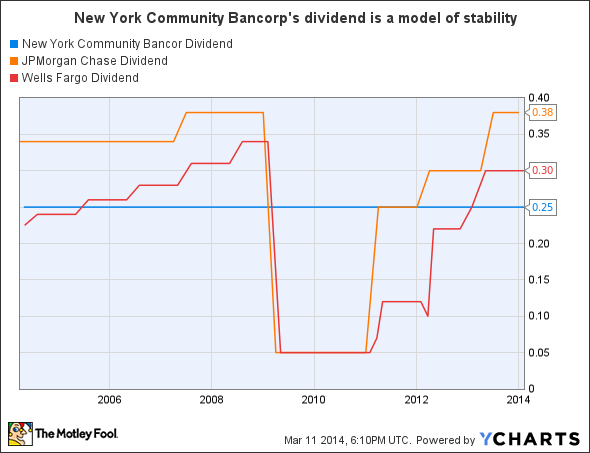 But saying New York Community Bancorp is exceptional because it unfailingly pays out a large portion of earnings glosses over a more substantive question: How is it able to do so?

The answer to this is simple -- or, at least, it's simple in theory. In short, the New York City-based lender doesn't underwrite bad loans. In fact, according to CFO Thomas Cangemi, the company has never dipped into capital to cover credit losses throughout its entire public life.

The secret is in the bank's business model, which relies to a large extent on financing multifamily, rent-controlled buildings in the New York City metropolitan area. As Cangemi explained last month,

Our lending niche is highly profitable, extremely efficient, and the quality of the loans produced, if done conservatively, is resilient to credit losses and drastic changes in a local economy. [...] Rent-regulated buildings are more likely to retain their tenants and their revenue stream during downward credit cycles. Our focus on multi-family lending in the niche market contributes to our record quality of assets and are clearly less costly to originate and produce.