U.S. stock markets are mixed today, with the Dow Jones Industrial Average (DJINDICES:^DJI) down 0.32% late in trading. There wasn't any market-moving economic data out today, and things are pretty quiet on the earnings front as well.

One of the big Dow movers is Boeing (NYSE:BA), which can't seem to get on track this year after outperforming the other 29 blue-chip stocks in 2013.

Boeing falls despite another big order
Boeing today announced an order from SpiceJet for 42 737 Max 8 aircraft worth $4.4 billion at list price. But the stock is down 1.2% for the day and it continues to underperform the Dow by a wide margin for the year. 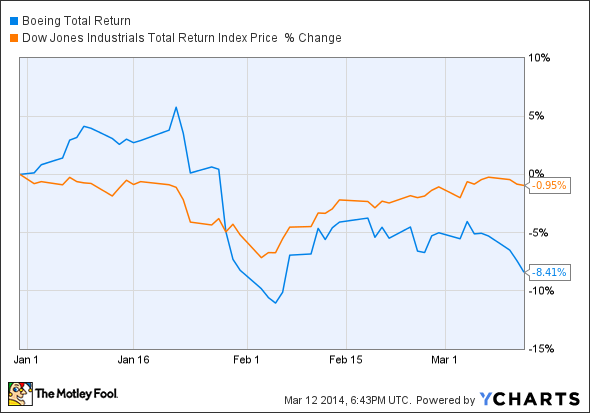 The stock has fallen recently on continued problems with the launch of the 787 Dreamliner and clouds hanging over the missing Malaysia Airlines 777.

Reports have now surfaced that the Federal Aviation Administration directed Boeing to conduct tests on 777s after a crack was discovered in a 14-year-old 777. The initial cracking was found in the fuselage skin under the satellite antenna, and checks to see if this was a widespread problem were approved in February.

Hairline fractures were also found in the wings of about 40 787 Dreamliners that were still in production earlier this month. The issue will slow deliveries in the short term, although it isn't expected to impact 2014's delivery estimate of 110 jets. But it's another mark against the aircraft that was supposed to be the future of the company.

The recent 787 issues aren't the end of the world and it's impossible to draw a link between the Malaysia Airlines 777 and the tests that were ordered. But these events do draw questions about quality and safety in investors' minds, which could lead to a sell-off after a strong 2013.

I don't think recent issues are a deal breaker and don't slow the explosive growth in aircraft needed in coming years. But with shares trading at 21 times trailing earnings they might give investors pause about paying up for the stock. If shares continue to fall investors might find a better entry point later this year when hopefully the rush of bad news will be over.