Gilead's (NASDAQ:GILD) slate of HIV drug therapies helped it capture the bulk of the market in 2013, outpacing competing therapies from Johnson & Johnson (NYSE:JNJ) and Bristol-Myers (NYSE:BMY).

Sales from Gilead's HIV drugs totaled more than $9 billion last year, providing Gilead with the cash necessary to usher its new hepatitis C drug, Sovaldi, to market, and advance its promising cancer drug idelalisib, through trials.  As a result, Gilead's shares doubled in the past year. That's impressive, but can Gilead repeat it's performance this year too? 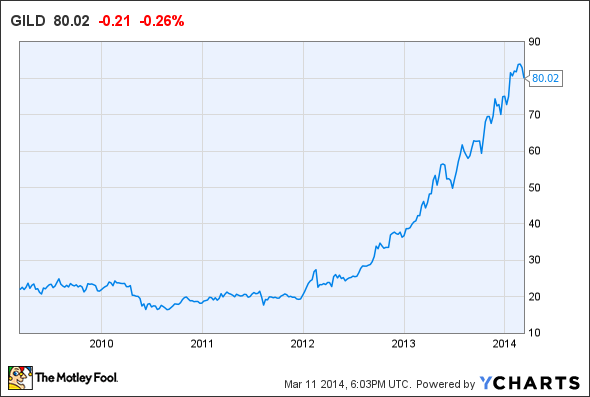 But that doesn't mean investors should ignore the strong performance of Gilead's HIV franchise. In addition to well-established HIV drugs like Truvada, Gilead also has two new drugs that are quickly gaining ground. Stribild, a drug that combines Gilead's Vitekta, Tybost, Viread and Emtriva in one pill, saw sales jump last year (its first full year on the market). In the fourth quarter, Gilead sold $204 million worth of the drug, suggesting Stribild --- approved by the FDA in late 2012 -- could become a blockbuster this year. Gilead is also seeing Complera's sales pick up. Complera, which won approval in 2011, combines Gilead's Truvada with Johnson & Johnson's Edurant. Sales of Complera doubled last year to more than $800 million, suggesting it will also eclipse the $1 billion sales mark in 2014. If those two drugs continue to win scripts, Gilead may end up with five blockbuster HIV treatments on the market, including Atripla, Viread, and Truvada.

Those five drugs have captured a significant portion of the total market, outdoing offerings from both Johnson & Johnson and Bristol. Johnson's Prezista and Intelence had combined sales of more than $2 billion last year. Prezista, which accounted for $1.7 billion of those sales, continued to gain traction as sales improved 30% to $461 million in the fourth quarter.   Over at Bristol, Sustiva and Reyataz combined to contribute total sales of over $1.7 billion in the U.S., and $3 billion globally in 2013.

Lasting growth
The vast majority of Stribild's sales were in the United States last year. However, the drug won approval in the EU in May of 2013, and sales are just starting to accelerate. Gilead sold $14 million worth of the compound in Europe during the fourth quarter, bringing full year sales there to $24 million. The same is true for Complera. Sales in Europe rose to $95 million in the fourth quarter from $28 million a year ago. Since Atripla generates more than a $1 billion in sales in Europe per year, there appears to be a significant opportunity for additional growth.

Fool-worthy final thoughts
The market for HIV therapy remains important given more than 33 million remain infected with the disease globally. Advances in treatment have significantly improved the outlook for these patients, but it's come at a cost. The unmet need has prompted waves of pushback accusing the industry of too aggressively pricing these drugs. That's prompted Gilead, Johnson, and Bristol to institute programs designed to ease the financial burden, particularly in less-wealthy developing countries.

The development of combination therapies provides Gilead with a long-lasting HIV product portfolio that should allow the company to maintain its leadership for the foreseeable future. As a result, Gilead is able to reinvest in its product portfolio. The company currently has ongoing clinical trials addressing liver disease, cardiovascular, respiratory, and cancer indications.