The S&P 500 and the narrower Dow Jones Industrial Average (DJINDICES:^DJI) are down 0.36% and 0.27%, respectively, at 10:15 a.m. EDT. Shares of Federal National Mortgage Association (OTC:FNMA) and Federal Home Loan Mortgage Corp. (OTC:FMCC), better known as Fannie Mae and Freddie Mac, have popped up on bargain hunters' stock screens after yesterday's savage declines of 27% and 31%, respectively. Whether they constitute genuine bargains is another, altogether more complicated, question -- one I'd advise investors immediately assign to the "too hard" pile.

The catalyst for the stocks' declines was the announcement by the heads of the Senate banking committee regarding a bipartisan plan to wind down the two mortgage giants. The catch? As the Financial Times noted, the plan "did not appear to provide an outlet for investors to share in their profits." Yikes!

Following a reversal in their fortunes in the post-crisis era, those profits are now substantial -- as one might expect for companies that operate a government-sanctioned oligopoly in the housing finance market. Between the lure of those profits and the huge volatility in the shares, which created a self-reinforcing momentum effect, both stocks have attracted enormous interest from hedge funds and other speculators: 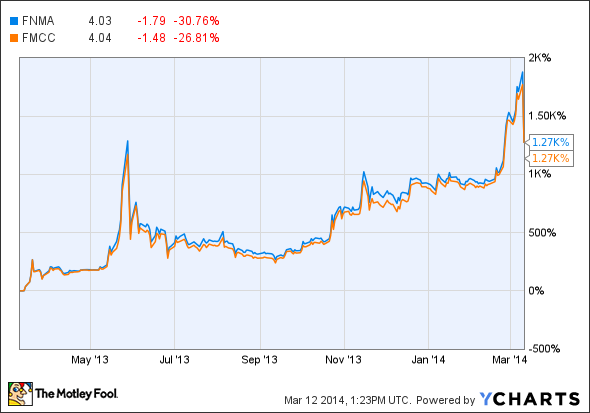 You're not reading those percentage returns incorrectly: Both stocks have seen nearly 14-fold increases in share price over the past 12 months!

Even as the latest plan emerged from Congress, it shouldn't come as a complete surprise to investors if they are treated as second-class citizens, as there is a precedent for such behavior. Fannie Mae and Freddie Mac have been wards of the federal government since they received a $188 billion taxpayer-funded bailout in 2008. However, under revised terms of the bailout set by the Treasury Department, which became effective last year, Fannie and Freddie cannot retain any of their earnings; instead, they must pay all profits to the government. Prior to that, the government only received a 10% dividend payment on its preferred shares.

The new terms are being contested in court by several high-profile investment funds, including Perry Capital and Fairholme Capital Management. That fact alone ought to instruct individual investors that this is not the playground they want to be playing in. Between the complexity of Fannie Mae and Freddie Mac's financials and, more importantly, the legal and regulatory uncertainty that surrounds their fate, this is a special situation that requires expertise and a lot of attention. If you wish to try to ride the professionals' coattails purely as a punt, that's your business; however, it's not investing and there are easier ways to earn a return in the stock market.