Staples just disappointed the Street, but there is a glimmer of hope.

Staples' ( SPLS ) stock price took a beating after the retailer reported fourth-quarter and full-year results. Based on most of the numbers, this makes sense--there wasn't much to like. However, there is one area where Staples is performing well, and this area is in-line with the company's future goals.

Not much to like
All the following results include the 53rd week in 2012 for year-over-year comparisons.

For the fourth quarter, North American stores and online sales plummeted 12.1%, with comps (same-store sales) sliding 7%. The comps decline was due to a 6% decline in traffic as well as a 1% slide in average order size. For fiscal-year 2013, sales dropped 6.1%, with comps declining 4%.

Looking ahead, Staples expects first-quarter sales to decrease and for fiscal-year 2014 free cash flow to come in a little north of $600 million. While this is still positive free cash flow, it's less than the $737 million in free cash flow generation reported for fiscal-year 2013. If this number continues to decline over the next several years, then it could impact how much capital Staples returns to shareholders. If that happens, then investors will need to see growth. 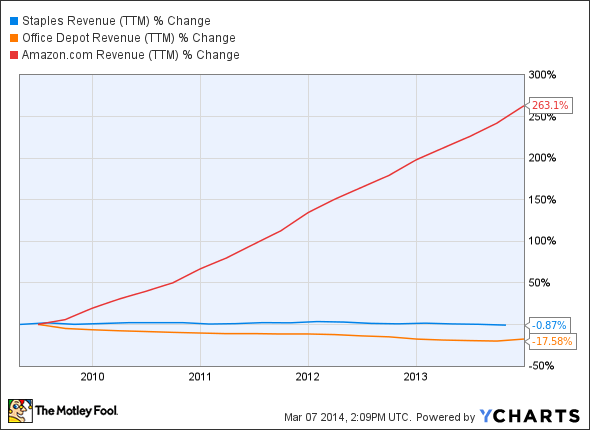 That is, of course, if you believe that past results are indicative of future potential. Once a company's original growth spurt is over, it's difficult for that company to restart the engine again on the top line.

Based on all the information above, it's clear that Staples' future isn't likely to be in the brick-and-mortar space. Fortunately, another growth opportunity exists.

Online presence
Staples reported 10% online sales growth in the fourth quarter, which is impressive. If you read the fine print, however, then you will see that on a generally accepted accounting principles basis, sales at Staples.com only grew 1%. But that's still a positive sign relative to the information above.

Staples plans on closing up to 225 physical locations by 2015, and it's implementing a $500 million cost-reduction plan. If Staples cuts costs via reduced headcount, improved supply chain efficiency, and store closures, then it could find itself in an enviable position...if it grows online. A successful online business is a lot more cost-effective than a brick-and-mortar business. And currently, almost 50% of Staples' sales are online. The question is, can Staples.com continue to grow?

Answering that question is difficult. All we can do is look at recent results. According to Alexa.com (global leader in online analytics), over the past three months, Staples.com has seen its pageviews-per-user increase 5.4% to 5.27, its time-on-site improve 5% to 4:45, and its bounce rate (visitor views one page and exits the site) decline 2% to 32.8%. These are all positive numbers that indicate at least short-term online growth. The point here: Staples has a chance.

Investment consideration?
Investing in a potential turnaround play can be highly profitable, but that's not often the case when the company just disappointed the Street in a big way. For long-term investors, the good news is that Staples has the capital to pull off a successful turnaround. However, it's impossible to predict how effective Staples will be with its marketing. For those who are willing to wait, at least Staples offers a generous 3.5% dividend yield.

On the other hand, a turnaround isn't a guarantee. And it's clear that Amazon is best of breed when it comes to online retailers of any kind. The one potential negative for Amazon is that it's trading at 88 times forward earnings, whereas Staples and Office Depot are trading at 9 and 12 times forward earnings, respectively. That said, in the current environment, high-multiple stocks belonging to strong top-line growth companies tend to perform well. In other words, it has been worth paying the multiple for these companies.

As for Office Depot, it's performing the weakest of the three on the top line, it doesn't pay a dividend, and it's slightly more expensive than Staples. Therefore, if you're going to roll the dice, then you might want to consider Staples over Office Depot.

The bottom line
Staples will be closing its physical stores at a rapid rate while reducing headcount and improving supply chain efficiency. This cost cutting will free up capital that it can reinvest in its online business, which happens to be performing well. If all goes according to plan, Staples will still generate enough cash flow to reward shareholders.

Of course, everything will need to fall into place, which isn't a guarantee. Staples is now a high-risk/high-reward investment. Despite the high multiple, investors would likely be safer in Amazon.