As both an NVIDIA (NASDAQ:NVDA) and Intel (NASDAQ:INTC) shareholder, one merger that has seemed extremely appealing over the last year has been the purchase of NVIDIA by Intel. The synergies here are mind-numbingly obvious, and such an acquisition would lead to the creation of, frankly, an unstoppable force in the semiconductor business and would rather dramatically change the semiconductor market to favor both NVIDIA shareholders and Intel shareholders.

NVIDIA's GPU architectures are far superior
Even as an Intel bull, it's important to call a spade a spade. Intel's GPU architectures to date have been downright embarrassing. The Gen 7-derived GPU in the company's Bay Trail-T system-on-chip is lower performing than the Adreno 330 found inside of the Qualcomm (NASDAQ:QCOM) Snapdragon 800 as well as the GeForce ULP found in the Tegra 4. In fact, Intel's Gen. 7 GPU is so poor on a performance/watt and performance/area compare that the company uses GPU blocks from Imagination Technologies (LSE:IMG) for its smartphone-oriented chips.

But it's not just ultra-mobile computing that's the problem -- it's the PC. While Intel has been improving its GPU architectures found in its PC-oriented chips, and while these GPUs benefit from Intel's industry-leading manufacturing technology, NVIDIA is still able to offer discrete GPU solutions that outrun the integrated parts as far as performance/watt goes. Now, the discrete GPUs have dedicated memory, wide memory busses, and a fairly large die size budgets, but this argument breaks down when we see Intel's Iris Pro (which has a large area budget, a fat custom-designed eDRAM, and low latency access to the CPU) perform meaningfully worse than a discrete solution in a lower thermal envelope (although do keep in mind that the number of CPU cores doubles in the Iris Pro measurement and the game may not be particularly CPU limited). 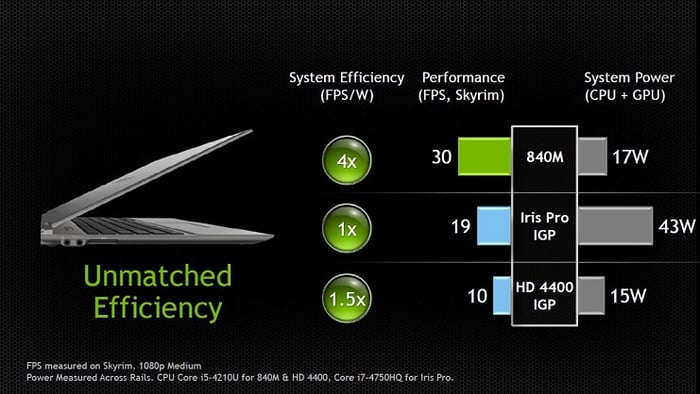 But Intel should have two new GPU architectures out in 2014 and 2015...
The argument that somebody could very reasonably make is that Intel's Gen 7.5 GPU found inside of Haswell (which, as rumor has it, was a last-minute effort as its Larrabee GPU was insufficient to meet Haswell's needs) is an old architecture and that Intel is planning a significant revamp with its Gen. 8 GPU. Indeed, all of the signs suggest that is the case. Further, Intel appears to be planning yet another significant revision with its Gen. 9 GPU, which will be found in the Skylake PC processor as well as the Broxton system-on-chip intended for tablets and smartphones, both scheduled for mid-2015 launches. If Intel can really punch it and deliver a set of world-class GPU architectures, then the case for Intel picking up NVIDIA suddenly becomes a whole lot less compelling.

What would be in it for both parties financially?
For Intel, the strategic benefits are pretty clear:

Now, the tricky question is: What does NVIDIA get out of this?

NVIDIA's stock has had a very nice run from the $12's seen in late 2012, and it now trades much closer to fair value today than it did then, but many will argue that the company has quite a bit of room left to run as a stand-alone entity. As soon as the thesis that the discrete GPU is going away is discredited (and it seems to have been), NVIDIA's future looks a lot brighter and something like Tegra looks to be a great incremental growth opportunity. Not to mention, of course, the room there is across NVIDIA's various growth initiatives (Tesla, Quadro, GeForce, GRID, and so on).

In short, NVIDIA may simply not be interested in prices south of $30.

Foolish bottom line
At the end of the day, Intel needs to fix its internal GPU architectures either by building a great one organically or by acquisition. If Intel can deliver on world-class GPUs with Gen. 8 and Gen. 9, then an NVIDIA acquisition -- while still strategically interesting -- loses a lot of its allure. If Gen. 8 and 9, even with Intel's massive R&D dollars funding the development, still turn out to underperform, then picking up NVIDIA may be an interesting option.