The U.S. Census Bureau today released its retail sales report for February , and in a repeat of last month's release, the Dow Jones Industrial Average (DJINDICES:^DJI) and most of its retail-oriented components traded in narrowly positive territory early in the day despite a generally mediocre rack of results. The index has since slipped into the red, but this has been blamed more on today's Senate hearing for Federal Reserve vice chairman nominee Stanley Fischer.

The only real standouts in the retail sector were specialty retailers (sporting goods, hobby shops, bookstores, and music retailers), health and personal care, and nonstore retailers (infomercials, catalog sales, vending machines, and e-tailers -- this latter subsection accounts for the majority of sector-wide revenue). These were the only three sectors of the retail economy to post more than 1% in month-over-month revenue gains on an adjusted basis, with specialty retailers up 2.5%, health and personal care retailers rising 1.2%, and nonstore retail jumping up 1.2% from January's sales.

Let's take a look at what mattered, and what didn't, in the latest results, and perhaps gain a better understanding of how that might affect your favorite retail-oriented stocks (and the economy in general) going forward. 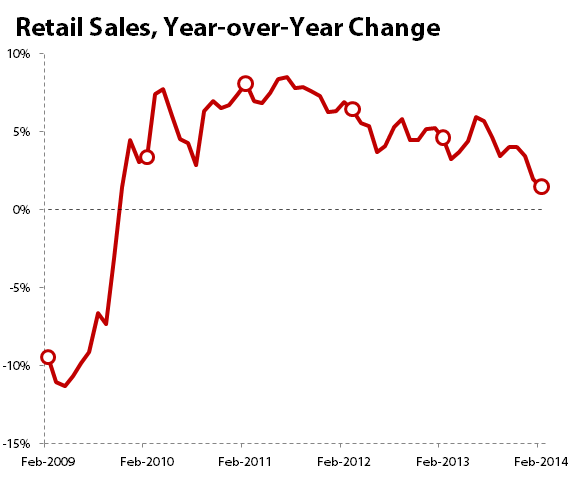 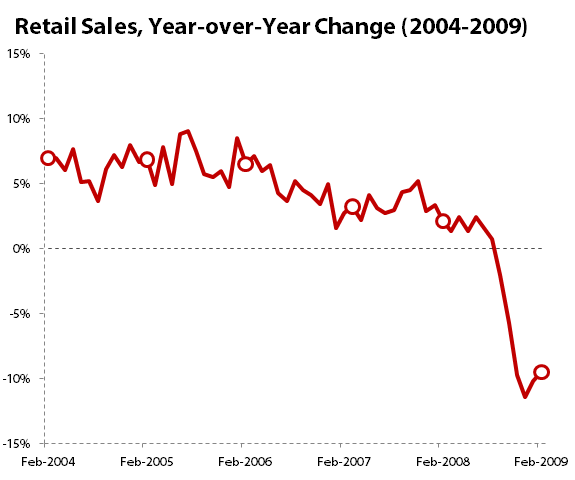 However, there are some key differences between 2008 and today. Gas prices soared before the financial crisis hit full strength, and pain at the pump was easy to see in monthly retail reports, which showed double-digit percentage growth in gas station sales for an entire year before oil prices plunged along with the rest of the global economy. That is not in evidence today, as monthly sales at the pump have barely changed over the past two years, and have recently begun to decline: 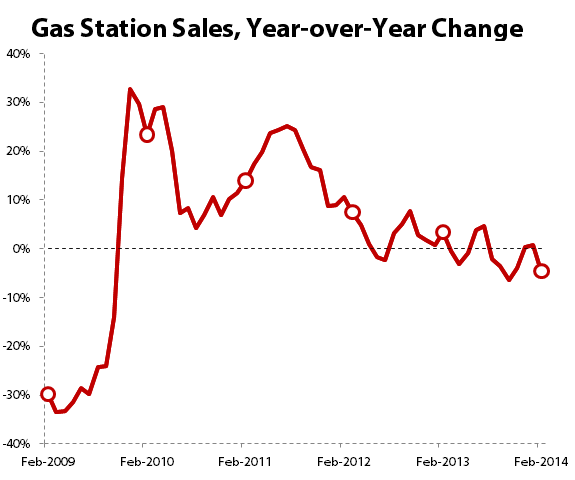 Part of this consistency is undoubtedly due to the consistency of average gas prices, which have wavered between $3.50 and $4 per gallon since early 2011, but part of this is also due to the fact that Americans simply aren't driving any more than they used to. The total number of vehicle miles driven on all U.S. roads has remained very stable since 2009, which means that neither population growth nor economic recovery have done a thing to affect American driving habits since the end of the crash. It shouldn't surprise us that Dow energy-sector components ExxonMobil  and Chevron were among the weakest early components today, and remain among the worst performers as the day progresses. The decline of American car culture would be a major blow to the oil industry's growth prospects.

However, recent sales growth of the Dow's primary retail representatives largely appears to be mimicking the long-run weakening of retail sales. In their latest reporting period, only McDonald's (NYSE: MCD) posted year-over-year quarterly sales growth of 2% or greater. Both Coca-Cola and Home Depot (NYSE:HD) saw a decline in year-over-year sales, the latter after a streak of strong top-line growth: 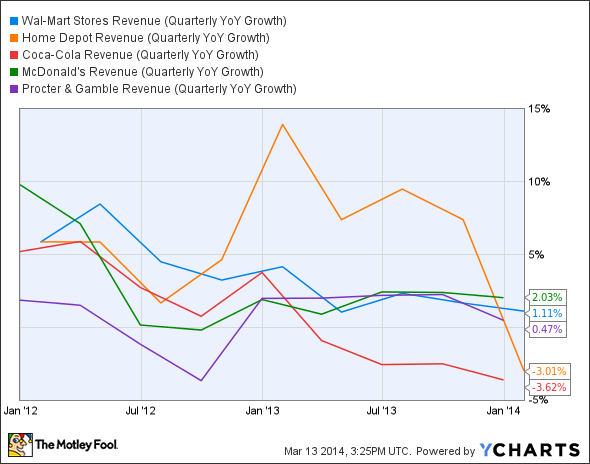 Other sectors also show some divergent results. Specialty retailers did well on a month-over-month basis, but this progress only masks a return to misery following nearly two years of surprising growth: 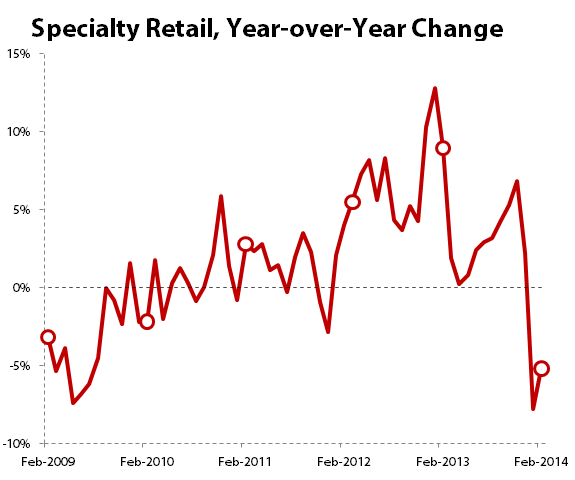 Anyone who's followed the progress of the retail industry over the past few years should be more surprised by the previous growth than the current weakness in this sector, since most of these sorts of retailers have been firmly in Amazon.com's (NASDAQ:AMZN) crosshairs for years. The growth of the nonstore retail sector, which is led by e-commerce sales, shows where the money is going -- it's again abandoning these specialty retailers: 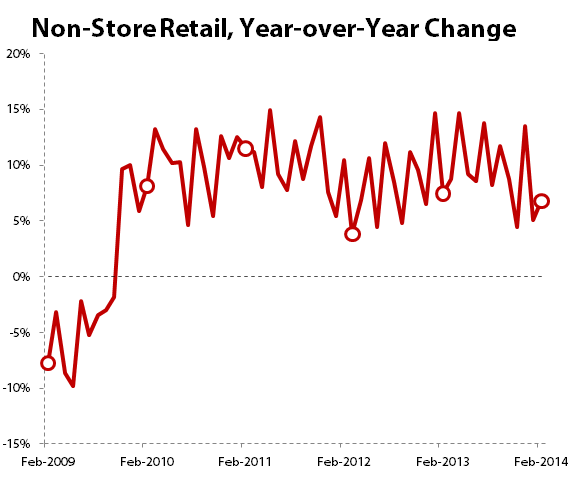 The average year-over-year growth rate for nonstore retail over the past five years has been 7.4%, while the average growth rate of specialty retail sits at 1.5%. Nonstore retail shows no signs of slowing, but it's also still too soon to tell whether the crash in specialty retail sales growth is temporary weakness or a return to the ongoing underperformance of the early post-recession years. The same thing happened a year ago, and the specialty sector recovered admirably before nosediving again this winter.

One of the few bright spots in the recent retail report was found in the health and personal care retail sector, which is led by CVS Caremark (NYSE:CVS). After briefly dropping into a year-over-year sales decline of 0.3% in October 2012, the sector rebounded quite strongly, and has been posting some of its best year-over-year growth rates since 2010: 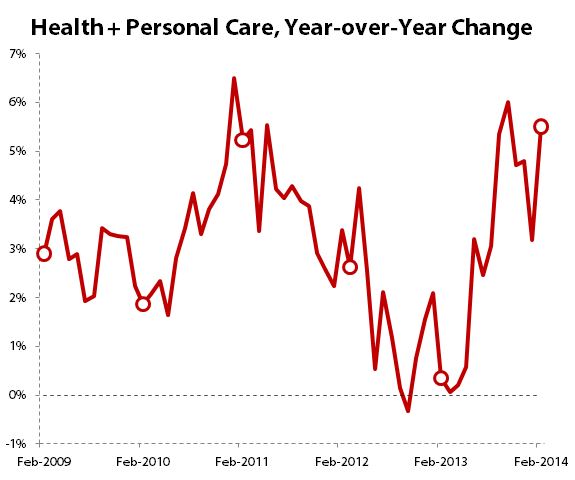 This sector is rare in that it has never experienced more than two consecutive months of year-over-year declines in more than two decades of tracking, and in fact during those decades of tracking the health and personal care retail sector only experienced one month of decline, period. This rebound should be encouraging to any investors who thought that Obamacare might make it harder for health care to grow, but that doesn't mean CVS will necessarily be the rebound's leading beneficiary. The pharmacy chain's quarterly revenue growth has barely kept pace with sector revenue growth since last year's low -- but it's still doing quite a bit better than Dow drugmakers Pfizer and Merck, which ought to gain from more pharmaceutical sales, but which have both suffered declining sales since 2012: 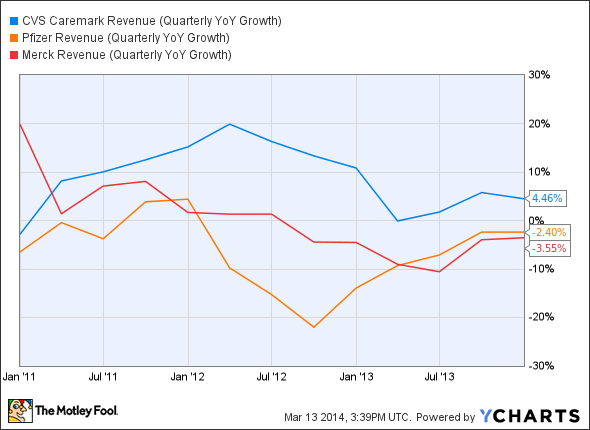 On balance, this is not a great retail sales report, and it could be an early sign of an oncoming recession if the weakening trend continues.