Warren Buffett's Berkshire Hathaway (NYSE:BRK.B) (NYSE:BRK.A) shareholder letter is out -- and with $58 billion and 83 years to his name, the Oracle of Omaha has a lot to say. Here are the seven juiciest quotes from Buffett's wise words.

1. "After all, you could always own an index fund and be assured of S&P results."
Warren Buffett is usually first in line to point out the stupidity of most market minions, but his comparing of himself to the S&P 500 (SNPINDEX:^GSPC) or one of its many index funds is laughable. In the past 20 years, Berkshire Hathaway stock is up 1,000%, smoking the S&P's returns. 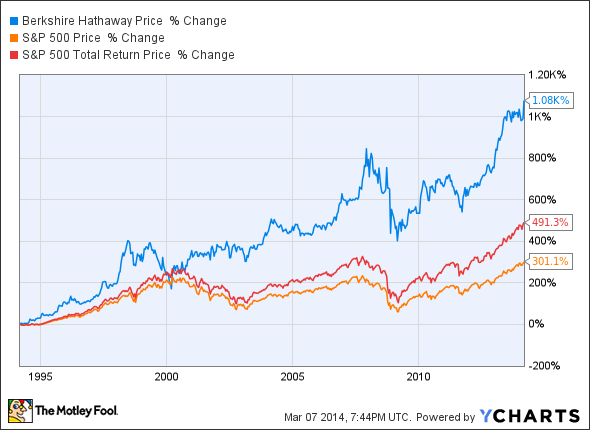 Some businesses are built on desires -- Berkshire Hathaway's Geico is built on necessities. Its auto insurance offerings are what people need at a price they can afford, and Berkshire Hathaway knows it. Its massive market share has helped create a nearly impenetrable competitive moat, while the "little gecko continues to tell Americans how Geico can save them important money."

3. "Both companies [NV Energy and H. J. Heinz] fit us well and will be prospering a century from now." 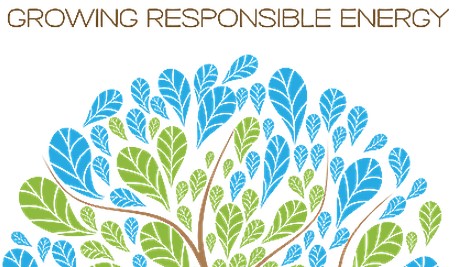 Sure, his nickname's the Oracle of Omaha, but can Buffett really see into the future a century from now? In the case of his $18 billion spent to acquire NV Energy (NYSE: NVE) and Heinz, he certainly things so.

4. "The [employment] increase ... included one person at our Omaha home office."

Last year, Berkshire Hathaway added 42,283 new employees to its ranks to hit a record total of 330,745. That's equivalent to the population of St. Louis or Honolulu. But in his obsession with shareholder value creation, that massive increase included only one hire at HQ. And just in case you were worried about fancy new Omaha offices, Buffett adds that the "gang still fits comfortably on one floor."

5. "A bull market is like sex. It feels best just before it ends."

OK, so technically emerging-market mastermind Barton Biggs said it first, but Buffett quoted him in his letter to shareholders to make an important point: Timing is everything. Paying too much for anything is a bad idea, and "know-nothing" investors often invest everything when stocks are soaring too high. In a not-so-subtle allusion to his sexual simile, Buffett notes that "satisfactory results" are the most any wise investor should hope for.

While Buffett enjoys a five-minute commute in his Cadillac DTS, that doesn't stop him from promoting Berkshire-owned private-jet company NetJets for his shareholder conference attendees.

7. "Could anyone really believe the earth was going to swallow up the incredible productive assets and unlimited human ingenuity existing in America?"
In case you're wondering, it's a rhetorical question. Buffett asked this in dismay as millions sold their stocks in 2008 -- but Buffett held faithfully on. And in just half a decade, the Oracle of Omaha was proved right. From a peak just before 2008, shares are up around 35% -- and have kept up solidly with the S&P 500's (SNPINDEX:^GSPC) returns over the same period. 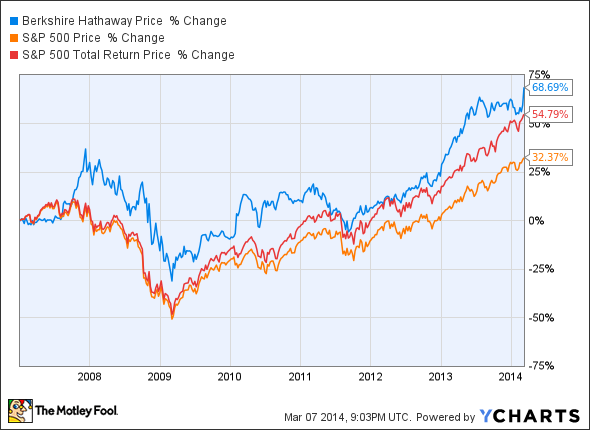