The solar sector has seen blazing returns over the past year, and perhaps Canadian Solar (NASDAQ:CSIQ) demonstrates this best. Prior to releasing fourth quarter earnings, the company was a 10-bagger, up over 1,000% during the previous year. After what some felt was an unimpressive quarter, shares have dropped nearly 20%. Is this a buying opportunity, or the start of an even further drop?

A strong pipeline
Investors may have been disappointed with the recent earnings release, but the future looks bright for Canadian Solar. Totaling 4.5 GW, the company's pipeline is strong, especially in the Canadian (477 MW) , U.S. (164 MW), Chinese (290 MW), and Japanese (329 MW) markets. Growth in these markets is essential as the company looks to concentrate on markets outside of Europe, where the solar market has slowed down considerably. The company is on the right track -- of net revenue in the fourth quarter, Europe only accounted for 5.5%, which is a decrease from 9.5% in the third quarter and 40.6% in Q4 2012.

Back in black
Of the Tier 1 Chinese PV manufacturers, many operate at a loss -- further in the past, Canadian Solar was no different, unprofitable for over two years. However, in the third quarter, Canadian Solar demonstrated a return to profitability, and this continued in the fourth quarter. Although diluted earnings per share dropped from $0.56 in the third quarter to $0.39 in the fourth quarter, the full year results are what's really impressive. For 2013, diluted earnings per share was $0.63 compared to a loss of $4.52 per share in 2012; nonetheless, the market didn't find these numbers encouraging, believing that the $0.63 diluted EPS was a disappointment -- analysts' estimates were $0.84. 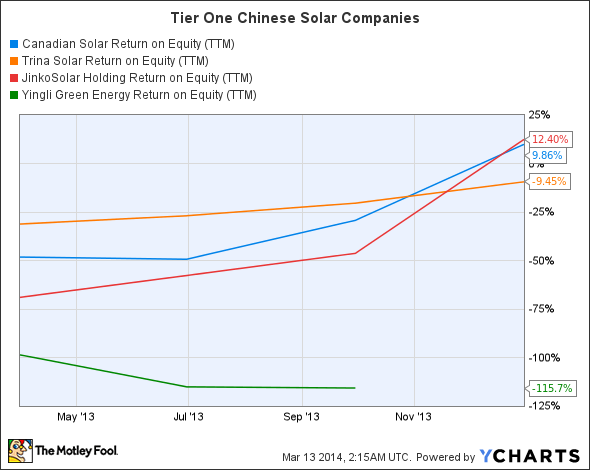 Failing to meet estimates doesn't detract from the company's success for the year. Further validating the company's profitability is its return on equity, which at 9.86% over the trailing twelve months outshines some industry stalwarts: Trina Solar (NYSE: TSL) and Yingli Green Energy (NYSE: YGE). Trailing behind Jinko Solar (NYSE:JKS) is not too shabby either -- Jinko Solar's diluted income per ADS for 2013 was $1.28.

Looking down the road
The sun doesn't shine forever. Once the company released guidance for the first quarter of 2014, shares took a further hit. Management attributes the lower guidance to the difficult winter North America has endured. Delaying construction and the recognition of approximately $100 million in revenue from some utility-scale projects in Canada, Canadian Solar expects gross margins to drop to between 14% and 16%, while module shipments will range from 470 MW to 490 MW. Total revenue is expected to be between $415 million and $430 million. Despite the expectation that the weather will adversely affect first quarter results, the company asserts that the losses will be made up for in later quarters. For the full year 2014, the company expects net revenue to be between $2.7 billion and $2.9 billion -- a marked improvement over the $1.65 billion it earned in 2013 and the $1.3 billion in 2012.

Foolish final words...
Investors often dream of their holdings reaching 10-bagger status, so for Canadian Solar to realize that in one year is pretty impressive. For those who got in early, they were handsomely rewarded for their belief in the company. Is it too late for investors to get in now? I don't think so. Strong earnings for the previous quarter and full year, albeit missing analysts estimates, suggest that the company is on the right track. As fearful investors jump ship, now might be the time for investors to be greedy with this promising PV manufacturer. Investors, though, will have to dig deeper to decide for themselves.