Wells Fargo (NYSE:WFC) certainly has made the most of the recovery in housing over the past five years, reaching record levels of earnings for the last 11 quarters. However, investors may be overlooking the enormous glut of homes in foreclosure that are still stuck on the bank's balance sheet: those are going to have to be sold back into the market eventually, and Wells may not have a lot of control on how much is paid for them. Could these distressed sales result in an end to Wells Fargo's amazing streak?

That's a lot of loans to foreclose!
Recent data released by SNL Financial indicates that Wells Fargo has nearly $20 billion worth of one- to four-family home loans currently in the process of being foreclosed. While this represents less than 1.5% of the company's total assets, this is an astonishingly large number when considering that it only includes homes that are actively involved in foreclosure proceedings.

It is true that the foreclosure crisis is behind us in most of the country, but a lot of what we're seeing here is homes whose owners stopped paying the mortgage long ago, but the banks are just getting around to the actual foreclosure proceedings due to a backlog. This is especially true in the hardest-hit areas, such as Florida, where in some cases homeowners have lived in their homes for several years without paying a dime while waiting for the banks to foreclose.

What this could mean for Wells
As it stands right now, this shouldn't affect Wells' performance too much, and as long as the real estate market either stays the same or improves.

Banks tend to plan for losses ahead of time. For instance, since the crisis hit, the big banks have been holding billions of dollars in reserve in anticipation of legal settlements, so when it actually happens it's not as much of a blow to earnings. Although JPMorgan Chase's massive settlements looked awful as headlines, the bank actually had more than enough stashed away, and will actually probably end up with money left over in their "settlement fund."

The same is true here, although real estate is a much more dynamic market. Wells Fargo is planning for these foreclosures using the current market value of the homes represented by the delinquent mortgages. So, if the real estate market remains stable while these foreclosures play out, Wells Fargo will foreclose on and sell the homes just as they are planning to do. Also, if home values continue to rise, as they have been doing, the company could actually end up coming out ahead, selling the homes for more than anticipated.

What concerns me as an investor is what could happen if real estate has a significant correction, either due to rising interest rates or some other economic factor. The average U.S. home price has risen by almost 15% since 2011 with no downward movement whatsoever. In fact, the gains seem to be speeding up. According to a report by the Wall Street Journal, 2013 saw the sharpest one-year gains in home prices since 2005, and while I don't really think that we'll see another housing market meltdown anytime soon, let's not make the pre-crisis mistake of assuming real estate will go up forever. 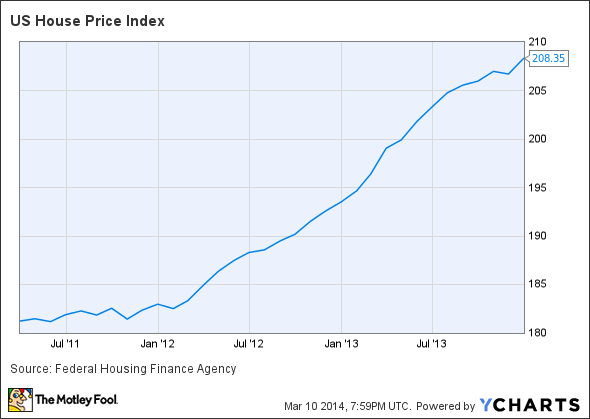 Will the housing recovery continue, or will prices fall?
According to a recent study by the Demand Institute, the best of the housing recovery may now be over. The study suggests that over the next five years, average home prices will only appreciate at an annualized rate of 2.1% and that the gains will be very location-specific.

Most experts believe that mortgage rates will continue to rise this year, although at a steady, more controlled pace than we saw in the second half of 2013. Glenn Somerville of Kiplinger's recently wrote that he expects rates of between 5% and 5.5% this year, and most other industry experts seem to agree.

I would say that the absolute worst case is that interest rates spike to the mid-5% range, which I think could cause home prices to drop by 5% or more, as it affects the price of homes that buyers can afford.

This type of decline would mean that Wells' $20 billion in foreclosures are worth about $1 billion less. This would represent about 4% of the company's annual profits and could cause a share price drop of around the same amount.