Here come the bots
Bill Gates says robots are coming for your jobs. Via Business Insider:

"Software substitution, whether it's for drivers or waiters or nurses ... it's progressing. ...  Technology over time will reduce demand for jobs, particularly at the lower end of skill set. ...  20 years from now, labor demand for lots of skill sets will be substantially lower. I don't think people have that in their mental model."

Warren Buffett told CNBC on Friday he would be "surprised a lot" if stock prices around the world fell 50 percent from their current levels in the near future.

He predicted there will be another financial crisis "someday" in the years ahead that will shock financial markets, but he doesn't think it will happen anytime soon.

"Humans will behave in crazy ways, both on the upside and the downside in the next 50 years. It's very unlikely they do it in the next few years because after something like 2008, once they get out of the emergency room, they're a little more careful for a while."

I was told there would be no math
Economist Justin Wolfers tweeted a graphic showing international math scores against the proportion of students who report being happy in school: 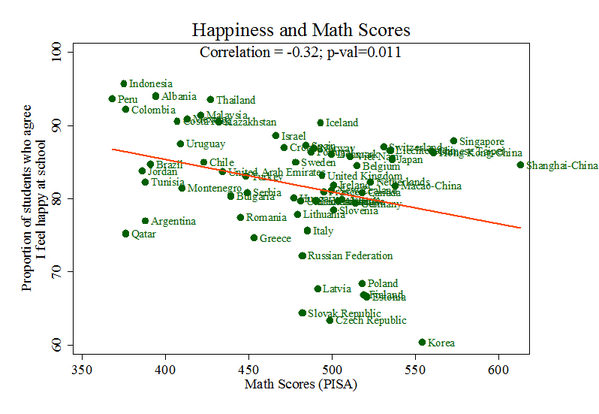 "Why we are not really all doomed."
The blog Mr. Money Mustache has a great article on progress:

So what do you when you see people flailing their arms and saying things like, "We're doomed! The Fed's rate of QE is unsustainable and the resulting debt Armageddon is going to plunge us into hyperinflation!" you could substitute the words, "We're doomed! China's production of nailguns is unsustainable and we will all soon be plunged into hand-driving nails again forever!"

The nailguns are not going anywhere. We have figured out how to make them, and that knowledge will never be lost. This human invention has forever raised our productivity and can never be taken away.

Concentration
Derek Thompson of The Atlantic shares an amazing chart showing where 50% of American GDP comes from (orange parts): Coaching, which decades ago migrated from the playing field to the executive suite, has been slow to penetrate high finance. That's beginning to change as traders and fund managers scramble for any edge they can find following five years in which many actively managed funds failed to beat broad market indexes.

You name the event -- Boston bombing, GOP debate, Olympic ceremonies, Grammys and Oscars, Super Bowl, starlet meltdown, high speed chase, a big athlete gets traded, a storm hits, a season finale shocks us, etc. Twitter is where we all go for the event. The surge in messaging happens and so does an uptick in engagement. The Twitter stream literally comes alive in real-time in a way that CNN's screen never could. We may have the TV on in the background, but we're all on our tablets and phones, scrolling Twitter, when the big thing happens.

The largest U.S.-based companies added $206 billion to their stockpiles of offshore profits last year, parking earnings in low-tax countries until Congress gives them a reason not to.

The multinational companies have accumulated $1.95 trillion outside the U.S., up 11.8 percent from a year earlier, according to securities filings from 307 corporations reviewed by Bloomberg News.