The last few weeks have been rough for top cryptocurrency Bitcoin. Immediately after Mt. Gox crumbled and lost 850,000 Bitcoins ($472 million when initially reported), malicious hackers robbed other exchanges such as Flexcoin and Poloniex.

Warren Buffett then notably stated that Bitcoin was "not a currency" -- a view echoed by Goldman Sachs (NYSE:GS), which also eviscerated the idea of Bitcoin as a currency in a recent report. To top all that off, the Financial Industry Regulatory Authority (FINRA) issued an investor alert titled "Bitcoin: More Than a Bit Risky," warning investors of massive price fluctuations and recent hacks.

Yet despite all of these red flags, Bitcoin supporters are still enthusiastic about the future of the virtual currency. A new incubator in Silicon Valley, known as Boost VC, aims to accelerate the growth of the Bitcoin industry through payment processors, exchanges, mining companies, and retail businesses.

Boost VC has a goal of accelerating 100 Bitcoin companies over the next three years -- a lofty target considering that current Bitcoin problems indicate that tighter regulations are sorely needed.

Why accepting Bitcoin is just free publicity
Bitcoin supporters are quick to mention that an increasing number of businesses -- including Overstock.com (NASDAQ:OSTK), Zynga (NASDAQ: ZNGA), and Tesla (NASDAQ: TSLA) -- are accepting Bitcoin.

What Bitcoin actually represents is not additional revenue, but free publicity.

Not only has Overstock laid claim to being the "first online retailer to accept Bitcoin," it also gains plenty of free exposure across media outlets that report on trending stories about Bitcoin. It suddenly makes Overstock, which is frequently overshadowed by Amazon.com (NASDAQ:AMZN) and eBay (NASDAQ:EBAY), look like a hip, tech-savvy underdog.

However, eBay's PayPal president David Marcus clearly stated last December that Bitcoin should not be considered a currency due to volatility and regulatory issues. eBay has also had major security issues regarding Bitcoin in the past.

Over the past year, eBay and PayPal were hit by numerous hackers, who stole legitimate PayPal accounts to buy Bitcoins on eBay and transfer them into their own digital wallets. In response, eBay started cracking down on virtual Bitcoin merchants, although sales of Bitcoin miners and mining contracts are still allowed.

The use of Bitcoin as a publicity tool rather than a currency is obvious when we take a closer look at smaller businesses such as barbers, grocery stores, and coffee shops -- all of which profit from free advertising on news outlets rather than the actual use of Bitcoin at its stores.

Why volatility matters
Many people who believe that Bitcoin is a currency will likely think twice before paying for their dinner with shares of their favorite stock. Yet considering that Bitcoin jumped from $47 to $1,000 before declining to around $640 over the past 12 months, it would probably make more sense to pay for dinner using the stock instead of Bitcoin.

People are reluctant to pay for anything using stock for a simple reason -- it might be worth considerably more in just a few months. Vendors aren't willing to accept stock as a direct payment for an equally simple reason -- it could be worthless in a year.

Meanwhile, the volatility that national currencies experience can usually only be felt in three ways -- traveling abroad, importing and exporting products, and long-term inflation. None of these price swings come anywhere close to Bitcoin's volatility, as illustrated in this chart from the aforementioned Goldman Sachs report on Bitcoin: 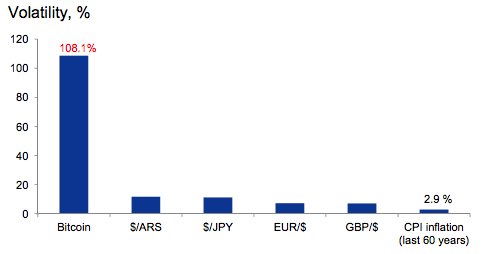 Bitcoin's volatility is closer to a volatile stock than any real currency. (Source: Goldman Sachs)

There's no way for a currency that volatile to ever gain widespread adoption. Consider the case of Laszlo Hanyecz, a Florida programmer who bought two pizzas for 10,000 Bitcoins back in 2010. That turned out to be the most expensive meal he would ever have in his life, since those 10,000 Bitcoins are worth a whopping $6.3 million today.

The bottom line
In a previous article, I mentioned that Bitcoin needs to establish trust, better security, and be more closely regulated to evolve. There's simply no way for Bitcoin to be taken seriously as a real currency considering that its exchanges are not insured in any way, its security safeguards are opaque, and it is more volatile than many penny stocks.

Until then, all the headlines about retailers accepting Bitcoin is just noise, intended to generate publicity for the business by piggybacking off of the public's unending fascination with Bitcoin and other virtual currencies. Unfortunately, all of this noise is obfuscating the raw truth -- that Bitcoin is simply not a currency.