Using data from Russia's Gazprom and Eastern Bloc Energy, the Administration estimates that 16% of all natural gas consumed in Europe heads through Ukraine's pipes at some point.

The reason is simple: Russia provided 30% of Europe's 18.7 trillion cubic feet of natural gas last year, and around half of that finds its way to Western Europe through three Ukranian pipeline networks.

(1) Dubbed the Bratstvo ("Brotherhood" in Russian), Russia's largest pipeline heads through Ukraine before dividing into two separate systems for North and South.

(2) The Soyuz ("Union" in Russian) pushes Russia's fuel to Central Asia, as well as Central and Northern Europe. 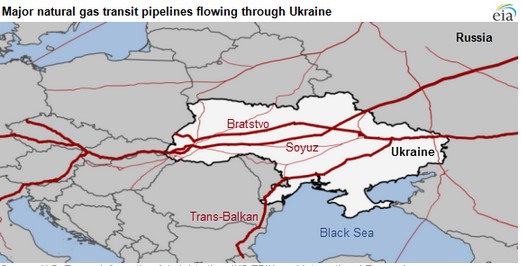 While 16% is a sizable percentage, the portion used to reach as high as 80%. But since Russia brought its more direct Nord Stream pipeline online in 2011, it's opted to send a sizable amount to Germany via the Baltic Sea.