Please ensure Javascript is enabled for purposes of website accessibility
Free Article Join Over 1 Million Premium Members And Get More In-Depth Stock Guidance and Research
By Todd Campbell - Mar 14, 2014 at 9:30AM

Alnylam (ALNY) has completed its acquisition of Merck's (MRK) RNAi business, handing over a 3% ownership stake in the company.

The Merck deal caps off a busy couple months for Alnylam that also included Sanofi ( SNY 0.17% ) taking a 12% equity stake in the company.As a result, shares have had a big run since December. 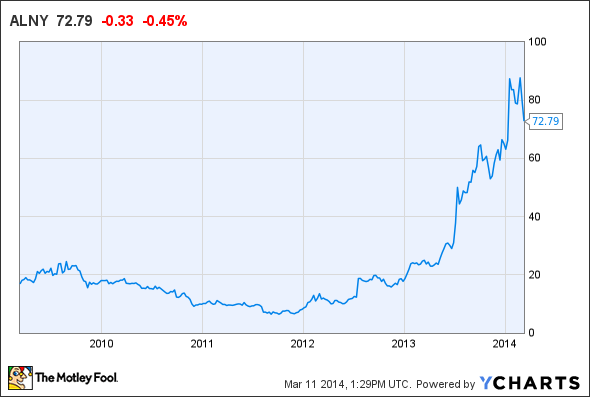 RNAi's musical chairs
The acquisition strengthens Alnylam's IP assets, and protects access to key Tuschl RNAi patents it already controls, and had sub-licensed to Merck as part of a previous legal battle.

In exchange for those assets, Merck got $25 million in cash and a more substantial 2.5 million share stake in Alnylam, amounting to a 3% ownership position.

It's unclear whether Merck will sell the shares or hang on to them. Roche received a 10% equity stake in Arrowhead in their deal, but based on SEC filings appears to have worked out of the stake in 2012.

If Merck does hold onto those shares, it will join Sanofi as a deep-pocketed big pharma partner in Alnylam. Sanofi has been a partner since 2012 when it paid Alnylam $23 million up front for rights to sales of Alnylam's transthyretin, or TTR, targeting drugs in Asia. Sanofi significantly expanded that deal in January, paying a 27% premium to pick up a 12% equity stake in Alnylam.

For Merck, the equity stake is a consolation prize. After all, it spent $1 billion buying Sirna back in 2006, only to give up on it five years later when it realized it would take longer than hoped to commercialize the technology.

Sanofi's stake endorses RNAi's (albeit delayed) potential
Alnylam is one of a few companies committed to developing RNA interfering technology that could usher in a new paradigm in treating disease. By rewriting genes to control protein production, these approaches offer the potential to reduce side-effects tied to unplanned interactions with non-targeted pathways, while also ensuring more of the drug payload is delivered to the target.

At Alnylam, a treatment for amyloid diseases is close to realizing that potential. The company's TTR program uses nano-particle technology -- likely in the form of Arrowhead dynamic polyconjugates (thanks to Roche) -- to reduce protein buildup in organs like the liver and heart.

A phase 2 trial of ALN-TTR02, or patisirin, lowered serum levels by up to 96% in familial amyloidotic polyneuropathy, or FAP. That compound has since moved into phase 3 trials, landing the company a $7 million milestone payment from Sanofi. If phase 3 trials produce similar results, and Alnylam and Sanofi eventually receive an FDA approval, the drug will compete against Pfizer's Vyndaqel, which has been sold in the EU since 2011.

Alnylam and Sanofi are also studying ALN-TTRsc for familial amyloidic cardiomyopathy, or FAC. That drug is in phase 2 and data is expected to be reported from that trial late this year. The two are also working on a hemophilia treatment, ALN-AT3 which is currently recruiting patients in a phase 1 trial.

Fool-worthy final thoughts
Merck may be taking an "all-is-not-lost" approach to RNAi, hoping that shifting those assets to a leader in the space can eventually help it recoup some of its original investment. Since share prices in RNAi companies like Alnylam and Arrowhead have soared this year, it must tempt Merck to unwind its new equity stake. However, investors may be better served if they hold onto it, so we'll need to watch Merck's filings to see if they sell or keep the position.

Since Sanofi just paid up for its stake in Alnylam, they appear in it for the long haul. Investors will have to wait to learn whether that's a smart bet given the primary completion date for the phase 3 FAP trials is 2017.