There may not be a more interesting consumer goods sector than the beer market right now. Overall U.S. sales volumes of beer dropped roughly 1.4% in 2013, but investors remain intrigued because buried deep within that number is a rapidly growing craft beer segment. Should investors abandon shares of Anheuser-Busch InBev (NYSE:BUD) in favor of smaller outfits like Boston Beer (NYSE:SAM), and Craft Brew Alliance (NASDAQ:BREW)? There are a few factors to consider about the beer industry as a whole before deciding which stock is the best bet for the long run. Today we're examining three charts to get a better understanding of the big picture.

Chart No. 1 -- Alcohol consumption
Declining sales volumes from increasing competition from wine or liquor have some investors worried. In reality, that competition can be battled with effective marketing techniques. A greater fear would be a shift in the majority of the population from drinking to nondrinking. How would brewers combat a trend like that without appearing morally reprehensible? Fortunately, Americans are just as thirsty for alcohol as we've always been. In fact, the consistency of our consumption pattern is fascinating: 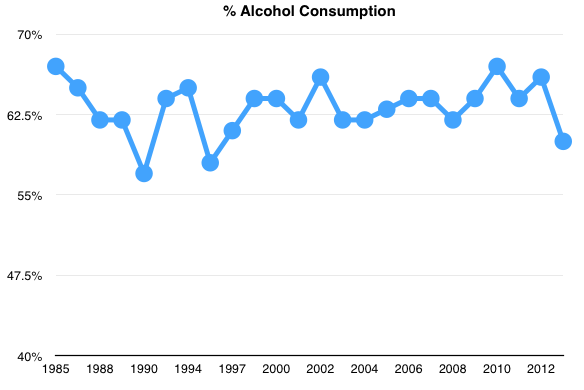 According to Gallup polls stretching back to the 1940s, the percentage of Americans consuming alcohol has never risen higher than 71%, nor dropped lower than 55%. Looking only at the past 20 years, the high for consumption was the 67% reached in 2010, while the low was 58%, hit in 1996. In other words, the majority of Americans consume alcohol and have for quite some time.

Again, it's worrisome for beer investors that sales volumes have ticked lower over the last year, but by no means is this "game over" for the industry. It simply means companies need to start thinking again. For example, Anheuser-Busch InBev is attempting to regain some of its momentum by buying up craft breweries and innovating new products like the Bud Light Lime-a-Rita family, which has proven to be very successful.

Chart No. 2 -- Consumption mix
Now that we've determined that the majority of Americans will likely consume alcohol going forward, let's drill down on beer consumption specifically. By volume, more beer is sold at retail locations, or what's known as off-premise, than in bars or restaurants, considered on-premise sales. In fact, it's a great deal more: 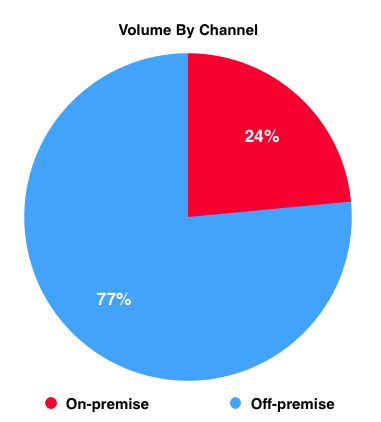 This simple chart is important for one big reason, and that has to do with the package mix available at retail locations versus bars and restaurants. By and large, cans and bottles make up the bulk of off-premise sales, while kegs account for the bulk of on-premise sales. An excerpt from Boston Beer's most recent 10-K filing indicates why understanding this breakdown is so important for investors:

Assuming the same level of production, a shift in the mix from bottles and cans to kegs would effectively decrease revenue per barrel, as the price per equivalent barrel is lower for kegs than for bottles and cans.

This chart shows us that even if U.S. alcohol consumption stays steady but the method of consumption shifts from off-premise to on-premise, it could have a significant impact on brewers' profits.

Chart No. 3 -- Industry growth
The last chart comes to us from the Brewers Association, the craft beer trade group that tracks a number of different statistics for the industry.

According to the association, as of last summer there were 2,538 breweries operating in the United States, and 2,483 of them were craft breweries. According to its 10-K filings, Boston Beer thinks the number of American breweries is closer to 4,500, while Craft Brew Alliance pegs the number at 3,699. Regardless of the actual count, the growth is impressive, and it has come quickly. Now many are wondering if it's all too much, too soon. Is there a beer bubble? Is there any room left for more growth?

There are several counterarguments to the idea that the industry has reached its saturation point, but perhaps the most compelling one refers to our domestic wine consumption. There are somewhere in the neighborhood of 7,000 wineries spread across the United States, leaving plenty of room for growth if the brewing market were to approach the same size. This is especially relevant given that wine volumes in the U.S. have grown for 19 straight years. Clearly, the high number of vineyards has not affected volumes in a negative way.

It is reasonable to assume that growth may slow, but don't be surprised if the industry continues to expand over the next few years.

Bottom line
There are plenty of factors to consider when evaluating the best players in the $250 billion U.S. beer industry, many of them unique to the businesses themselves. But investors would be wise to take a look at the intricacies of the industry as a whole before getting bogged down in financial metrics that may not give the best indication of how successful a brewer can be in this industry.