Bank of America (NYSE:BAC) is a household name and one of the most publicized and scrutinized banks in the world, but here are five things you likely didn't know about the banking behemoth.

Bank of America shelled out $4.7 billion in taxes to the federal government this year, which is less than the $10.4 billion doled out by Wells Fargo (NYSE:WFC) and the $6.0 billion at Citigroup (NYSE:C). Yet it's important to see both Citigroup and Wells Fargo had higher pre-tax net income, and they all  had relatively similar effective tax rates:

This was only the second time in the last five years that Bank of America paid taxes, and it realized total income tax benefits of $4.7 billion to its net income in three of the previous four years: 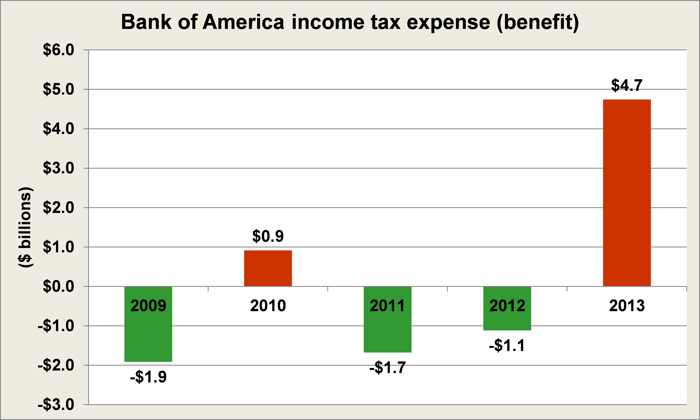 Many will likely be upset that Bank of America received an income tax benefit, but it's also important to remember it is likely happy it paid taxes because, after all, its pre-tax income of $16.2 billion was 2.75 times higher than the previous four years combined ($5.9 billion).

Yet to the relief of the common shareholders, things turned around in 2013 and its net income available to shareholders grew to a staggering $10.1 billion. 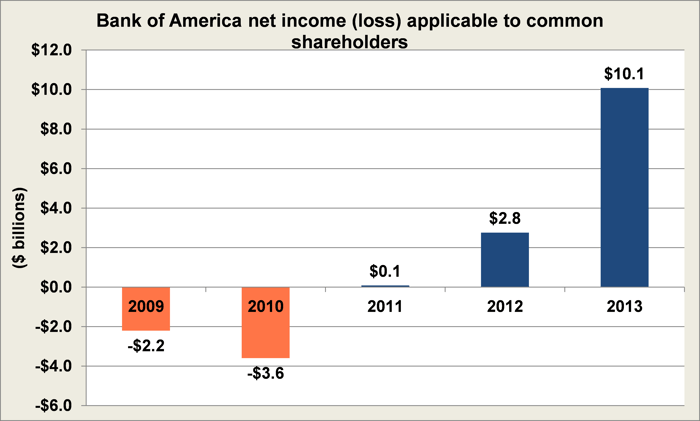 3. It's actually 1,319 companies
Interestingly enough, every company has to report its direct and indirect subsidiaries in SEC filings, and it turns out Bank of America has 19 pages worth of subsidiaries that all roll into Bank of America Corporation. A lot of these are the result of regulatory and legal requirements, so it isn't dishonesty on the part of Bank of America; it's simply the way the companies -- particularly banks -- have to do business. And while 1,319 sounds like a lot, it's less than the 1,547 the bank had last year and only nine ahead of the 1,310 reported by the "simpler" Wells Fargo.

4. Its share count is way up
Since 2009, one little-known fact about Bank of America is that its common shares outstanding have risen by almost 50%, to 11.5 billion: 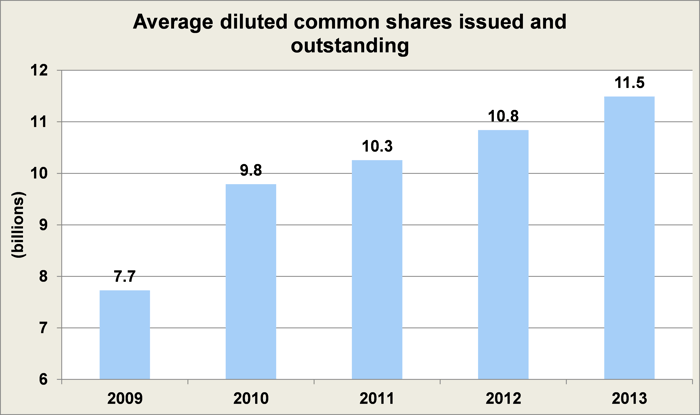 Certainly, the shareholders are likely to be relieved that income available to them is also up.

5. Nearly 4 million new credit cards were issued
In 2012, Bank of America reported it was able to issue 3.3 million new credit cards, a solid increase of 7% over 2011 issuances of 3 million. However, the growth in 2013 was remarkable, as it grew its new accounts opened to 3.9 million, an increase of more than 20% over 2012 levels. While this may worry many that it is undertaking too much risk, it turns out that Bank of America not only saw its accounts rise but its risk-adjusted margin also increased from 7.5% to 8.7%.

Altogether, Bank of America had a number of interesting and insightful things happen to it in 2013, and each of them prove it is continuing on its road to recovery. Undoubtedly, shareholders are particularly pleased.