Recently, Safeway (NYSE: SWY) announced that it had entered into an agreement with Cerberus Capital to merge with its subsidiary Albertson's. Cerberus previously purchased Albertson's and a number of other brands from SUPERVALU (NYSE:SVU) last year, and under this new agreement it will acquire all outstanding shares of Safeway for a total value estimated at $40 per share.

Although Safeway has been looking for a buyer, shareholders are likely to be unhappy with this deal -- $40 per share offers essentially no premium over what the share price already was. Rumor has it that Kroger (NYSE:KR) is also interested in buying Safeway and may make a slightly higher offer, but the current one barely values Safeway at an enterprise value of 7 times EBITDA -- with an initial offer that low, Kroger is under no pressure to do much better.

This deal creates a number of problems for other players in the traditional grocery industry, especially SUPERVALU, which will face increased competition from the combined companies.

From Hell's heart I stab at thee
I'll admit it -- the deal hardly vindicates my CAPSpicks on the traditional grocery industry. In November 2012, I declared that Safeway's stock would underperform the market over the next few years, before it went on to outperform the market by more than 100 percentage points. But at the same time, the deal doesn't really vindicate Safeway bulls, either, who ignored its years of stagnating revenue and income, focusing instead on its rock-bottom valuation multiples. Well, the company is now being bought out at essentially the same EV/EBITDA as when I made my underperform call.

My underperform call on SUPERVALU has done about as well as the one for Safeway, but I continue to be bearish on the company. The same problems hold true for SUPERVALU, because it is fundamentally the same store as Safeway. Both are nondescript, mid-range grocers; both have watched revenues decline for years; and both have tried to hang on by selling off various segments for quick cash. These stores are in decline because of competition on all sides by premium retailers like Whole Foods, deep-discounters like Dollar Tree (NASDAQ: DLTR), and one-stop-shops like Wal-Mart. 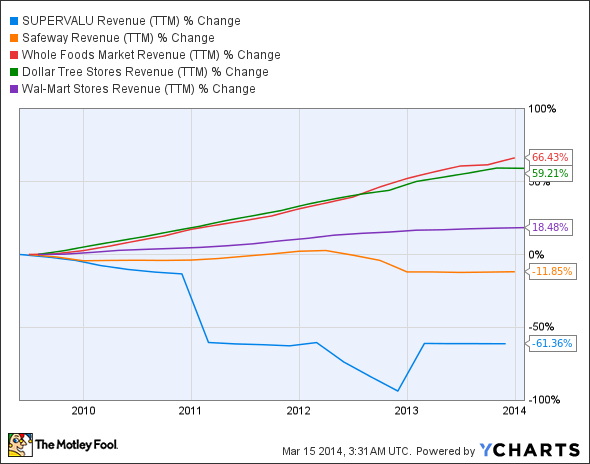 In SUPERVALU's most recent quarter, the only two segments that saw any revenue growth were Save-A-Lot and Corporate. Admittedly, Save-A-Lot grew comparable store sales by 1.7%, which isn't much, but it beats the 1.2% that boosted Dollar Tree to a record quarter. Unfortunately, Save-A-Lot only accounts for a quarter of total sales, and it wasn't enough to offset declines in the company's wholesale distribution and traditional grocery segments.

Gross margin improved during the quarter, but management says that was "primarily driven by incremental fees earned under the TSA and the benefits of lower infrastructure costs." Lower infrastructure costs are a good sign of improvement, but the TSA fees are ephemeral. The company is simply collecting a temporary consulting fee as part of its deal with Cerberus, a fee that will phase out in a few years and isn't a sign of any real improvement in the company's business.

The shape of things to come
While it's unclear whether SUPERVALU is looking for a buyer currently or if it's content for now with last year's sale of five of its brands, the Safeway deal sets a bad precedent and should have SUPERVALU investors worried. The company is currently valued at around twice what Safeway is selling for, giving potential buyers a deep floor to consider.

Furthermore, a Safeway-Albertson's marriage will create a formidable team, with around 2,600 stores, compared with SUPERVALU's 2,400. The sheer size of the merger will give the combined companies significant negotiating power that SUPERVALU previously didn't need to worry as much about. Even if the Safeway deal doesn't immediately affect SUPERVALU's valuation, it will pose a competitive challenge in the years to come.