New IPs are risky propositions in the modern gaming industry. The power that established franchises carry on the market makes it difficult for fresh faces to carve out their own spaces, and the skyrocketing development costs of the current and previous console cycles mean that publishers are justifiably hesitant to green-light titles that won't generate guaranteed returns.

Installments in major franchises eventually start to lose their luster, however. With the notable exception of the "Grand Theft Auto" series from Take Two Interactive (NASDAQ:TTWO), last generation's heavy hitters are starting to show their age as they return diminishing sales on the market. This trend threatens Ubisoft (OTC:UBSFF) more than any other games publisher.

"Assassin's Creed" is Ubi's marquee property, and sales of the most recent installment are down substantially over those of the preceding title in the series. Ubisoft's total third-quarter software sales were down 35% over those from 2012. Ubisoft's outlook looks even bleaker because its premier foray into new IP could be a massive flop. Watch Dogs could quickly go from being one of the hottest new properties in gaming to an industry-wide laughing stock.

Watch Dogs pulls an old trick
When Ubisoft first demoed Watch Dogs in 2012, its incredible visuals sent waves through the gaming press and online communities. The title was broadly put forth as an example of the promise inherent to the new console hardware. That the game was also slated to hit last-gen consoles was mostly brushed aside, as has frequently been the case in the marketing lead-ups to cross-generational titles. Now, leaked footage of the game has shown that the real Watch Dogs may lack much of the visual splendor featured in its 2012 unveiling.

Ubisoft PR has stated that the idea of a graphical downgrade is ridiculous, but the messaging on the matter is mixed. Ubisoft representatives weighed in on the controversy to assure fans that the final product on the Sony PlayStation 4 would match the game's 2013 E3 demo. The problem here is that many already viewed that build as a substantial downgrade from the 2012 demo.

Roll over and over and over
If the issues with Watch Dogs were limited to a drop-off in graphical quality, Ubisoft might not have much to worry about. Potentially misleading debuts are no rarity in the gaming industry. While initial speculation on the game's delay mostly suggested that the push was done to give Dogs some breathing room amid tough competition like Grand Theft Auto 5, it's now clear from the company's own statements that the title had major quality issues. The lead designer of Watch Dogs recently revealed that the title would likely have been viewed as too repetitive if it had launched in 2013.

Is Dogs dead on Wii U, or just paused?
According to Ubisoft, the Nintendo (OTC:NTDOY) Wii U version of Watch Dogs has been "paused" and a release in 2014 is only a possibility. The development resources allocated to bringing the title to Nintendo's latest console have supposedly been shifted to help get the other versions into shape.

The company maintains that the game will still hit the Wii U, but there are good reasons to doubt the validity of these statements. Sales of the console have been abysmal, and M-rated games are not typically strong performers on Nintendo platforms. Expect the Wii U version to be quietly canceled after the title has debuted on other platforms.

Grand Theft Auto could be best in show
A number of retailers are stating that versions of Grand Theft Auto 5 will be hitting PlayStation 4, the Microsoft Xbox One, and the PC sometime this year. This gels with leaked code from the Xbox 360 version of the game that suggested ports to the new systems were in the cards. Rumors indicate that Take-Two subsidiary Rockstar Games will announce the new versions at this year's E3, a window that lines up closely with the May 27 Watch Dogs release date. 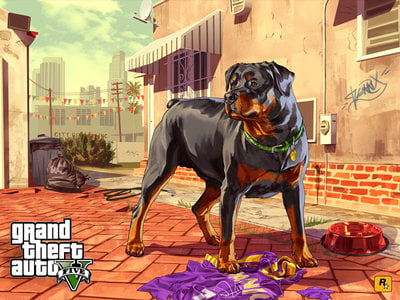 Ubisoft officials have already pointed out that the incredible critical and commercial success of GTA 5 has factored into the delay of the company's next big game. Comparisons between the two games were already unavoidable. If the reveal or release of new versions of GTA 5 coincides with the launch of Watch Dogs, Ubi looks to be the big loser.

No more dog puns
Perhaps more than any other entertainment business, positive critical reception in the gaming industry is important to commercial success. In addition, those who work on games frequently receive bonuses for achieving high scores on the review aggregate site Metacritic. Watch Dogs once appeared to be on track for surefire success, but there has been very little good news to speak of since the game's delay.

Modern video games have long development cycles for a reason, and it's unlikely that a title that was too broken and repetitive to ship on its initial date will have its issues resolved after a six-month delay. Content is king, and it's hard to imagine that the beleaguered Watch Dogs will steal the crown from "Grand Theft Auto."