United Rentals (NYSE:URI), the largest equipment-rental company in the world, announced that it will acquire National Pump in a transaction valued at no less than $780 million. As the second-largest pump-rental business in North America, National Pump will make a nice addition to United's operations and will allow the company to carve for itself a strong foothold in the oil and gas industry.

Terms of the agreement are rich!
According to United, its acquisition of National Pump will be completed using cash from existing sources as well as through the assumption of debt. With a purchase price of $780 million on top of contingent payments of up to $125 million should certain targets be met, the deal represents almost 11% of United's market cap.

Under the assumption that the business can still grow rapidly, United's management claimed that it expects National Pump's sales to double over the next five years. At first glance, this may seem like an amazing outcome, but there is great uncertainty tied to this assertion. And even if sales do rise significantly, they're unlikely to have a material impact on United.

You see, as a result of the acquisition, United doesn't expect its operating results to change all that much.

The transaction will be completed sometime during the second quarter of the year, which means that it will only be on the books for around six months in 2014. This means that the revenue United receives for half a year will be around $20 million.

Under the assumption that National Pump's sales aren't too different during the first half of the year, United will only be realizing sales of around $40 million from the business each year should its growth expectations fail to prove correct. In essence, this implies a price/sales for the company of 19.5 to 22.6 times, which is quite expensive. 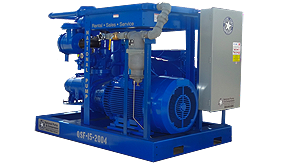 Can United even afford National Pump?
One problem with United's acquisition of the company is that all but $15 million of the initial purchase price will be comprised of cash. With $175 million of cash on its balance sheet, there is no doubt that the company will have to assume a significant amount of debt in order to make the transaction go through.

As of its most recent quarter, United already had approximately $6.6 billion in long-term debt on its balance sheet. This is so large, in fact, that the company's long-term debt/equity ratio currently stands at 3.2; meaning that, for every dollar in assets less liabilities, the business has $3.20 in debt. Fortunately, this level of debt is lower than the $10.5 billion held by Hertz Global Holdings (OTC:HTZG.Q), but it could mean trouble for the company moving forward. Hertz's debt implies a debt/equity ratio of 3.7.

Foolish takeaway
Based on the data provided by United, it looks like National Pump's high growth could make the company a worthwhile investment, but the downsides are numerous. On top of paying a very high multiple for the business, the company will become even more leveraged than it was in the past.

On the plus side, it looks as though United can afford some mistakes because of the fact that it is far more profitable than Hertz. But United is acquiring National Pump because it expects success, not failure. For this reason, combined with the fact that United looks more appealing than Hertz, the Foolish investor should feel somewhat comfortable about its deal but should be cognizant of any risks involved.