Last week we examined the importance of fuel economy for the typical consumer. While I might be in the minority when it comes to fuel efficiency, it's quite evident that the majority of consumers prefer improved gas mileage from their previous vehicle, and it's blatantly obvious from a government level that significantly better gas mileage is expected within the next decade or two.

However, I would contend that for families and some individual consumers a vehicles safety rating also ranks pretty high up on the list.

The importance of safety
According to the leading authority on automotive crash testing, the Insurance Institute for Highway Safety, or IIHS, the difference between a vehicle rated "good" versus "poor" can be enormous (for context, the IIHS ratings scale is: good, acceptable, marginal, and poor). In a moderate overlap front collision, which is where 40% of a vehicles' width strikes a deformable barrier at 40 mph, the driver in a vehicle rated good is 46% less likely to die than a driver in a poor-rated vehicle. Similarly, even a driver in an acceptable or marginal-rated vehicle is 33% less likely to perish than the driver of a poor-rated vehicle. That's how important this IIHS safety information can be to the consumer.

In IIHS' latest ratings, the agency divvied out 39 top-pick honors in 2014, of which all were given either good or acceptable ratings in their respective class. Clearly, some classes had better luck at bringing home top-pick honors than others. The minicar and minivan category only brought home one top-pick honor apiece while the small cars and midsize moderately priced cars categories brought home 10 and 12 top picks, respectively.

Five brands with some explaining to do
But there's always another side to every coin. In addition to its 39 top safety picks, after shuffling through the IIHS' copious ratings I was able to uncover 20 vehicles which had, in some form of crash test, received the highly dreaded "poor" crash rating.

There were certainly some surprises among this group. Perhaps none stuck out in my mind more than the Audi A4 which tested poor in the small overlap front impact test where 25% of the cars width is struck against a deformable barrier. The A4 did test as good in all other aspects of the IIHS tests, but the IIHS small frontal impact test notes that the structure of the drivers space was comprised, which likely would have led to a potentially serious hip injury for the driver.

Another shock was the 2013 tested Lexus IS 250/350 which had a similar failure to the Audi A4 in that there was noticeable structural collapse surrounding the driver in the small frontal impact. In this instance, the IIHS test would suggest serious foot and leg injuries to the driver could occur.

Despite these surprises, they didn't represent the worst of the worst. Of the 20 vehicles to receive a poor rating, five brands appeared at least twice. Some are lucky enough to get a partial reprieve since they brought home awards in other categories, while others may seriously have their reputations questioned based on these IIHS results.

These five brands are:

Nissan (OTC:NSANY)
Nissan finds its way into this dubious column with both the Nissan Sentra and Versa sedans receiving poor ratings for the small front impact test. This is substantial because Nissan's Sentra been crucial to its growth in U.S. markets, registering a 22.7% year-over-year increase in February by selling 12,339 vehicles. Since Feb. 2013, Nissan has actually improved its U.S. market share from 8.3% to 9.7%, but even CEO Carlos Ghosn understands this isn't going to be enough to get Nissan and its shareholders where it wants to be. It'll certainly want to focus on improving the Sentra's safety in upcoming models if it hopes to maintain that double-digit, year-over-year-growth potential.

On the other hand, Nissan did bring home top safety honors for the Altima, which was the third best-selling vehicle in the U.S. in February, behind only General Motors' Silverado pickup, and Ford's F-Series pickup.

Jeep
Owned by Chrysler, which is itself now a subsidiary of Fiat (NASDAQOTH: FIATY), Jeep failed to climb the mountain in two instances as well. Based on IIHS tests, the Jeep Patriot received a poor rating for the small frontal impact test while its two-door Jeep Wrangler received the lone poor rating of all vehicles and classes from the side impact test.

Known for its off-road capabilities and city-suburbanite ruggedness, most Jeep consumers probably aren't thinking about safety when they're purchasing these vehicles. However, with no top picks in any category and two red blemishes, Jeep may need to go back to the drawing board to redesign its vehicles in future models to make them safer, otherwise it could risk alienating some of its customers and driving them to a competing brand. 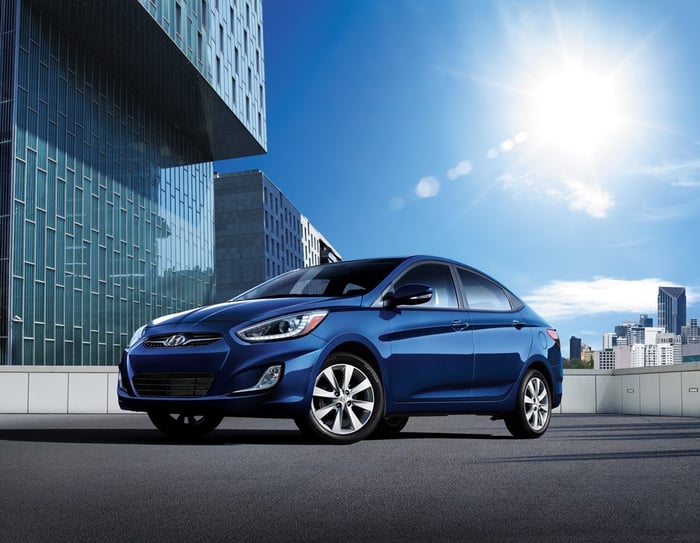 Hyundai (OTC:HYMTF)
Hyundai Motor Co., which tends to focus on bringing moderately priced midsized cars to market in the U.S., was also among the list of dubious candidates to have two vehicles receive a poor rating. For Hyundai, this was its compact car, the Accent, and small SUV, the Tucson, which both received a poor rating in the important small frontal impact test.

Unlike Nissan, Hyundai's sales have been stagnant of late. The South Korean automaker has witnessed its U.S. market share drop from 4.4% in Feb. 2013 to just 4.1% in Feb. 2014, and has only one vehicle, the Elantra, which also was its only top safety pick award, among the best-selling 20 vehicles for the past month. Between vast fuel-efficiency improvements from domestic automakers and safety issues like this, Hyundai will need to step up its game if it hopes to begin recapturing U.S. market share.

Toyota (NYSE:TM)
Toyota's story is certainly a tale of a two-sided coin. Because Toyota produces so many vehicles it's bound to have some winners and some duds. In the losing column, Toyota produced three vehicles that received a poor rating in the small frontal impact test. Those vehicles were its Prius c, Prius V, and its small SUV, the RAV4.

However, before I go raking Toyota over the coals, I should also mention that it also produced three top safety picks in the Highlander, Prius, and Camry, so it's not as if Toyota has thrown caution to the wind. In fact, Toyota managed a complete 180 with the Camry which had received poor ratings in the small front overlap crash test as recently as last year.

Still, these ratings have to somewhat concern Toyota which currently holds 13.3% of U.S. market share as of February and has seen its share slide from 13.9% over the trailing 12 months. Although the RAV4 remains among the 20 best-selling U.S. vehicles, it's the poor crash-test performance of the Prius c and Prius V that has me concerned. I'm left posing the question, "At what point might the benefit of improved gas mileage for a family be outweighed by poor crash data ratings?" That's a scary question if you're Toyota.

Kia
But, the honor for worst track record of all when it comes to IIHS crash safety ratings goes to South Korean auto manufacturer Kia Motors, which had four vehicles receive a poor crash test rating compared to just one, the Kia Optima, that was a top safety pick. Three of its vehicles, the Sportage, Forte, and Soul, all received poor small frontal impact ratings, while the Sedona minivan was the lone vehicle among all tested to receive a poor rating for its roof, which is measured by applying force to the roof and determined how much pressure relative to car weight is needed to crush the roof five inches.

Like its South Korean rival and partial owner Hyundai, Kia Motors has focused on bringing cost-conscious and somewhat fuel-efficient vehicles to the U.S. market. By appealing to consumers on design and price while keeping inside amenities to a minimum Kia has been able to keep its market share steady at 3.5%. The problem is that as the clear worst performer in the IIHS' safety tests it could see its sales slump, especially for family vehicles like the Sedona, if it doesn't make adequate changes soon.