2013 was a record year for the industry: For the first time, wind-generated power represented more than 4% of the U.S. electrical grid. The turbines may not be visible to the public, but they are certainly being installed at an impressive rate. During the last five years, wind power accounted for 30% of all new generating capacity. Can you thank your state for contributing to this milestone? Let's take a look.

Longhorns and Buckeyes
It's no secret that everything is bigger in Texas -- and wind is no exception. For states with the highest wind energy generation, the Lone Star state tops the list. Equivalent to powering over 3.3 million homes, Texas generated 35.9 million MWh of wind energy in 2013, and the state shows no signs of slowing down; it currently has more than 7,000 MW under construction -- that's more MW under construction than any other state's installed capacity.

When it comes to wind energy's share of state generation, though, Texas finds itself at number eight with only 8.3%. The top spot goes to Iowa, whose wind-generated energy accounted for 27.4%. Looking to further develop its wind power resources, Iowa currently has 1,050 MW under construction. Largely responsible for the wind assets under construction is Berkshire Hathaway utility MidAmerican Energy, which is buying over $1 billion worth of wind turbines from Siemens AG (OTC:SIEGY) in order to develop the projects.

Honorable mentions
Although it can't brag about being first,  South Dakota certainly deserves recognition. Coming in second place behind Iowa, its 1,681 MW of installed capacity allowed it to produce 26% of its energy from wind power.

California, coming in third, generated over 13 million MWh of wind-powered energy -- that's enough to power over 1.2 million homes. Traveling up the West Coast, Oregon, at number eight, generated about 7.5 million MWh in 2013, and, at number ten, Washington generated a little over 7 million MWh -- the equivalent of powering about 646,000 homes.

Haven't seen your state mentioned yet? Check below to see if it ranks among the top 20. 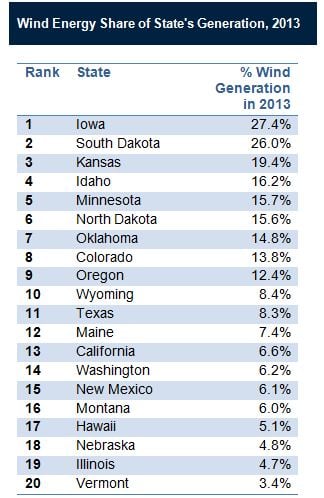 Where do we go from here?
Despite the unprecedented success the wind industry has seen in 2013, the future is still unclear, most notably due to the uncertainly regarding the Production Tax Credit and Investment Tax Credit. In a recent report, the American Wind Energy Association noted that:

"Total wind power capacity installations for 2013 were 1,084 MW. This represents a 92% reduction from the record-setting 13,131 MW installed during 2012 and this drop-off can be attributed to the late extension of the PTC and ITC."

Prior to the expiration of the tax credits, during the fourth quarter of 2013, more than 10,900 MW of wind power projects had begun construction and more than 12,000 MW are currently under construction in 20 states. As of now, the PTC and ITC have not been renewed, and if they remain expired it will surely cripple the development of future projects as it has in the past.

One company that is keeping a close eye on U.S. wind policy is turbine manufacturer Vestas (OTC:VWDRY). And, evidently, the company likes what it sees. After booking orders in 2013 for 900 turbines in the U.S. and Canadian markets, the company announced earlier this week that it will be hiring more than 850 workers for its Colorado production facility.

Also, keeping an eye on the U.S. market is Siemens, an industry leader in wind turbine manufacturing. Besides its major deal with MidAmerican Energy, Siemens is supplying turbines to Cape Wind -- the nation's first offshore wind farm, situated in Nantucket Sound. Most recently, Siemens won a contract from Minnesota Power to supply 64 turbines for the 205 MW Bison Wind Energy Center near New Salem, North Dakota.

Certainly, the wind industry had a record-breaking year in 2013. Whether it will continue in 2014 and beyond is still up in the air.