There's something to be said for a steady hand at the tiller. Few investors would be encouraged by a company that replaces CEOs like it's changing its coffee filters, so the consistency and experience of a long-tenured executive often look like a great positive when you're digging for long-term value. But does that translate to results on the bottom line and in the stock price? In fact, it often does -- and we've got the results to prove it.

There are a number of CEOs with decade-plus tenures at the same company, but in today's fast-moving corporate world, only a handful has made it to the elite 20-year club. A recent list compiled by Bloomberg ranked these rare leaders who had the support, inside and outside of the company, to hold onto the reins for more than 20 years. Let's look at the five longest-serving CEOs of public companies now and assess their performance during that time.

The wrong kind of CEO.
Source: Peter Kaminsky via Flickr.

5th place (tie): Leonard Schleifer and Laurence Fink, 26.1 years
Both Schleifer and Fink helped found their respective companies, Regeneron Pharmaceuticals (NASDAQ:REGN) and BlackRock (NYSE:BLK), in 1988. Regeneron went public in 1991 and BlackRock went public in 1999 after being spun off from Blackstone Group in 1994. Both men brought a wealth of experience to their positions -- Schleifer was a professor of neurology and neurobiology at Cornell before founding Regeneron, and Fink rose quickly through the ranks of First Boston to become a billion-dollar money manager before defecting to Blackstone.

Regeneron has posted gains of 1,460% since going public in 1991, but BlackRock's gains have trounced that with a total return of 2,510% since 1999. BlackRock has undoubtedly done better over the past 26 years, as it's the world's largest asset manager today, with power and influence on Wall Street rivaling that of the far more notorious Goldman Sachs. However, BlackRock certainly got a cushier starting point than Regeneron, as it held $17 billion in assets in 1992, the year in which it first adopted the BlackRock name.

3rd place: Harold Messmer Jr., 26.7 years
Messmer, the long-serving CEO of Robert Half International (NYSE:RHI), came onboard when the staffing agency was barely noticeable -- his biography on the site notes that the company's annual revenue was just $7 million in 1986, the year before he moved into the corner office. By the end of last year, that top line had swelled to $4.2 billion, and the company's share price had risen 3,460% from the earliest days of Messmer's stewardship: 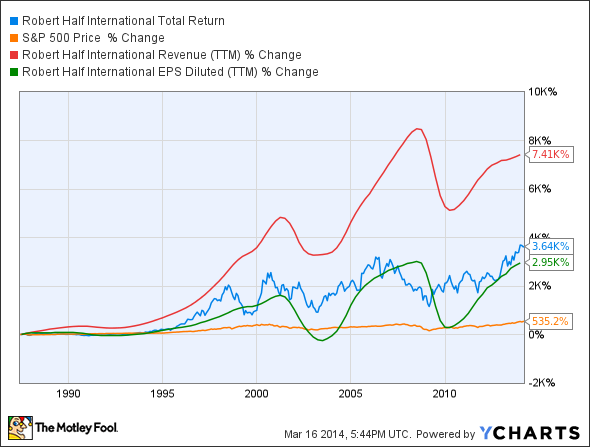 2nd place: Larry Ellison, 36.7 years
Oracle's (NYSE:ORCL) Ellison is the most senior CEO in the tech industry, and is a rock star in his own right -- the billionaire founder's exploits have included multiple yacht-race championships, billion-dollar spending sprees, attempted acquisitions of NBA teams, and the successful $500 million-plus acquisition of Hawaii's Lanai Island, which Ellison plans to turn into a hotspot destination for festivals, leadership retreats, and adventurous vacationers.

Since taking the company public in 1986, Ellison has built Oracle into the world's second-largest software company, in the process building his own personal net worth into the fifth largest in the world ... right behind that of the longest-serving CEO in America. Oracle's shares have grown enormously in value since going public, and few stocks on the market can claim better cumulative returns over the past three decades: 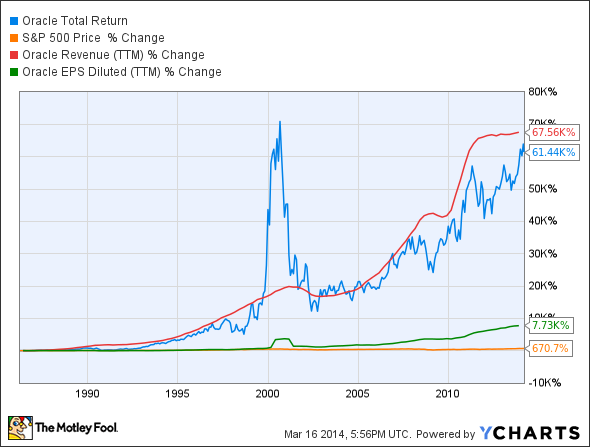 1st place: Warren Buffett, 44.1 years
The Oracle of Omaha and the world's fourth richest man also happens to have guided Berkshire Hathaway (NYSE:BRK.B) longer than any other CEO in the world save one -- Roger Penske of privately held Penske Corporation, who has a slim one-year lead over Buffett in time at the top. As the longest-tenured CEO of a public company, Buffett is legendary among value investors for good reason -- when he acquired majority control of Berkshire Hathaway in 1965, shares traded at $18 apiece. Today, each A-class share is worth $183,860, representing a total gain of 1 million percent, or an annual rate of return of 20.7% over 49 years.

Buffett took over Berkshire as CEO in 1970 after liquidating its earlier partnership structure and distributing shares to his former investment partners. Since then, his acquisitions have been home run after home run, with few clear flubs to be found. As an insurer, Berkshire has grown its float from $39 million in 1970 to more than $77 billion today. As an investment vehicle, Berkshire owns more than $117 billion in stock, which is a value roughly double what Buffett originally paid for the various holdings. Berkshire's four largest holdings paid out $1.4 billion in dividends last year.

Scroll down for the full list of CEOs with 20-plus years at the helm. As you can see, nearly all of our long-serving CEOs have been very good for shareholders. There's more to corporate success than executive stability, of course, but this list shows that there aren't many instances where a revolving door in the corner office -- or even just a shakeup every few years -- becomes the better option.

Sources: Bloomberg and YCharts.
Stock growth is calculated from IPO or from beginning of CEO tenure, whichever comes later.
*Note: Annualized growth rate calculated based on CEO tenure and may not equal actual growth rate.