RadioShack (NYSE: RSH) has one major problem that will be difficult to fix: it lacks differentiation. If consumers want wireless and data plans, they can go to wireless carriers directly. If consumers want electronic devices, they can go to Best Buy (NYSE:BBY), Wal-Mart Stores, or Amazon.com (NASDAQ:AMZN), among others. While industry trends are one reason to use caution with RadioShack, numbers are an even bigger reason.

A concerning trend
RadioShack recently announced that it will close 1,100 stores, which is 600 more stores than it had planned on closing. This indicates that RadioShack might be facing more headwinds than the average investor knows. Only those on the inside know the answers, but we can look at some telling numbers.

If that's not enough information to put a little worry into you, consider a visual. The five-year chart below shows RadioShack's efficiency faltering over the past year: 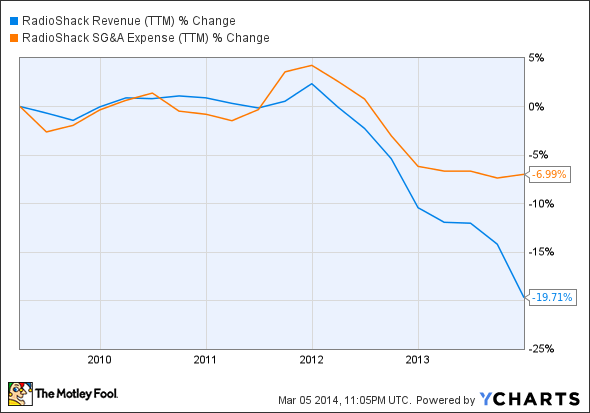 A retailer cannot turn itself around in this consumer environment unless it offers differentiation and has a leg up on its peers in one way or another. It's difficult to see how RadioShack fits into this category.

Fierce competition
Unfortunately for RadioShack, one of its competitors is Amazon. If you're not a believer in Amazon being a big player in consumer technology, then just visit Amazon.com and see what happens on the left side of the page. A dropdown menu will appear, comprised of the following listings: MP3s, Cloud Player, Amazon Cloud Drive, Kindle Books, Kindle E-Readers, Kindle Fire Tablets, Appstore for Android, and Digital Games/Software. It's evident that Amazon wants to sell technological devices, and this is just a small sampling.

As far as Best Buy goes, it at least has a chance at a turnaround. Unlike RadioShack, it changed its strategy in time to have that chance. What was formerly a big-box retailer is now a retailer focused on space optimization. In other words, it wants to maximize the square footage in its stores by selling higher-margin products than it did in the past.

Best Buy is also now featuring Apple, Google, Samsung, and Windows products. This allows consumers to come in and try devices before purchasing them, which could lead to increased traffic in the future. That said, it's not going to be easy. If any of these bigger players were to pull out of Best Buy, it would be a devastating hit. This leads to a lack of leverage for Best Buy.

Getting back to RadioShack, it blamed its weak fourth-quarter performance on weak traffic for the holiday season, being very promotional, a soft mobile marketplace, and operational issues. All of these factors are difficult to fix.

The Business Journals recently conducted a poll, asking consumers if they thought RadioShack closing 1,100 stores would be enough for the retailer to survive. At the time of this writing, there were only 123 votes, but that's better than nothing; these results give us an idea of how consumers perceive the brand. The poll's results: 74% of respondents don't think RadioShack will be capable of a turnaround. Only 15% of respondents believe RadioShack can turn itself around. And 11% weren't sure.

The Foolish takeaway
Is it possible that RadioShack turns itself around? Yes. However, given the information above, it's not a likely scenario. Therefore, you might want to consider steering clear of RadioShack from an investing standpoint. Best Buy should have a better chance at a turnaround. That said, Amazon is more in-line with industry trends than both of them.