In response to this news, Foolish investors are probably wondering whether an investment in the discount retailer still makes sense. Surprisingly, the big picture suggests that now may be an interesting time to buy.

Dollar General had nice but mixed results!
For the quarter, Dollar General reported revenue of approximately $4.5 billion, a 6% gain compared to the $4.2 billion reported in the year-ago quarter. But results fell short of the $4.6 billion revenue forecast. According to management, the revenue shortfall was due to poor weather, which pressured the company's comparable-store sales growth to only 1.3%.

Despite seeing lackluster top-line growth, the company was capable of meeting bottom-line estimates. In terms of profits, Dollar General reported earnings per share of $1.01. This is a 4% jump compared to the $0.97 the business reported in the year-ago quarter and was mostly due to a 3% reduction in the number of shares outstanding over the past year. 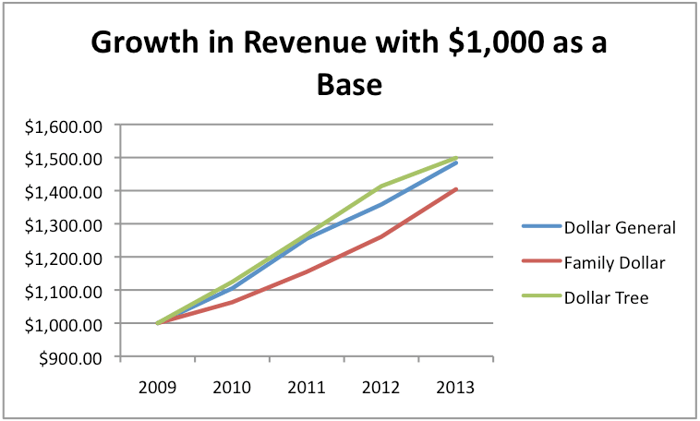 But is Dollar General the king of discounts?
Although Mr. Market wasn't very receptive to the company's performance this past quarter, Dollar General still posted attractive growth and managed to maintain a reasonable profit increase. This represents an extension of the company's track record over the past few years. But is the company really all that great, or is the success of its dollar-store setup a dime a dozen?

Over the past five years, Dollar General has seen its revenue rise an impressive 48% from $11.8 billion to $17.5 billion. This has been due, in part, to rising comparable-store sales, but it has also been a function of more store locations. During its 2013 fiscal year alone, the business opened 650 stores, bringing its store count to 11,132.

Family Dollar Stores (NYSE:FDO.DL) has seen similar, though less stellar, success. Over the same period, the business enjoyed a 40% jump in revenue from $7.4 billion to $10.4 billion. As a smaller entity, Family Dollar provides investors with attractive upside potential. But the company has yet to demonstrate that it can grow at the pace of its larger rival.

Where Family Dollar has fallen short, Dollar Tree Stores (NASDAQ:DLTR) has delivered. From 2009 through 2013, the company saw its revenue pop up 51% from $5.2 billion to $7.8 billion. While this isn't significantly greater than Dollar General's growth rate, it does show that management has been able to capitalize on its smaller size. 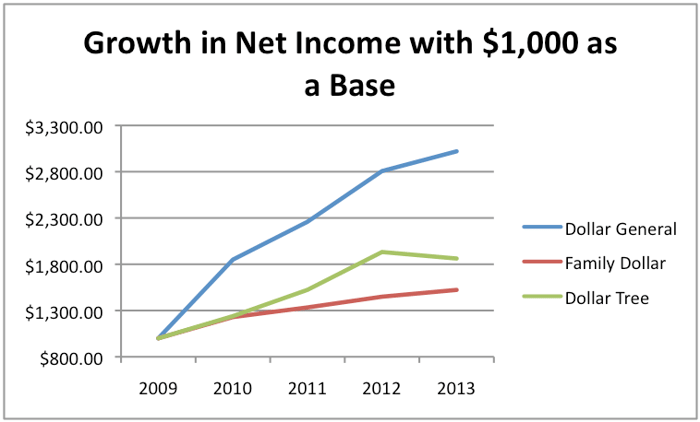 In terms of revenue growth, Dollar General sits in the middle of its peers. But when you look at profitability, the company is vastly superior to its rivals. From 2009 through 2013, the company saw its bottom line expand 202% from $339.4 million to $1 billion.

Now, in all fairness, there is a big difference between the three businesses that helps to explain Dollar General's standout profit performance. Over the past five years, the company has paid off around 19% of its outstanding debt, which has helped decrease annual interest expenses from $345.6 million to $89 million.

Stripping away interest and accounting for taxes would reveal that the company's net income rose only 96% during this time horizon. While this is still better than the company's peers, it's nowhere near as wide of a difference as was shown previously.

Foolish takeaway
Based on the data provided, it looks as though Dollar General had a rough but respectable quarter. Yes, the company did see its revenue growth slump, and its profit increase was largely driven by share buybacks. But the long-term performance of the business shows that it has been a real winner.

In terms of revenue growth, the company has done average compared to its peers. But the increase in profitability has offset this, even after considering the effects of its large interest payments. Moving forward, it's hard to tell if management can continue to push the company in the direction of success. But Dollar General is the largest and most efficient enterprise among its peers, and it's impossible to argue that the company doesn't deserve a deeper look before discarding.