A drought-ravaged Brazil might have to turn to energy rationing.

In just three months, Brazil will kick off the 2014 FIFA World Cup. The soccer tournament is one of the most anticipated international events of all time, but Brazil might be having second thoughts about its sponsorship. Here's why.

Drying out
The glitz and the glamour of the World Cup create a logistical nightmare -- and the onerous tournament organization just got even more awful for Brazil. The country just recorded the second-driest January in 80 years, something that means more than yellow lawns for this South American country.

Brazil relies on hydroelectric power for a whopping 80% of all its electricity generation. Hydro pushed 428,333 GWh to Brazilian businesses and homes in 2011 (the most recent available data). Its secondary source, biofuels, clocked in at 32,235 Gwh, equivalent to just 6% of total production. 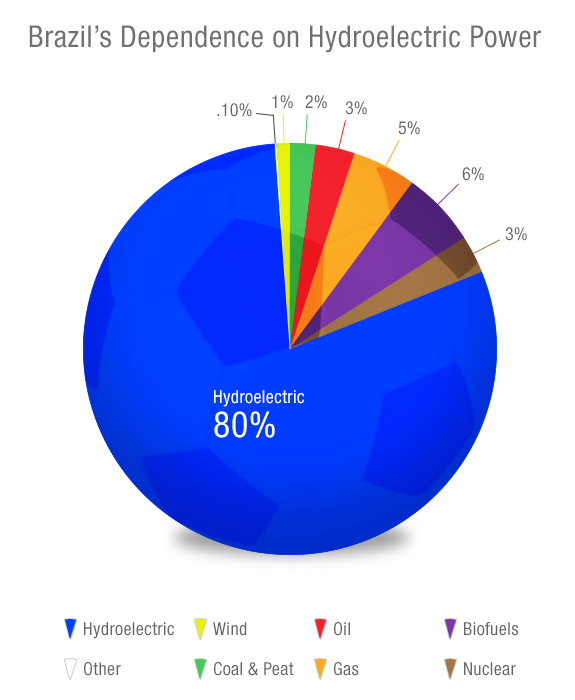 For those who've analyzed Brazil's power production in the past, this news should come as no surprise. Increasingly erratic weather has made hydroelectric power riskier than ever before. Once heralded as a steady, environmentally friendly renewable energy, hydropower assets have made energy companies increasingly leery.

Duke Energy Corporation ( DUK -0.32% ) has been in Brazil since 1999, when it acquired Paranapanema Electricity Generation Company. While the subsidiary currently creates a massive 2.3% of all Brazil electricity, it relies on just 10 plants spread along only two rivers to generate 2,274 MW.

International utility The AES Corporation ( AES 0.24% ) also has hydro operations in Brazil. While its two distribution businesses will be less affected by dry weather, its nine hydroelectric power plants and three smaller projects are all under threat. With 2,658 MW of installed capacity, The AES Corporation's piece of Brazil's energy pie is just as big as Duke Energy Corporation's. In its last earnings report, The AES Corporation noted that its current reservoir levels stand at 39% -- well below the 68% historical average.

Expensive alternatives
Brazil's hydro addiction is hitting it hard. As hydropower doesn't make its mark, the country may have to rely on expensive liquefied natural gas imports to keep its cities up and running.

Electricity demands leading up to and during the World Cup are enormous. The country is spending $14 billion on infrastructure projects -- equivalent to 15,000 new miles of roads. It expects 600,000 foreign tourists and 3.1 million locals to attend games, spending a total of $2.1 billion in-country.

To add insult to injury, Brazilians are currently paying for untapped wind energy from 48 farms. With capacity to power 3 million homes, construction delays have kept these wind farms disconnected from local power grids. Wind power association Abeeolica estimates that this inefficiency is costing Brazilians around $230 million, not to mention the $1.3 billion spent on more expensive fossil fuel generation.

Keep the lights on
On Feb. 4, 6 million people across 11 states were plunged into darkness as supply simply couldn't keep up with demand. If Brazil has to cough up cash for expensive LNG to keep the World Cup whirling, it'll pay a pretty penny. But if the country can't even keep its lights on, it'll be a dark and dismal World Cup, indeed.