SandRidge Energy (NYSE: SD) has undergone a lot of changes over the past year. At its recent investor and analyst meeting the company spent several hours going into the details of its refined business plan. The company's plan detailed the six reasons why it now believes it's in a much better position to create value for investors. Let's take a quick overview of these six areas.

SandRidge Energy has spent a good part of the last year focusing its strategy solely on what it does best and that's develop its acreage in the Midcontinent. This is yielding really strong results as the company is drilling more wells for less money. For example, last year the company grew production 35% despite a 30% reduction in its rig count. In addition to that the company is improving the results of the wells it drills as it has seen an 8% improvement to its first year production. Another example of how focus is paying off is in its new lower cost saltwater disposal system, which is detailed in the following slide. 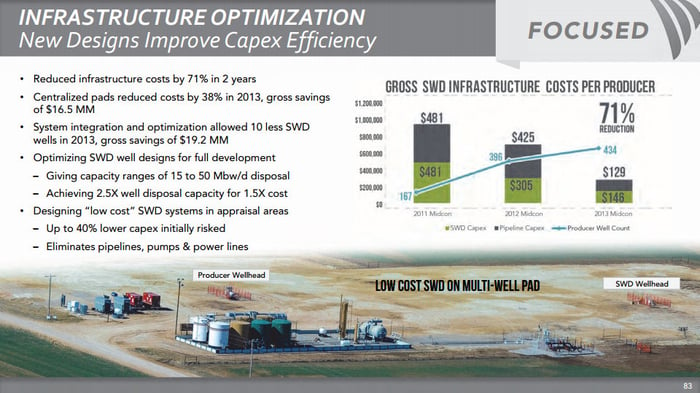 Competitive advantage
The focus on the Midcontinent has become a very strong competitive advantage for the company. SandRidge Energy was early in developing the saltwater disposal and electrical systems that are critical for developing the water filled and rural Mississippian Lime formation of Kansas and Oklahoma. The company's system is unmatched as it spent $610 million to drill 153 disposal wells and lay 865 miles of produced water pipelines as well as 781 miles of power lines and 5 operated substations. This advantage enables SandRidge Energy to make strong returns from the area while well-funded peers like Royal Dutch Shell (NYSE:RDS.A) (NYSE:RDS.B) cannot and are forced to give up developing the play.

Actionable growth
SandRidge Energy has a very strong multi-year drilling program in place. Over the next three years the company expects to grow production by 20%-25% annually even with keeping its capital spending static. That growth will come at even better internal rates of return as the company expects to continue improving its costs. This has the company's returns improving from the current 59% rate to 79% at current commodity prices. One of the reasons why Royal Dutch Shell doesn't have a future in the Mississippian is because it simply couldn't get its returns as high as those enjoyed by SandRidge.

Innovation
One of the reasons SandRidge Energy is able to get its costs down is because it's focused on using innovation to improve returns and add to its growth potential. This has included its appraisal program which recently added another 100,000 acres to its focused drilling program. In addition to that the company has added options to its playbook that enables it to develop its acreage in the most capital efficient manner. These options include three prototype projects that will enable it to drill the most effective wells. These could enable the company to tap 34% more of a reservoir section with 26% less capital as the following slide shows. 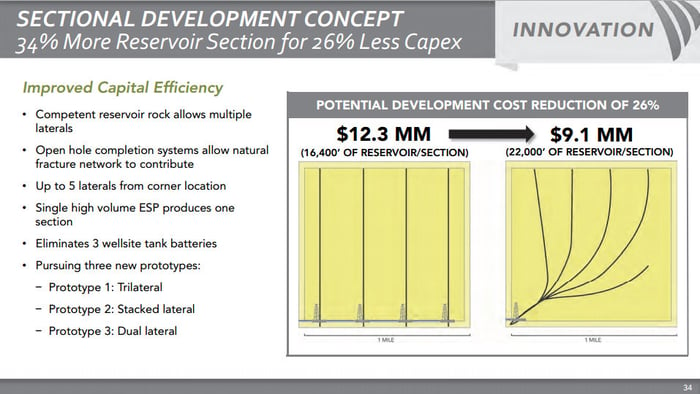 Upsides
SandRidge Energy has compelling upside potential outside of its core focus area. For example, the company has a number of additional layers above and below the Mississippian Lime that hold producible oil and gas. This include the Marmaton, Chester and Woodford, which are under much of the company's acreage. Initial well results from either SandRidge or the industry are promising that these new areas offer future growth potential.

Funded
For years the biggest worry for investors was how SandRidge Energy was going to pay for its growth potential. The combination of asset sales, growing cash flow and improved results now have the company fully funded. In addition to that there is funding upside from a potential monetization of the saltwater disposal system. With the overhang of liquidity concerns removed, SandRidge Energy can focus on creating the most value from its asset base.

Investor takeaway
SandRidge Energy has made some big changes over the past few years. These changes have led to a refined business model that has the company focused on value creating growth for its investors. As the company delivers on this new plan its shares should head much higher.

Does this make SandRidge Energy our top growth stock of 2014?