Plug Power is up more than threefold so far this year, but has it come too far, too fast?

Plug Power's (PLUG -2.85%) stock has been on an incredible, if volatile, run in 2014 and investors have to be wondering what in the world is going on at this point. 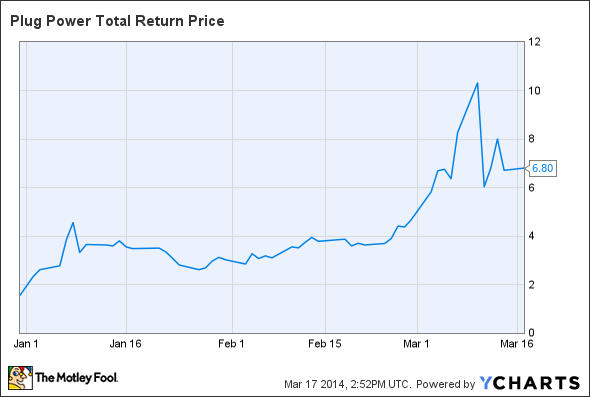 The market is realizing that there's a lot of potential for fuel cells in materials handling and other applications, but is the rapid rise of this stock reason to be concerned or just the beginning for this company? Let's take a look at the numbers to try to bring some sense to the stock.

What is a GenDrive system worth?
What has the market extremely excited about Plug Power in 2014 is an order of 1,738 GenDrive fuel cell units, infrastructure, hydrogen supply, and services contract from Wal-Mart (WMT -1.33%). This will supply six Wal-Mart distribution centers and investors are hoping it's just the tip of the iceberg for Plug Power's large site orders.

We don't know right now what the order details are besides the number of GenDrive systems. So, we'll have to use that as a proxy for the future revenue from this order to figure out its value.

In the third quarter of 2013, Plug Power sold 155 fuel cell systems for $4.2 million and for the first nine months of the year sales were $17.3 million for 639 systems. Therefore, we can reasonably assume that the average sale price is just above $27,000, not including fuel and other services.

So, Wal-Mart's order of 1,738 units is worth somewhere around $47 million, plus services. That's in the ballpark of the $60 million year-to-date order figure given when earnings were reported last week. Let's remember that Plug Power's hydrogen fuel cells are replacing electric batteries, so the hydrogen cost must be lower than the electricity and labor costs it is offsetting or Wal-Mart wouldn't make the switch. A ballpark of $5 million in annual service and fuel revenue is probably high but in the right ballpark, so let's use that as recurring revenue even though the figures now exceed the order figure given for 2014.

If my estimates are correct, the Wal-Mart Plug deal will generate about $47 million from fuel cell sales over the next two years and somewhere around $5 million in other services. On average, that's about $28.5 million in sales annually.

Now, if we assume a 20% gross margin, which is generous considering margins are currently negative, I could see $5.7 million in gross margin annually for two years from this order.

What's remarkable is that the company is worth $373.6 million more than it was when this order was received. Sure, it's a big order, but you can see that the market is expecting an awful lot from Plug Power.

High expectations on the market
The concern I have with buying Plug Power today is that all of the potential growth is already priced in. It would need to take in 10 orders the size of Wal-Mart's just to come close to living up to its current valuation and that's a tall order.

Very few warehouses have the size and scale of Wal-Mart and it would be hard to justify a multimillion-dollar switchover from traditional forklifts to hydrogen power. As someone whose job was once to order forklifts for a manufacturing plant with more than $1 billion in sales and more than 100 forklifts, I know that the numbers simply wouldn't have worked on that smaller scale. Electricity is cheap and readily available and the time and cost saved by not having to change out a battery or have a battery charging would require massive scale to justify replacing.

With that said, there are well more than 10 companies that have distribution centers on the scale of Wal-Mart's. Plug Power could certainly win more big distribution sites like that and continue to grow into new markets as well.

FedEx is testing Plug Power's fuel cells as a backup power for electric vehicles. Long term, this could be a viable business if delivery services go electric and don't want to be stranded on the side of the road. But it's also a highly competitive business and there's no guarantee that potential sales will turn into reality.

Foolish bottom line
The market has set lofty expectations for Plug Power, as indicated by a $694 million market cap after just $26.6 million in revenue last year. I'm not saying the company couldn't live up to those expectations and management has already said it hopes to hit $150 million in orders this year, more than quadrupling a year ago. But by buying today, you only have upside if the company exceeds the already-high expectations.

That's a tall order and it's such a lofty price that I'll stay out of the stock anywhere near its current valuation. The downside risk for stocks like this is much higher than the upside potential and, until I see Plug Power starting to post a profit and win more than just a one-off order here and there, I'll stay skeptical.

Travis Hoium has no position in any stocks mentioned, and neither does The Motley Fool. We Fools may not all hold the same opinions, but we all believe that considering a diverse range of insights makes us better investors. The Motley Fool has a disclosure policy.