Skechers' great performance and other strategic efforts should make you believe in this company.

U.S. retail sales inched up 0.2% in December. This increase followed a 0.4% jump in November, resulting in retailers' merriment. Although this was driven by the highly promotional environment and deep discounts, this shows that consumers are willing to open their wallets. In fact, there are some standout companies that have performed much better than expected, making the most of increased consumer spending.

Great performance indeed
High demand for products drove revenue up to $450.7 million, an increase of 14% over last year's quarter. Demand for winter wear, such as boots, surged mainly due to a colder holiday season. On the other hand, warm weather in the West led to higher sports footwear sales.

All of Skechers' segments did well, which led to staggering growth in the top line. Both its wholesale and retail businesses grew substantially as the shoe retailer launched new products. Revenue from the retail segment increased 18.6% over last year; the company opened 20 new stores. However, store additions were not the only reason for the performance. Same-store sales grew 12.8%, which boosted total revenue.

Additionally, the footwear retailer's e-commerce operations grew by 9% due to stronger marketing efforts. The company's earnings more than tripled to $0.28 per share from $0.08 per share a year-ago. Skechers' efficient inventory management and cost-savings efforts paid off, resulting in a margin expansion of 190 basis points.

Strong recovery from the past
Although the shoe retailer's performance has been remarkable, this isn't the case when we look at its stock price. Over the last five years, Skechers did not perform as well as peer Crocs ( CROX -2.27% ), as evidenced by returns. However, it did manage to outperform Nike ( NKE 0.14% ) during the same period. 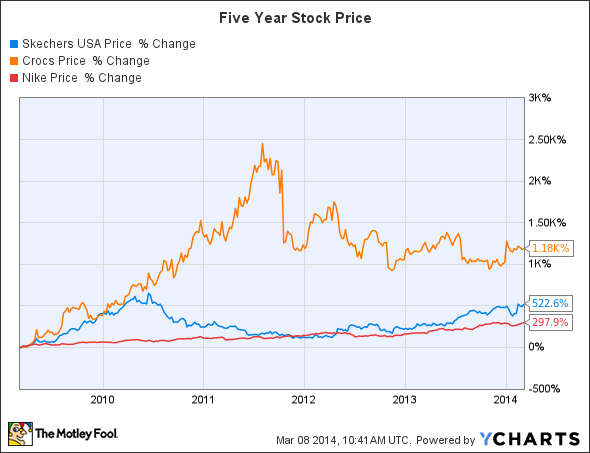 Crocs' stock price grew 1,180% over the last five years, much higher than Skechers (522.6%) and Nike (297.9%). This is mainly because Crocs' stylish and colorful footwear attracted customer in hordes. Moreover, its products were comfortable, which lured people to its stores.

Skechers, on the other hand, lacked innovation, which is why it lost customers' interest, especially in the domestic market. Also, its inability to manage rising input costs added to Skechers' woes. However, with increased efforts to grow its geographical presence and new product developments, Skechers outpaced its peers, as shown in the chart below: 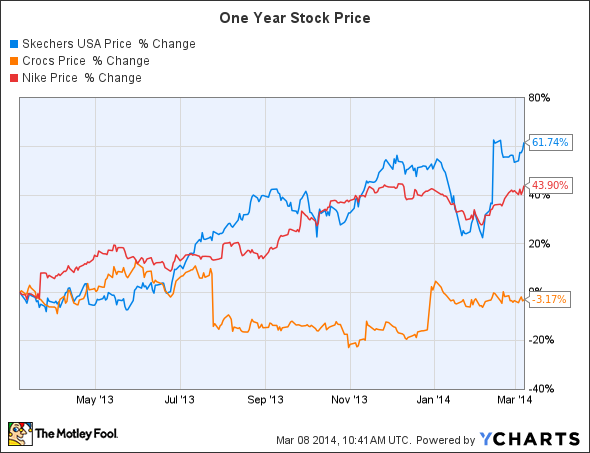 Skechers' stock price has appreciated by 61.7% over the last year, whereas Crocs shares have fallen 3.2%. Crocs' performance has been deteriorating since it is unable to attract many customers. In fact, in Crocs recently reported fourth-quarter, revenue increased by only 1.6% since demand for its colorful clogs declined. Same-store sales fell 4%, forcing the retailer to move into more fashionable footwear.

Nike remains in second position with returns of 43.9%. Nonetheless, Nike's efforts have been quite fruitful; the company experienced a revenue increase of 8% to $6.4 billion. The company's products resonate with customers because of Nike's focus on comfort and innovation.

As pointed out previously, Nike's products such as Nike+ FuelBand and Flyknit technology have not only attracted more customers but also led to expanding margins. Moreover, the company has been marketing its products well by promoting them at various sports events such as the Olympics and the World Cup.

Way to go
Therefore, it is clear that Skechers has recovered over the years and seems to be a strong player. It also has some good reasons to be hopeful. For example, it plans to open a number of new stores in the future in order to grow its top line. For 2014, the footwear company expects to add 60 to 70 new stores, which will enhance its presence.

Skechers also plans to expand its footprint internationally, where demand for its products has been attractive. Lastly, it plans to continue to innovate and launch new products, which will provide more reasons for customers to enter its stores.

Bottom line
After having a difficult time, Skechers seems to be making a great comeback. Its diversified product portfolio, which includes items catering to needs ranging from winter wear to sportswear, has been luring customers in. Moreover, the marketing tools it has chosen to use have been helpful. Its ability to outpace other players and its plans for a bright future make me believe in this company. Investors should not ignore this growing retailer.