The craft beer segment saw double digit growth during 2013, a year where the overall beer market shrunk. Craft Brew Alliance (CBA) (NASDAQ:BREW) took advantage of the growing popularity of craft beer to improve its top line. However, the company's EPS dropped driven by its struggling gross margin. CBA has committed to focusing on growing the top line while expanding gross margin to boost earnings and compete against other beer powerhouses like the Boston Beer Company (NYSE:SAM) and Anheuser-Busch (NYSE:BUD).

Getting gross
For the year, CBA's gross margin fell 150 basis points to 28.1%. This was driven by reductions in the company's pub and beer businesses of 240 and 140 basis points, respectively. Low capacity utilization and growing pains in the supply chain hurt the beer business during the company's first quarter of 2013, while renovations of the Woodinville brewery pub spurred extra reopening costs.

After 2013, CBA made it a goal to grow its gross margin by 500 to 700 basis points in three to five years. The company plans to do this through SKU (stock keeping unit) rationalization and expanding its brewery footprint.

SKU rationalization is an analytical process that helps a retailer determine if it should keep an item in its merchandise assortment. The company has already eliminated 25% of its SKUs for 2014. According to Scott Mennen, CBA's Vice President of Brewery Operations, "The SKU rationalization process will improve the focus of our sale and operating groups while reducing complexity and reducing our cost structure." This should translate to higher margins for the remaining products.

In February, CBA announced a partnership with Blues City Brewery. Starting production in late spring, the Memphis-based brewer will be used to brew over a hundred thousand barrels of CBA beer. This partnership will increase the company's footprint by creating a brewing structure in the east and west that will improve CBA's cost structure. It will also increase flexibility in its brewing operations and allow consumers to get fresher beer.

If CBA can execute these strategies I think the company can reach its goal of gross margin improvement, but it will still be much lower than competitors Boston Beer and Busch.

A long way to go
The chart below shows how much CBA has to grow its gross margin to keep up Boston Beer and Busch. 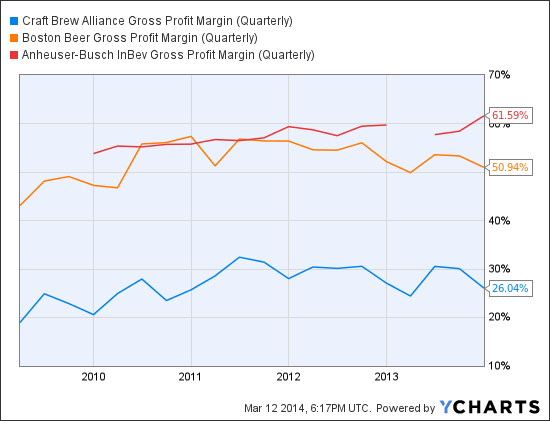 Boston Beer's gross margin fell from 54% to 52% during 2013 due to increases in ingredient costs, product mix, and brewery processing costs. Like CBA, Boston Beer experienced an increase in demand for its products and was forced to increase production at a higher cost. Overall, not the worst problem to have but one that shows that Boston Beer is still experiencing growing pains. The company has increased its packaging and shipping capabilities to adjust, but still expects gross margin to be between 51% and 53% for 2014.

Anheuser-Busch has the highest gross margin, 59% for 2013, but prefers to look at its EBITDA margin when relaying information to investors. That margin increased 179 basis points during 2013 to 40%. This is high compared to CBA and Boston Beer, which have current EBITDA margins of roughly 6.67% and 19%, respectively. Busch has a larger global reach than CBA and Boston Beer with most of its EBITDA growth came from international expansion in Brazil, Mexico, and Latin America South.

Sticking with craft
CBA has smaller margins that it will focus on growing while continuing to improve its topline growth and product branding. The rise of craft beer's popularity could lead to brands like Kona and Red Hook stealing market share from domestic beers like Budweiser and Bud Light, which each lost 15 basis points of market share in 2013. CBA is going through some growing pains, but once the company expands its production capacity it could turn into a strong long-term investment.