Please ensure Javascript is enabled for purposes of website accessibility
Free Article Join Over 1 Million Premium Members And Get More In-Depth Stock Guidance and Research
By Patrick Morris - Mar 17, 2014 at 9:30AM

General Electric recently disclosed it would be preparing the IPO of its North American Retail Banking business, and it has a number of things making it worthy of investment consideration.

Looking for a new company to invest in? A recently announced IPO is one you might want to consider.

Last week, General Electric ( GE 0.75% ) officially announced it has taken the first steps to spin off its retail financing business in North America, and a quick glance through the documentation reveals newly named Synchrony Financial should be on your investment radar.

Attractive businesses
Synchrony Financial highlights in its SEC filing it is "one of the premier consumer financial services companies in the United States," and it runs a compelling business model. It has three primarily business operations, Retail Card, Payment Solutions, and CareCredit, which all have attractive considerations.

Retail Card is simply a partnership with retailers to provide the underlying functionality of their branded credit cards. That Amazon (NASDAQ: AMZN) Store Card that allows for special financing offers on major purchases? It's provided by GE Capital Retail Bank (soon to be Synchrony). It has had a relationship with Amazon for six years, and it also partners with other well-known retailers, including Lowe's, Sam's Club, and Wal-Mart, which operate across a number of diverse industries. In total it partners with 24 retailers, and has issued a staggering 50.8 million cards.

In addition, it also operates a Payments Solutions business which provides promotional financing for big-ticket purchases by consumers. When Ashley HomeStores offers customers the opportunity to finance the purchase of a new bedroom set with no-interest for the next five years, it is done through GE. It also operates in seven other markets including automotive, electronics, jewelry, and even things like motorcycles, ATVs, plus doors and windows or HVAC units for homes.

You may have a Synchrony card even now.

Finally, its CareCredit operations provides financing, across the burgeoning health care industry. It highlights it only provides financing for "elective," procedures -- those that aren't essential -- and includes dental, veterinary, vision, and others. In total, it has a wealth of providers and locations it operates with, as at the end of the year it 149,000 partners with a total of 177,000 locations.

In total, the retail card business has the largest share of revenue, but it has a relatively even dispersion: 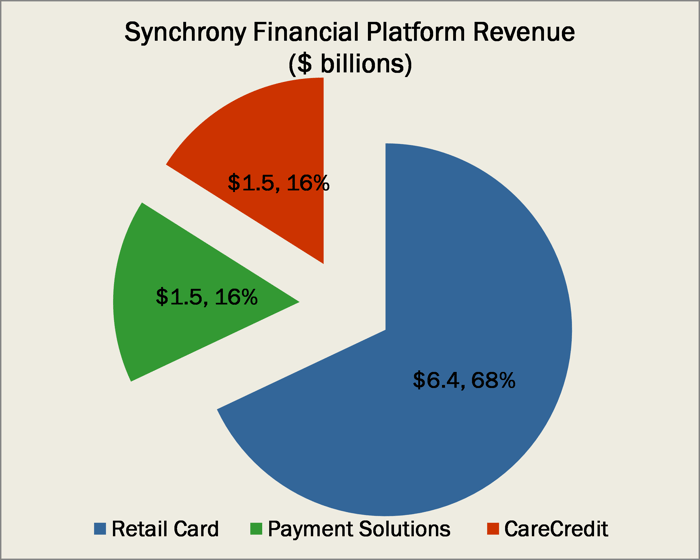 Solid returns
In addition to its strong businesses, there's also no denying the company delivers remarkable financial performance as well.

Although its earnings dipped slightly in 2013 as a result of higher payments made to its partners and a greater provision for loan losses, it has still delivered attractive profitability results. Last year, it delivered a staggering return on assets and equity of 3.5% and 38.6%, respectively, and an efficiency ratio -- which measures the cost of each dollar of revenue -- at 28.6%.

The ability to deliver strong returns plus a growth in earnings is always something to pique the interest of investors.

Compelling prospects
Lastly, Synchrony Financial could have ample room for growth ahead of it. The company partners with growing firms in growing industries -- whether they be retailers like Amazon or firms in the health care industry. In addition, there is always room to increase the use of its cards across its partners, and add new ones.

Throw in the fact it acquired $6.4 billion worth of deposits from MetLife and it is looking to expand its direct banking operations and expand its efforts with small and mid-sized business, there is certainly opportunity to expand.

Without ever seeing the valuation at which it will IPO at, it's far too early to make a final investment decision, but the first glance reveals it is definitely one to be considered.