A lot of hopes are being pinned on the non-residential construction market in 2014, and major companies such as Johnson Controls, (NYSE:JCI) and Caterpillar Inc. (NYSE:CAT) are hoping for broad-based strength in the sector. In this regard, it's fascinating to look at a company like NCI Building Systems (NYSE:CNR) and see what its outlook means for the sector.

It's interesting to contrast Johnson Controls and Caterpillar, because the former gave a cautious outlook for its heating, ventilation and air conditioning, or HVAC, markets in 2014, while the latter predicted its construction machinery sales would rise 5%. Johnson Controls may be conservative with its guidance, because current conditions are affected by the weather, and because HVAC solutions are relatively late stage in a construction project.In other words demand tends to kick in later in the cycle. However, Caterpillar's construction machinery is likely to have a longer-cycle demand and be utilized more in early stage work (excavation, earth moving, and the like). Perhaps this explains the difference in outlook?

Turning to NCI Building Systems, its results and commentary matter due to its focus on non-residential construction in the U.S. A breakout of its segment earnings before interest, tax, and depreciation, or EBITDA, reveals how it makes money, and how cyclical its engineered building systems segment is. 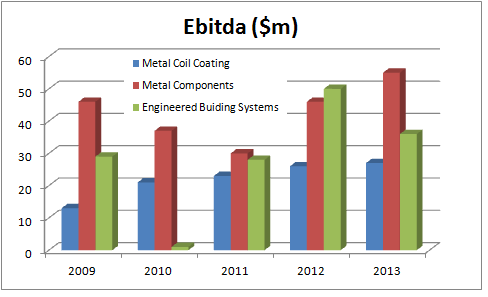 As an indication of the relative cyclicality of each of the segments, the percentage revenue decline from peak to trough (2008-2010) during the last recession was 33%, 45%, and 55% in the order of segments listed in the chart. Therefore, if you want to gauge the strength of the recovery then the engineered building systems (a 55% peak-to-trough decline) segment is the place to start.

Given, that NCI Building Systems claims to have a 25% market share within this segment, it's fair to say that its outlook is representative of the industry. Interestingly, management cited particular strength in warehousing and storage, while referencing declining industrial vacancy rates as a cause for optimism going forward. An indication, that these sectors might outperform retail based construction in 2014.

Whether the weather
From a company-specific perspective, NCI Building Systems joined Caterpillar in making more positive noises on the industry outlook. In addition, industry conditions are looking better with the Federal Reserve's "Senior Loan Officer Survey" indicating stronger demand for commercial real estate loans, and loosening lending standards. However, the extreme winter weather has complicated matters. For example, the widely followed Architectural Billings Index from the American Institute of Architects tailed off in the winter after entering October in good shape. 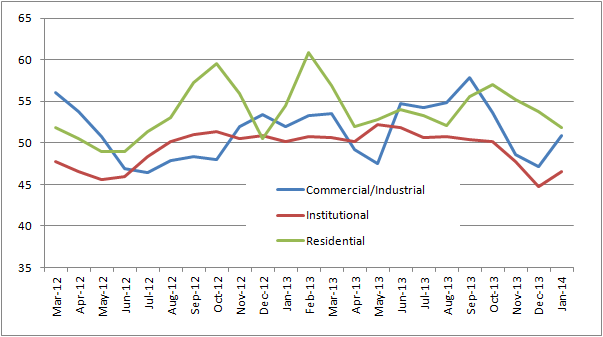 Unsurprisingly, it bounced back in January, so there is an argument for saying that companies like Johnson Controls are giving guidance that is conservative, because it's partly based on unusual winter conditions.

Indeed, NCI Building Systems saw severe disruptions from the weather in its first quarter, and they look likely to extend into its second quarter which ends in April. However, in an indication that underlying conditions are better, NCI's management expects second-quarter margins to be similar to last year's, despite the weather disruptions. The overall weather effect has helped reduce market expectations for its full-year 2014 EPS expectations to $0.28 from $0.40 previously. However, earnings are expected to bounce back strongly in the year to October 2015, with analysts forecasting $0.70 in EPS.

On its current price of $16.60, NCI Building systems is on a 2015 P/E ratio of nearly 24 times earnings. It's hardly cheap, but those earnings estimates could be revised upwards if the economy improves.

The bottom line
Despite the weather affecting its first-half performance, the indications from NCI Building Systems's results are that the U.S. non-residential market is set to improve in 2014. Investors in the sector should remain cautiously optimistic and start to look at companies like Johnson Controls and Caterpillar for signs of strengthening.