Fears of a permanent copper decline focus on one country: China. China consumes 40% of the world's copper. If China's growth rate fell to U.S. levels, copper would be in for years of pain. In many ways these fears are overblown. Simple per capita GDP growth rates point to a strong long-term market for copper miners like Southern Copper (NYSE:SCCO) and Freeport-McMoRan Copper & Gold (NYSE:FCX). 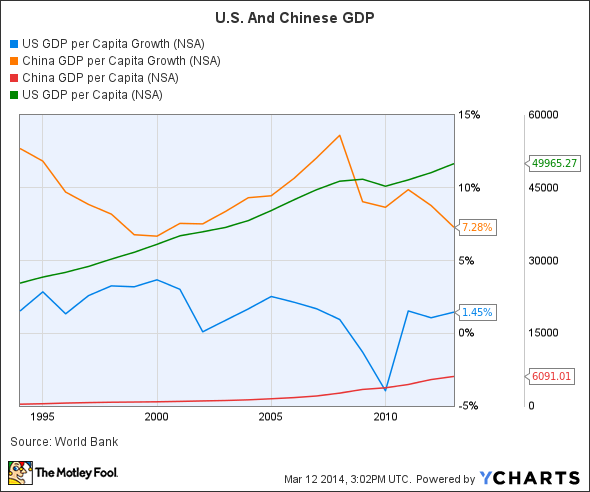 US GDP per Capita Growth data by YCharts

What do all these numbers mean?
China still has a long way to go. It will need to grow for a number decades before its per capita GDP is comparable to America's. Understanding China's capitalist economy and communist political system is difficult, but it is not wise to criticize a dragon just because it doesn't hunt like an eagle. China has been willing to go against the grain in some key areas, and now it is the world's second-biggest economy.

Long term, copper miners are buys
Copper miners are a critical part of China's economic and technological development. Established copper miners with low-cost mines and healthy balance sheets are strong investments. Southern Copper has a number of operating mines in Mexico and Peru. Thanks to its established asset base it enjoys a profit margin of 27.3% and a gross margin of 50.9%. When accounting for Southern Copper's by-product production of metals like molybdenum, its 2013 operating cash cost per pound of copper was just $1.

Freeport-McMoRan runs a more diversified operation with mining and oil and gas assets. In 2013 its unit net cash operating cost per pound of copper was just $1.49. High margins and diversification will help provide stability during the next downturn.

Freeport-McMoRan is dealing with political challenges at its Grasberg mine in Indonesia, but the mine's long-term outlook is positive. While Grasberg's production may be cut until more domestic smelting capacity can be built, Freeport-McMoRan is sufficiently diversified so that it should have no problem servicing its debt.

Be selective, not greedy
Newmont Mining (NYSE:NEM) is another copper producer, but its gold operations and lack of diversification hold it back. It posted a loss per share of $4.94 in 2013 thanks in large part to Indonesian political issues pushing up costs.

Newmont hopes to push its all-in sustaining copper costs down to $2 per pound by 2016, but its gold all-in sustaining costs are expected to remain around $1,000 per ounce. With gold hovering around $1,250 per ounce to $1,350 per ounce over the past six months Newmont's margins could easily be compressed. Even in the best case scenario, Newmont comes up short when compared to Freeport-McMoRan.

Teck Resources (NYSE:TECK) is another copper miner with growing oil and gas assets. The key is that Teck's recent oil sands investment comes at a high cost. It recently bought into the Fort Hills oil sands project in Alberta, Canada. New oil sands projects are expensive. Teck's Fort Hills project will need an oil price of around $100 to be economical.

The big picture
China continues to develop. This means that in the long run, it will continue to consume copper. Established low-margin producers like Southern Copper and Freeport-McMoRan offer good exposure to the copper market. Freeport-McMoRan's big upside is its highly profitable oil and gas segment. Teck may look like Freeport one day, but for now it remains to be seen how its Fort Hill project will unfold.