Matthew McConaughey and Woody Harrelson, the co-stars of the HBO hit True Detective, didn't just break the case they'd been chasing for eight episodes when the season finale aired last week. They also broke the Internet.

"Form and Void" drew an impressive 1.6 rating in the key 18-49 demographic, reeling in more than 3.5 million live viewers -- 33% more than its prior season high. (Episode 6, "Haunted Houses," drew 2.64 million viewers.) Many more tuned in online, only to be frustrated when overwhelming demand for the live-streamed finale hobbled HBO Go: 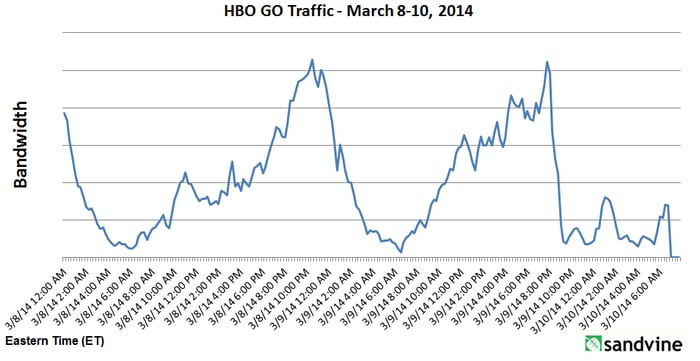 What can we take from this as investors? When it comes to TV, the Internet isn't ready for prime time. The infrastructure for delivering flawless signal isn't available, which at least partly explains why Netflix struck a deal with Comcast (NASDAQ:CMCSA) to get direct, Tier 1 access to its network.

My guess is we'll see more such deals soon enough. In the meantime, as investors, I think there are two areas we need to be watching:

1. The backbone. With more traffic than ever flowing through the Internet's byways, it's important to note that the interconnection points -- where the corporate-controlled federations that comprise the Internet come together -- are still in need of upgrading. Think of them as old pipes incapable of handling the high-pressure water streams flowing through a new house with modern appliances. Adding new, hyper-fast connections should allow for faster delivery of high-density multimedia such as television broadcasts. Infinera (NASDAQ:INFN) is better positioned than most to profit from the upgrade cycle.

2. The last mile. A faster backbone won't matter much if the gateway to your computer or set-top box is cripplingly slow. Upgrades to last-mile connections managed by cable providers is essential to seamless Internet TV delivery, which is why I think we'll see more deals like that struck between Netflix and Comcast, or creative options like a high-capacity Chromecast that just stores more of the content you like right there in your living room.

We've known about weaknesses in the Internet TV delivery mechanism for a while. The trouble with the True Detective finale merely clarified them and, in the process, accelerated what I suspect is a massive investing opportunity. I'm looking forward to cashing in.