No one has a bigger presence in asthma than GlaxoSmithKline (NYSE:GSK). The company's Advair, a treatment for chronic asthma, generated over $4 billion in sales in the U.S. and more than $8 billion world wide last year.

Advair is the best selling drug in Glaxo's lineup of eight approved respiratory treatments for asthma and chronic obstructive pulmonary disease, or COPD, indications. That lineup, which also includes blockbusters Flovent, with global sales of $1.2 billion, and Ventolin, with worldwide sales of $1 billion last year, produced nearly $12 billion in sales during 2013.

However, Glaxo isn't sitting back resting on that success. It hopes to file for FDA approval of mepolizumab, a treatment for particularly tough-to-treat asthma cases, later this year. If the FDA gives the go-ahead, mepolizumab will strengthen Glaxo's position as the market leader in respiratory disease; helping it maintain its lead on competitors AstraZeneca (NASDAQ:AZN) and Merck (NYSE:MRK). 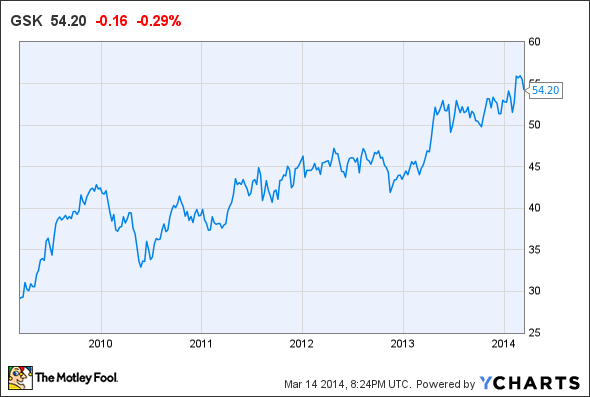 Treating the tough to treat
If approved, Glaxo's mepolizumab will provide a new treatment option for the roughly 4% of asthma sufferers that have eosinophilic asthma that's poorly controlled by traditional corticosteroids like prednisone.

Mepolizumab was originally earmarked as a treatment for hypereosinophilic syndrome, or HES, a rare blood disorder in which a type of white blood cell known as eosinophilics is overproduced. If left untreated, that overproduction can eventually result in organ damage or failure.

Despite posting some promising trial results, Glaxo pulled its EU application for approval for HES patients following regulators' demand for additional data. That shifted Glaxo's focus to eosinophilic asthma, a variation of asthma that is similarly characterized by the presence of too many eosinophilic white blood cells. That eosinophilic over-activity causes lung inflammation that's not easily controlled by existing asthma therapies.

In a phase 2 trial that was completed in 2011, mepolizumab cut the number of severe asthmatic attacks in eosinophilic asthma patients by up to half. That significantly better than placebo result led to similarly successful phase 3 studies, clearing the path to an FDA filing later this year.

If approved, patients may find they have to turn less often to relief from corticosteroids, drugs used to treat acute asthma attacks that can sometimes cause side-effects including osteoporosis and high blood pressure.

The potential approval for this hard-to-treat patient population could give Glaxo an advantage over competitors including AstraZeneca. Astra sold more than $4.3 billion of its respiratory drugs Symbicort and Pulmicort last year, and the company moved its own eosinophilic asthma drug, benralizumab, into phase 3 trials last fall.

An approval could also help Glaxo strengthen its market position against Merck. Merck's Singulair generated more than $5 billion a year in revenue before losing patent protection in 2012, and despite losing exclusivity, Merck still sold more than $1 billion off Singulair in 2013.

In addition to Singulair, Merck also markets Dulera, an acute asthma drug approved in 2010. Dulera's sales grew from $207 million in 2012 to $324 million last year. Further down Merck's pipeline, the company expects to report results from phase 2 study of MK-1029 in difficult to control persistent asthma patients by mid year.

A wave of approvals sets the bar high
Glaxo hopes its ongoing commitment to research and development can help keep a steady stream of compounds in front of regulators. The company spent nearly $6.5 billion on R&D in 2013, roughly in line with a year ago, making it among the top 10 R&D spenders in the industry.

So far, the company's spending appears to be paying off. The FDA approved five new Glaxo drugs last year, including two respiratory drugs developed by Glaxo with its partner Theravance (NASDAQ: THRX). Those two drugs, Breo Ellipta and Anoro Ellipta, were approved as treatments for chronic obstructive pulmonary disease, or COPD. Breo Ellipta, with projected peak annual sales of $1.3 billion got the go-ahead last May, and Anoro Ellipta, with peak sales potential of $1.4 billion won approval in December.

Fool-worthy final thoughts
Glaxo has 19 ongoing clinical trials for respiratory drugs targeting conditions like asthma and COPD, which should give Glaxo plenty of additional potential respiratory therapies down the road.

That pipeline is important given Advair has already lost patent protection, and Glaxo's patent on the Advair Diskus dispenser expires in 2016.

As a result, investors should be paying attention to when Glaxo files for approval of mepolizumab, how quickly Breo Ellipta and Anoro Ellipta win market share, and whether respiratory drugs in phase 2 advance into phase 3. All three of those considerations could have a big impact on how much of Advair's sales can eventually be offset when the Diskus patent rolls-off.