GE will make or break the 10 companies on this list.

For an investor, one of the most important aspects of evaluating a company is researching its relationships with stakeholders. In many respects, we have mountains of information at our fingertips thanks to everything from product reviews on Amazon.com, employee feedback on Glassdoor.com, or lists such as Fortune's "World's Most Admired Companies".

In my research, however, I've noticed a gaping hole when it comes to evaluating one crucial group of stakeholders: the suppliers. Thus far, I have yet to stumble upon a website or research tool that allows for a holistic view of a company's relationships with its suppliers.

GE works with all types of companies, including engineers from BP, as shown above. Source: General Electric.

Combing through 10-Ks and industry trade magazines can only get you so far. These filings and publications don't really tell you much about whether a supplier-customer relationship is thriving or straining and what that could mean for eithercompany down the road.

With that in mind, I decided to take a closer look at some of the suppliers with significant ties to one of my largest holdings, General Electric.

Why? Because supplier issues can wreak havoc on a stock. See Yum! Brands' recent Chinese food scare for a prime example.

In addition, John Mackey, co-CEO of Whole Foods and a champion of the concept of conscious capitalism, describes suppliers as the "most neglected of the major stakeholders at most companies." For me, that comment alone triggered an interest in the topic. If suppliers are typically hung out to dry by most companies, then finding a company that is fostering those relationships could speak volumes about its approach to running a business. There's even the possibility that one of my Foolish readers has some insight into the companies that provide GE with everything from jet engines to spare refrigerator parts.

For starters, I checked Bloomberg for data on the companies most reliant on GE for sales. They might not be GE's absolute biggest suppliers, but they're the ones most dependent on the industrial giant to prosper or even to simply stay afloat. The chart below reveals a list of the companies with huge stakes in GE's success at this point in time:

The company most reliant on GE, Vasomedical, derives a whopping 79% of its annual revenue from the industrial giant. Vasomedical operates in close proximity to GE in upstate New York and notes in its financial statements that "a significant amount" of its annual sales arises from a single contract with GE's health care operation.

Digging into the rest of the companies revealed some anomalies -- such as the wind company Jiangsu JIXIN that is solely focused on the Chinese market -- but for the most part the suppliersthat attested to greater than 10% of sales stemming from General Electric were largely in the same industries. Some might look at this as a risk, or at least a cause for concern, but certain suppliers, such as Precision Castparts, point to the positive aspects of the relationship. In its case, a 45-year relationship with GE and a 35-year relationship with Pratt & Whitney speak to Precision's high level of customer service and long-standing, strong reputation in the aircraft market.

Overall, the analysis on suppliers only allows you to get skin-deep without greater access to information. For the foreseeable future, investors will not be privy to the inner workings of sales contracts, delivery and payment terms, or multi-year agreements between companies. In some cases, these details will surface, but comparing and contrasting how a company treats one supplier versus another would prove an arduous task.

For now, it's a worthwhile exercise for investors interested in GE's relationships to get a sense of how its suppliers are performing financially and operationally. To that end, here's a look at the five-year returns seen by the publicly traded companies referenced previously: 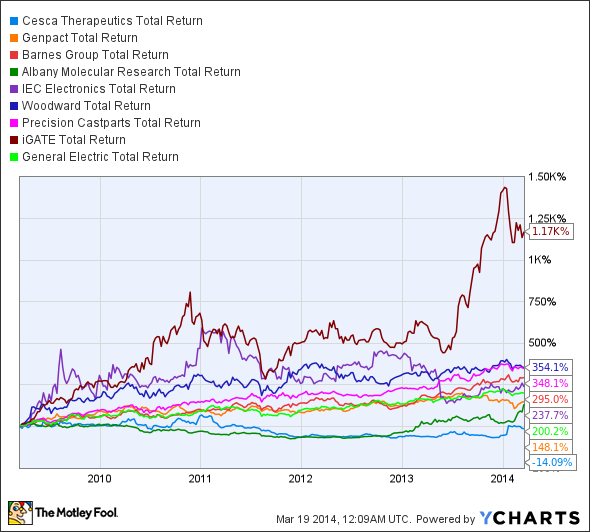 Foolish takeaway
GE's suppliers are just one component of a five-part corporate relationship network that also includes investors, customers, employees, and community. From my perspective, however, the suppliers might be among the most difficult to gauge in terms of how they are perceived by others in the industry.

Based on the price chart above, at least, we can tell that almost all of the companies most reliant on GE have performed quite well over the last half decade, which shows momentum in the broader industries in which they operate. It might not tell the whole story of GE's supplier relationships, but it could give shareholders a few stock ideas to add to their watchlist.