During a time when the overall beer industry is struggling, craft brewers like the Boston Beer Company (NYSE:SAM) and Craft Brew Alliance (NASDAQ:BREW) have experienced positive sales growth. Like any company, though, craft breweries come with their potential risks. Knowing these risks is an essential part of investing.

Governmental wrenches
Breweries operate under federal, state, and local laws and require multiple licenses and permits. A large brewer like Boston Beer can control when it applies for permits, but if the government were to do something crazy like shut down then these applications would go unseen.

That's what happened in October last year when the Alcohol and Tobacco Tax and Trade Bureau (TTB) was closed due to the government shutdown. Boston Beer, CBA, and other breweries could not get new seasonal beers and labels approved while the TTB was shut down.

This affects craft brewers more than large ones like Anheuser-Busch (NYSE:BUD) because seasonal beers play a larger part in the craft brewing business. Busch had four seasonal ales that were already approved at the time of the government shutdown. The company couldn't release any new brands, but it could focus on the international expansion of staples like Budweiser.

Fortunately, the TTB resumed functionality before it did too much damage and the craft brewing industry has continued its successful growth. Another government shutdown could bring more problems in the future, though.

Serious seasonality
The craft beer market experiences seasonal fluctuations, with sales typically dropping in the first and fourth quarters of the fiscal year. 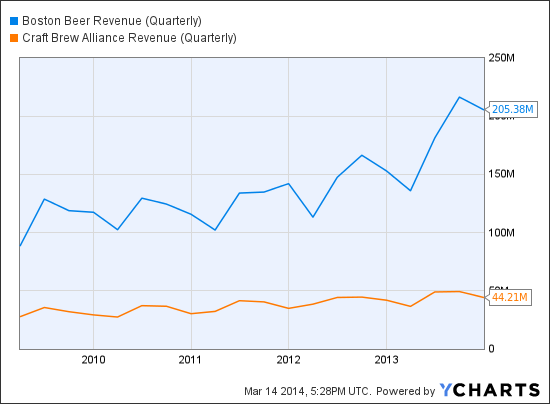 The chart shows revenue dropping during cold parts of the year with spikes in the warmer periods. People prefer a cold beer on a hot day, which means Boston Beer and CBA's sales also depend on the weather. If there is an unseasonably cold summer then sales could potentially drop. Busch also experiences some seasonality, but because of its international reach regional weather is not as big of a factor.

The price of luxury
Craft beer is high quality, but it is also more expensive than other beers like Bud Light. Because it's perceived as a luxury good, downturns in the economy can effect consumer confidence and hurt craft beer sales. With less disposable income people could replace expensive, high-end beer with cheap, lower-quality ones or could cut out beer consumption altogether. This would obviously have a negative impact on all aspects of craft brewer's financial results while helping competititors that produce cheaper beer. Conversely, when the economy is strong, craft beer sales could increase.

Don't get caught by surprise
The risks mentioned above have been identified by CBI and Boston Beer, which means the companies are prepared to deal with these problems. Craft brewers cannot control the government, weather, or economy, but by addressing potential threats to their businesses they won't be caught off guard.