Many media outlets are publishing stories about how Costco (NASDAQ:COST) is likely to face long-term pressures because Millennials prefer to live in urban areas, where you won't find any Costco warehouses. But the media might be overlooking one very important point.

Everyone ages
Based on historical trends, folks tend to get married and have children after their young-adult life experiences. Therefore, while Millennials prefer to live in urban areas now, and suburbia is seen as "out," these trends might change over time. When people get married, they tend to buy homes. That being the case, many of these people will look for homes in suburbia.

That said, Costco isn't dismissing the urban trend. It's going to take a look at current trends and slowly figure out ways to maximize its potential. This could sound like a negative since Costco has a habit of sitting back and relying on its simple yet effective business model, but management is strong and has proven that it can overcome headwinds. As long as the right leadership is in place, challenges like these can be met. That's why the winners keep winning in the business world.

An undeniable current trend
While Costco could figure out a long-term solution, or it's very possible that Millennials change their living preferences, the current circumstances are undeniable. Many 18-32 year olds prefer to live in urban environments.

Target wants to stay in-line with the urban trend. Its CityTarget stores are located in major cities. Its TargetExpress unit is right outside the University of Minnesota and is a test store. Therefore, Target will have an opportunity to see if its CityTarget and TargetExpress stores have long-term potential based on their strategic geographical positioning.

Wal-Mart (NYSE:WMT) followed a similar game plan, having successfully tested and opened a Wal-Mart Neighborhood Market and Wal-Mart Express stores. Unlike traditional Wal-Mart stores, these locations are small enough to be placed in urban areas, giving the company an opportunity to attract younger consumers while also stealing market share from the dollar stores. At the moment, Target and Wal-Mart are ahead of Costco in this area.

It's clear that Costco doesn't resonate well with young consumers via social media. On the other hand, it might not matter? Based on Costco's consistent top-line growth over the past five years, the answer would be no: 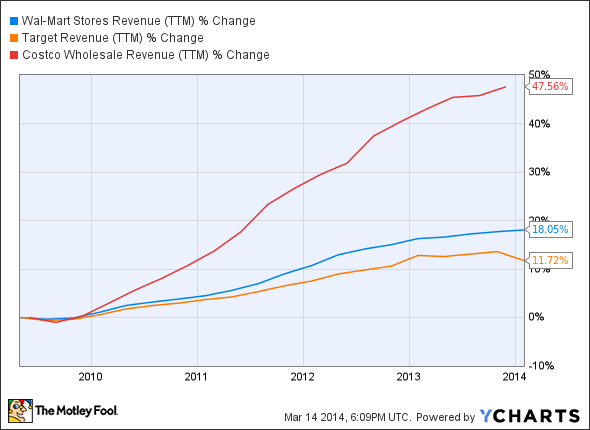 The Foolish bottom line
Costco might be lagging its peers when it comes to targeting younger consumers, but it's still delivering growth. On top of that, many Millennials are likely to alter their living preferences in the future.

Even if this isn't the case, it's likely that Costco will find a way to get into the urban market, one way or another, over the next 10 years. Then again, it might not need to since many of these same consumers will be shopping online. That's where Costco will likely focus its efforts.

Conclusively, the threat of generational living trends to Costco appears to be overblown. Until there are revenue and comp declines, the stock should remain a winner.