Today belonged to the Federal Reserve, as far as U.S. stocks are concerned. As expected, volatility was muted before the 2 p.m. ET release of the Federal Open Market Committee's press release summarizing the outcome of its policy meeting. The impact of the statement and the press conference that followed was swift, with the benchmark S&P 500 ending Wednesday's session down 0.6%, after being down up to 1.2%, with the narrower Dow Jones Industrial Average (DJINDICES:^DJI) losing 0.7% (see following graph) on the day. One (interest rate-sensitive) sector that reacted positively was banks, with Bank of America (NYSE:BAC), Citigroup (NYSE:C), and JPMorgan Chase (NYSE:JPM) gaining 1.4%, 1.6% and 0.4%, respectively: 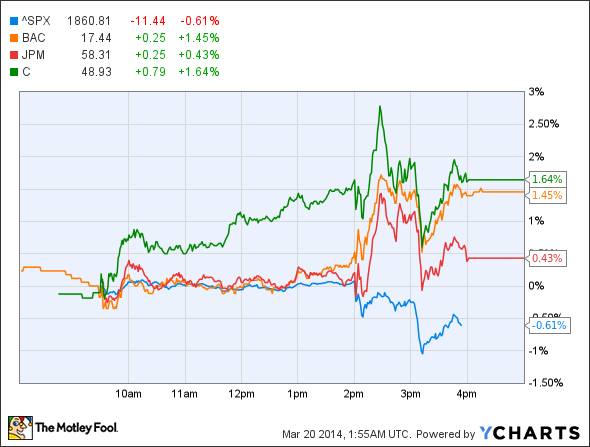 Rates guidance: Forget the unemployment rate
As expected, the Fed will reduce its monthly asset purchases by another $10 billion, beginning next month. More importantly, however, the Fed chose to de-couple its forward guidance on interest rates from the unemployment rate. Previously, it had said that a 6.5% rate was the threshold at which it would begin to consider raising interest rates. With the unemployment rate at 6.7% in February (and even touching 6.6% in January), that benchmark began to look obsolete, as it is clear that we are still some ways away from a first interest rate increase. Instead, the Fed statement pointed to a broader range of indicators:

In determining how long to maintain the current 0 to 1/4 percent target range for the federal funds rate, the Committee will assess progress--both realized and expected--toward its objectives of maximum employment and 2 percent inflation. This assessment will take into account a wide range of information, including measures of labor market conditions, indicators of inflation pressures and inflation expectations, and readings on financial developments.

Rate increases: Just how far away are we?
The Fed's statement indicates that it will probably maintain interest rates at zero "for a considerable time after the asset purchase program ends." When she was asked to qualify how long that period might be, Janet Yellen went off-script, giving an answer that was uncharacteristically specific for a Fed chief by stating "something on the order of six months, or that type of thing," before adding the traditional caveat that the timing will depend on the labor market and inflation.

This was arguably the biggest surprise of the press conference. On the present taper trajectory, six months would put the first interest-rate rise during the second quarter of next year. That's a more aggressive timetable than the market was discounting (although let's not forget the "or that type of thing," which represents a significant margin of error), and it's probably not coincidental that this question/answer roughly coincided with stocks' intraday low.

The bottom line for investors
For market-timers and other short-term speculators, the minutiae of monetary policy are critical. Long-term investors, on the other hand, have the luxury of being able to ignore 99% of these debates. Whether the Fed raises rates in mid-2015 or at the end of next year will have minimal impact on the conduct and results of American business. Banks are something of an exception, because of their dependency on the yield curve; today's outperformance of the sector may have been driven by the prospect of earlier-than-expected rated hikes and, thus, a steeper yield curve -- a key driver of bank profits. I continue to think the three banks I mentioned in the opening paragraph offer decent long-term value – certainly better than the broad market.