Energy intelligence website Drilling Info recently had an interesting article detailing two ancillary plays to the Eagle Ford Shale. These two plays, the Pearsall Shale and the Eaglebine, almost act like bookends to the Eagle Ford. While these plays aren't as well known to investors, the potential is there for long-term gains. Let's take a closer look at the plays and the players.

The northeastern part of the Eagle Ford is what's known as the Eaglebine because it's where the Eagle Ford Shale meets the Woodbine Sandstone. Among the companies working on the part of the play are Halcon Resources (NYSE:HK), EOG Resources (NYSE:EOG) and Encana (NYSE:OVV). However, of the three, Halcon is most focused on the Eaglebine, while Encana has taken its focus off of the play as it's not one of the company's new five core liquids growth plays.

While Halcon Resources recently sold a portion of its acreage in East Texas, these assets were on the eastern edge of the trend. The company deemed these acres as non-core and was able to net $450 million in cash in order to fund its core drilling plan. One of the core pieces of that drilling plan is the 100,000 net acres in what it calls the El Halcon, which is just to the west of the recently divested acres. The following slide shows Halcon Resources' position in the overall Eagle Ford trend. 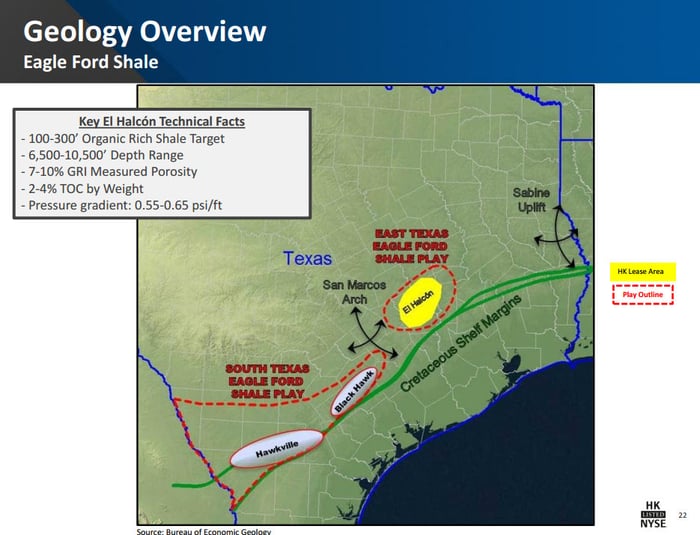 So far the early results that Halcon Resources is seeing have been strong. The company is still working to optimize its completions and well design, but production is growing rapidly and is up 860% over the past year. Halcon appears to posses some of the most promising acres in this part of the play.

EOG Resources is also doing some work in this eastern portion of the play. The company recently entered into the third and final phase of its Eaglebine joint venture. It paid $15 million for a 75% working interest in two additional wells, which will be drilled over the next few months. The success of this venture will further the development of the Eagle Ford Shale as it extends to the east. However, the fact that EOG has made it to phase three of the joint venture is a promising sign.

The Pearsall Shale
Closer to the Mexican border and below the Eagle Ford Shale lies the Pearsall Shale. A number of companies including Cabot Oil & Gas (NYSE:COG) are working to develop the Pearsall Shale. Cabot is working on this deeper shale formation as part of a joint venture it signed in 2012 with Osaka Gas Co. The following slide details a map of the company's Pearsall JV acreage. 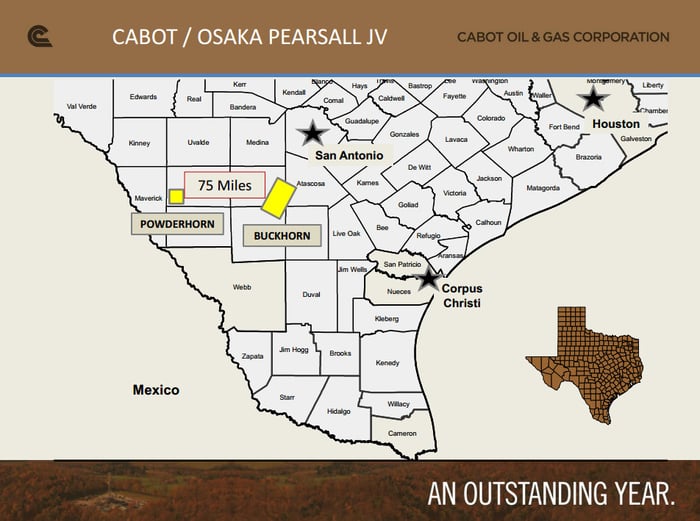 Cabot has drilled a number of promising wells into the formation, which it has called a science project. The company noted last July that the play is still young, but it does have a "thick column of hydrocarbon" according to CEO Dan Dinges. That makes it a play to watch as it has the potential to extend the life of Texas' oil boom, as the industry is able to go deeper into additional zones like the Pearsall Shale.

Investor takeaway
One of the most fascinating stories about the oil boom is how the industry is finding news zones above and below the initial targets. This has the potential to extend the energy boom much farther into the future than many investors realize. The Eagle Ford Shale region appears to posses these additional zones, with the Eaglebine and Pearsall being just two of the promising zones that could extend the energy boom for years to come.

Is OPEC worried yet?