Please ensure Javascript is enabled for purposes of website accessibility
Free Article Join Over 1 Million Premium Members And Get More In-Depth Stock Guidance and Research
By Cory Renauer - Mar 19, 2014 at 9:30AM

The Street was strangely negative towards Pfizer during what was overall, a very positive week.

Last week was unusually eventful for Pfizer ( PFE -0.62% ). The company, along with partner Bristol-Myers Squibb ( BMY 0.82% ) won a supplementary approval for its Factor Xa inhibitor. Pfizer also released some better than expected data from a pneumonia vaccine study that may give it a leg up on competition from Merck ( MRK 1.29% ). News surrounding Pfizer wasn't entirely positive. The loss of a patent battle for its blockbuster drug Celebrex could result in earlier than expected generic competition from Mylan ( MYL ) and Actavis ( AGN ). As you can see, the market focused on the bad news. Overall, I thought Pfizer's positive news outweighed the negative, and certainly the stock did not earn a 3.7% haircut. 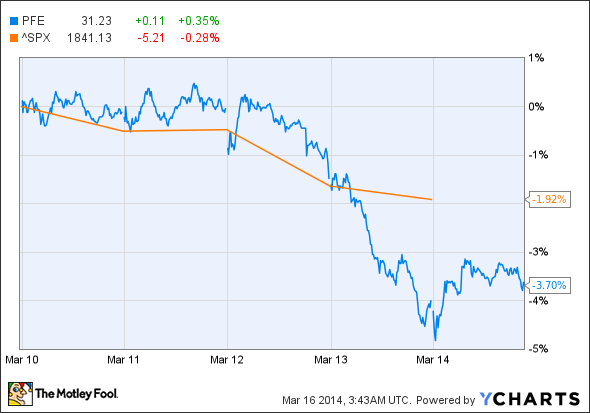 Label expansion
The FDA has approved an expanded indication for Eliquis. The anticoagulant is now approved for the prevention of clots in patients that have recently received hip or knee replacements. Bristol-Myers estimates just over one million such surgeries are performed each year in the US.

Post replacement surgery patients are at high risk of developing clots that can become dislodged then obstruct blood flow to the lungs. It's a life threatening condition that often requires rehospitalization shortly after patients are discharged. The trouble with using existing anticoagulants to prevent clots from forming, is that they often result in bleeding episodes. This can be equally dangerous.

There's a growing tendency for insurers to reduce reimbursements to hospitals when patients require rehospitalization shortly after they're discharged. Eliquis' advantageous safety profile should give it a leg up on existing competition. Also, the drug is being used in clinical trials with the first antidote for Factor Xa inhibitors. It seems andexanet alfa from Portola Pharmaceuticals can switch off the effects of certain anticoagulants. If approved, it could save lives of patients experiencing bleeding episodes, or requiring emergency surgery. Being one of few Factor Xa inhibitors with andexanet alfa clinical data should give Eliquis an extra boost going forward.

A pleasant surprise
Last year global sales of the Prevnar family of pneumococcal vaccines fell about 3% to $3.97 billion. It was Pfizer's second largest franchise in 2013. Recently released data might put it in the company's top spot before long. The vaccine was initially approved for use in infants and young children. Results from an 85,000 adult patient, postmarket study suggest that the drug is good at preventing the more serious invasive pneumococcal disease in adults over 65 years old.

Currently the only vaccine competing for market share with Prevnar 13 is Merck's Pneumovax. Sales of Merck's vaccine rose an impressive 13% last year to $653 million. The surprisingly strong data from Pfizer's vaccine should slow Pneumovax growth considerably.

The bad news
Last year Celebrex sales in the US reached $1.9 billion, up 11% from 2012. It looks like that's going to be a highwater mark. Pfizer tried to extend US exclusivity for Celebrex with a "methods of use" patent. These sorts of patents are far less bulletproof than those on the compound itself, but they're worth a shot. Last week a District Court invalidated the method patent. This means generic competition will start eating into Pfizer's Celebrex sales beginning May 30, 2014. That's about 18 months earlier than the company had hoped for.

Both Actavis and Mylan issued statements that assured investors they're ready to market generic versions of the anti-inflammatory as soon as the FDA gives the green light. Odds are good that Pfizer will lose more than $1 billion in sales from the ruling, but then again it might not. The ruling is subject to an appeal. If Pfizer wins, and the patent is upheld, the company could collect lost sales and damages from the generic drug makers.

Foolish final take
When Pfizer reported earnings at the end of January -- long before last week's events unfolded -- the company issued earnings guidance of between $2.20 and $2.30 per share. At recent prices of around $30 per share, that's under 14 times next year's earnings, maybe less. The Celebrex loss stings, but the sum of last weeks events might result in a revision upwards when the company reports again.

Despite patent losses, Pfizer continues to raise its dividend and repurchase shares. A further $5 billion in buybacks are slated for this year. Nothing definite is in the making, but the company is also considering options for its generics operations that may include a spin-off. Altogether, Pfizer is beginning to look like an attractive value play.

What This Label Expansion Means for Pfizer