Please ensure Javascript is enabled for purposes of website accessibility
Free Article Join Over 1 Million Premium Members And Get More In-Depth Stock Guidance and Research
By Ted Cooper - Mar 19, 2014 at 11:30AM

Green Mountain surged on news of its partnership with Coca-Cola. Find out how SodaStream can inform investors' analysis of the deal.

News of the partnership between Coca-Cola ( KO 0.89% ) and Keurig Green Mountain ( GMCR.DL ) sent the latter's stock price soaring. Within a week of the announcement, Green Mountain's stock price was 50% higher than it was before the news become public – a stunning $6 billion surge in its market valuation.

The company's stock has retreated somewhat since the announcement, but still remains at a much higher level than its pre-partnership valuation. Although Coca-Cola's commitment is undoubtedly beneficial for Green Mountain, one has to wonder if a not-yet-launched at-home carbonation system is really worth the billions that the market is attributing to it.

Exciting prospects
First, the good news. SodaStream ( SODA ) estimates that the U.S. at-home soda market could potentially be worth $40 billion – that's if it reaches 100 million U.S. households. However, even if the market only realizes a quarter of that potential, it will grow as large as the at-home coffee market is today. That represents an enormous opportunity for Green Mountain as it launches its new at-home carbonation system.

Moreover, SodaStream's U.S. household penetration is at 1% just a few years after its entry into the market. It hopes to eventually achieve 10% household penetration. If the at-home carbonation market reaches its full potential – 100 million out of 115 million U.S. households and $40 billion in revenue – and if Green Mountain captures a 20% share of that market, the opportunity will give it $8 billion in additional revenue.

This sounds like an amazing opportunity for Green Mountain. So what is there to gripe about?

Still in its infancy
Green Mountain's stock now trades for $4.9 billion more than it did before the announcement, after adjusting for the $1.25 billion in cash from Coca-Cola's equity purchase.

Even though the potential annual earnings are a massive $3 billion, the opportunity may not be worth $4.9 billion. It will take many years to reach the $3 billion in earnings – if it ever comes at all. To figure out what it might be worth, I put together a few assumptions. The first assumption is that Keurig Cold matches SodaStream's current household penetration rate in its first year on the market – and continues to penetrate an additional 1% of households each year through 2024. 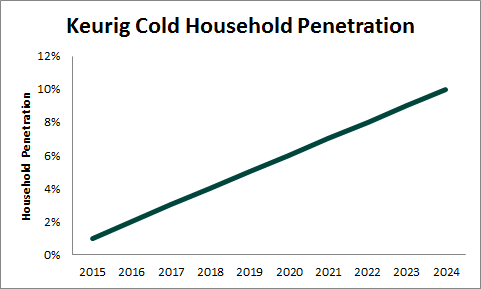 Author projects 1% household penetration in 2015, increasing by 1 percentage point each year through 2024

At 1% household penetration, Keurig Cold would be in about 115,000 U.S. households. At $75 in revenue per household, it would generate $86 million in revenue. After deducting a 25% royalty to beverage suppliers (Coca-Cola and other brands) and assuming a 50% gross margin, the gross profit in year one would be $32 million. That's only $0.19 per share. If all of the assumptions hold – add one percentage point market penetration per year, 10% increase in revenue per household, 25% brand royalties, and 50% gross margin – Keurig Cold will earn $4.43 per share in 2024. 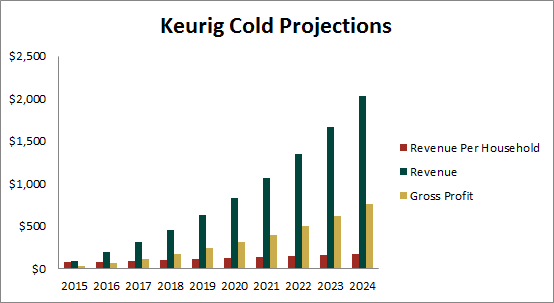 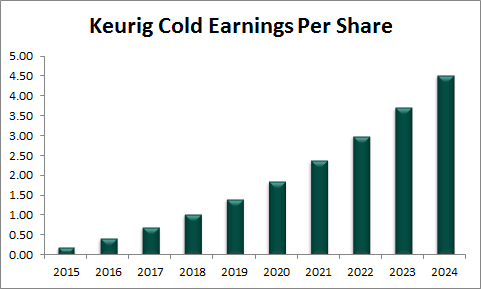 After adjusting for Coca-Cola's $1.25 billion investment, Green Mountain's stock price was $80.27 before the deal was announced. The company's stock now trades near $108 per share – roughly $28 per share higher as a result of the Coca-Cola partnership. If all goes according to plan, Keurig Cold will generate $1.86 earnings per share in 2020 and $4.53 earnings per share in 2024. That means the market is pricing the opportunity at 15 times potential 2020 earnings and 6 times potential earnings 10 years from today.

You can quibble with my projections – although bullish, there is room for even more optimism – and you can argue that the stock was undervalued before the announcement. Still, the point remains the same: the market is forcing investors to pay for future growth that will take many years to materialize, if it ever materializes at all.

Some investors make a living off of that kind of investing, but few can do it profitably over the long run. For now, it appears that Green Mountain's stock price has gotten ahead of the business. Investors beware.