Please ensure Javascript is enabled for purposes of website accessibility
Free Article Join Over 1 Million Premium Members And Get More In-Depth Stock Guidance and Research
By Matthew Frankel, CFP® - Mar 19, 2014 at 7:00AM

For investors looking for growth, it makes sense to try to buy the largest banks for the lowest amount of money.

When buying bank stocks for your portfolio, there are a couple of paths you can choose. Do you buy the strongest and most stable banks with excellent asset quality, such as U.S. Bancorp ( USB -3.59% ) or Wells Fargo ( WFC -2.81% )? Or should you buy a "cheaper" bank that is still trying to recover from the recession like Citigroup ( C -2.06% ) or Bank of America ( BAC -2.46% ) and hope that you'll see big profits as their assets improve?

There is a tremendous range in the asset and deposit sizes of the 10 largest publicly traded U.S. banks, with the largest about 11 times the size of the 10th largest. There is also just as much variety among how highly the market values these companies, with price-to-tangible book value ratios ranging from 0.87 to 3.22. Here is a breakdown of the top 10, and the respective valuations of each:

Strong and stable
Wells Fargo has historically had one of the highest-quality asset portfolios in the sector, and this allowed the bank to not only survive, but thrive during the crisis years. Wells was the only U.S. bank of any size in 2007 to hold an AAA rating from S&P, and its strength allowed for some savvy moves, such as the acquisition of Wachovia for a fraction of its former value.

Because of both acquisitions and ambitious growth of their existing business, Wells' assets have grown by 250% over the past decade alone, and the company is now the largest retail mortgage lender in the U.S. The company also has a thriving investment banking division that was virtually non-existent before the Wachovia acquisition, and has since increased its market share from 4.1% to 5.7%.

U.S. Bancorp, the most "expensive" of the top 10, has historically had excellent asset quality and very strict underwriting standards. The company is growing its business faster than most of its peers, posting year-over-year loan growth of 5.3%, and earnings growth has followed, with earnings per share up by more than 73% since 2010. Adding to the "safety" of U.S. Bank is that unlike many of its peers, its earnings are not dependent on the release of reserves set aside to cover litigation and losses.

One of the biggest reasons to invest in strong and stable banks like these is for the income. Because of the continuing recovery of some of the big banks, they are forced to pay out minuscule dividends. In contrast, U.S. Bancorp pays out about 2.2% annually, and Wells pays 2.5%, and both have a fantastic history of increasing the yield.

Big and cheap
Several years after the financial crisis, the big banks that made it through the tough times have massively improved their asset quality. Citigroup has done an excellent job of winding down its bad assets and adding healthy loans to its balance sheet, with Citi Holding's assets down by 25% in the past year, and now representing just 6% of the total. Granted, 6% of almost $2 trillion in assets is still a huge amount (about $112 billion), so the market is right to perceive a higher risk level with Citigroup. The company has also tremendously reduced its credit losses and continues to do so, having just announced its fourth-quarter figures were a 15% improvement from last year's.

Bank of America didn't perform quite as poorly as Citigroup during the financial crisis, but it inherited a lot of subpar assets and legal drama through its acquisitions of both Countrywide and Merrill Lynch. Fortunately, the company's legal woes are mostly behind it now, having agreed to an $8.5 billion settlement earlier this year.

Both companies have done a great job of improving asset quality and reducing liabilities, and they should continue to do so. Both still have a ways to go, but I think there will be a double benefit for investors as the bad assets continue to be worked off the balance sheet, because it will raise the bank's tangible book value and improve the market's perception, which will increase the price-to-TBV ratio that the stocks trade for. This double benefit can already be seen in the performance over the past few years, especially in B of A's case. 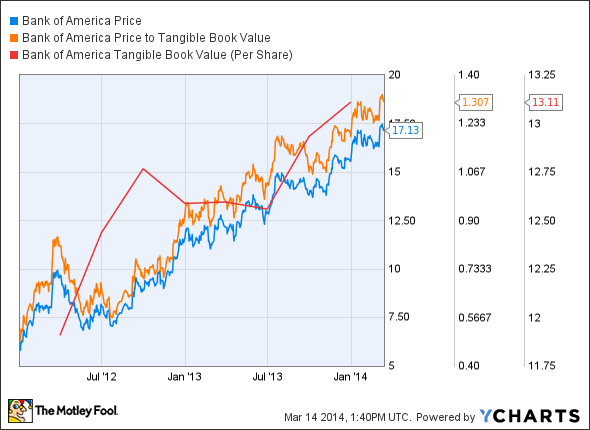 Which is your "type"?
If income or stability is your main priority, the highly valued banks should help you achieve your goals while providing you with significant potential for growth as well. For those who might have a little more risk tolerance, one of the "cheap" big banks offers the most potential for gains, but also comes with a lot of risk, as these companies have not fully recovered from the crisis yet. For those who want a combination of the two, look toward the middle of the chart for banks that would suit your needs.

Whatever you do, don't wait too long! The sector as a whole is very attractive right now, and there are a lot of reasons to believe that the recovery will continue and profits will increase.