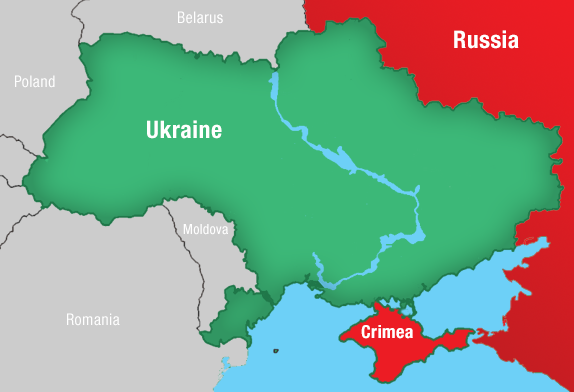 In 1947, a talented Foreign Service Officer named George Kennan wrote "The Sources of Soviet Conduct" for the journal Foreign Affairs. The ideas expressed in that highly influential essay became the foundation of future Cold War strategy for the United States. I believe much of Kennan's thinking remains relevant today.

Vladimir Putin's Russia is not quite the same as the Soviet Union, of course. The Soviet leadership in 1947 believed in a deterministic Marxist-Leninist ideology that held that communism would inevitably triumph over capitalism. Stalin felt he could afford to be patient.

Like Stalin, however, Putin appears to be embarking on a policy of strategic expansion along Russia's borderlands. Just the other day during a speech in the Kremlin, Putin spoke of the breakup of the old Soviet Union:

Millions of people went to bed in one country and awoke in different ones, overnight becoming ethnic minorities in former Union republics, while the Russian nation became one of the biggest, if not the biggest ethnic group in the world to be divided by borders.

This statement provides a not so subtle clue that further expansion by Putin's Russia is a very real possibility. Here are three insights gleaned from George Kennan, as the United States develops its response to the annexation of Crimea and the possibility of future Russian attempts to revise its borders.

1. Trying to appear "tough" will not be successful. Kennan, who first formulated the American policy of containment, favored a long-term, patient response to Soviet expansion, and was highly critical of "threats or blustering or superfluous gestures of outward 'toughness.' " Having devoted his life to studying Russian history and diplomacy, he believed that it was unwise to put a Russian government in a position where it could not "afford to yield."

Indeed, Kennan believed that losing our self-control would be seen as a sign of weakness that Russian leaders would try to exploit. The wise approach, according to Kennan, would be to firmly challenge Russian policy in a way that would leave the way open for "a compliance not too detrimental to Russian prestige."

2. A long-term strategy is essential. In response to Soviet expansion, Kennan envisioned a 10- to 15-year strategy that would allow the United States to leverage its considerable economic advantages. From an economic perspective, the Soviet Union was "by far the weaker party" and a long-term policy might expose deficiencies in its economy and society.

Similarly, the Russian economy today may struggle in the face of long-term sanctions and the withdrawal of Western investment. America and the West do not appear to have much leverage in the near term for preventing, say, Russian moves into eastern Ukraine. Over a longer period, however, the calculus might be different.

3. Putin's power might not be as secure as it seems. In the Kremlin speech, Putin made a compelling case for the popularity of his expansionary policy. He noted that 95% of Russians supported protecting ethnic Russians in Crimea. And 92% supported Crimea's reunification with Russia.

Kennan wisely advises that we should be somewhat skeptical of the support for authoritarian regimes, believing -- in the case of the Soviet Union -- that it contained "within it the seeds of its own decay." Today, it may appear that Putin's recent moves are quite popular, though it's hard to know what all of the people really think. Recent history suggests that undemocratic leaders are often not as popular as they appear.

What does this mean for investors?
Kennan's ideas appear to offer a compelling way for the United States to counter Putin's increasingly aggressive foreign policy. We may not be headed for another Cold War, but it is highly likely that relations between the U.S. and Russia will be strained for some time.

Recently, White House spokesman Jay Carney underlined that point by saying, "I wouldn't, if I were you, invest in Russian equities right now unless you were going short." And earlier this week, Reuters revealed that the SEC reached out to investment companies with investments in Russia to make sure they were "properly managing their risks and disclosing their holdings to investors." Finally, Bloomberg has reported that General Electric (GE -2.88%) and Boeing (BA -0.71%) are growing increasingly concerned about events in Russia. Both companies have considerable investments there, and are worried that Russian retribution in response to U.S. sanctions could hurt their businesses.

It would be wise for investors to understand their exposure to Russia -- whether it's via mutual funds or in the equities of large multinationals. The near-term risks appear quite high, and are unlikely to ease anytime soon, in my opinion.

Should President Obama reconsider?
President Obama recently told an interviewer "I don't really even need George Kennan right now." I think that belief is unwise. No one understood Russia better than Kennan. Even though he is no longer alive, we still have his thoughtful writings on Russia and his diplomatic efforts to guide us.

In conclusion to his essay in Foreign Affairs -- in grand language that evokes another era in our history -- he provided an inspirational call to action. Kennan wrote that we shouldn't complain about the challenge posed by the Kremlin. Instead, he believed the thoughtful observer should:

...experience a certain gratitude to a Providence which by providing the American people with this implacable challenge, has made their entire security as a nation dependent on their pulling themselves together and accepting the responsibilities of moral and political leadership that history plainly intended them to bear.

Obviously, those words were written in a different time under different circumstances. But I think we can benefit from the spirit of those remarks. George Kennan still has much to teach us.

John Reeves has no position in any stocks mentioned. The Motley Fool owns shares of General Electric Company. We Fools may not all hold the same opinions, but we all believe that considering a diverse range of insights makes us better investors. The Motley Fool has a disclosure policy.

Will a New Nasdaq Bull Market Begin in 2023? Here's What History Shows.

The Expected 2023 Recession May Not Materialize. That Could Be a Problem for Tech Stocks
405%