Veeva Systems (NYSE:VEEV) is a provider of cloud-based IT solutions tailored specifically for the life sciences. Their "industry cloud", as they call it, allows customers in the health care space to operate more efficiently by putting everything from customer relationship management (with VeevaCRM) to clinical trial design, data analysis, and regulatory filings (with VeevaVault) online. These offerings follow the growing trend of interconnectedness that penetrates modern business, with a specific eye on the unique regulatory and compliance issues that make health care operations difficult and expensive. 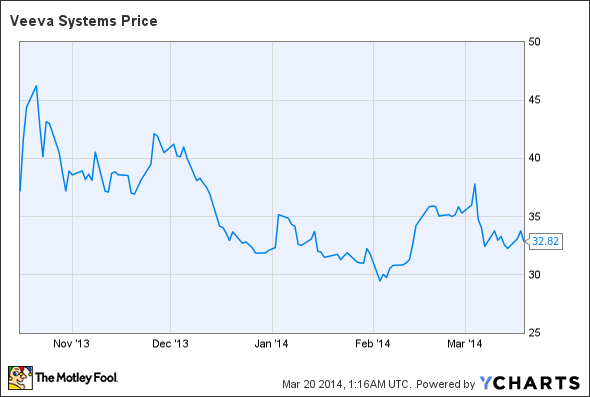 Excitement over Veeva's prospect sent the stock soaring after its October IPO. The stock then pulled back over several months on a series of bearish arguments. Some recent news should relieve those concerns, though, allowing Veeva and it's stock to continue to grow unabated.

Bearish worries
There were two main arguments floating around the web suggesting that Veeva's growth potential was limited, leading to the conclusion that its exorbitant 100 forward P/E ratio is unsustainable. The first argument relates to the total addressable market for Veeva's products. With 33 of the pharmaceutical industry's top 50 companies as customers, one has to wonder if the market is already near saturation. As Fool Leo Sun pointed out, the addressable market for CRM solutions has declined as biotech and pharma layoffs decrease the number of sales reps in the field.

That market could shrink even smaller as larger firms, like Roche's (OTC:RHHBY) Genentech, adopt in-house cloud solutions. In January, Veeva announced that its relationship with Genentech had expired. That disclosure raised concerns that the bigger life sciences players may choose to build their own CRM solutions on salesforce's PaaS platform, bypassing middleman Veeva. For a company as geographically widespread and logistically complicated as Roche (and other big pharma companies), it would make sense to develop its own IT solutions to meet its unique needs.

The other worry, and it is certainly a big one, relates to Veeva's reliance on cloud-computing powerhouse Salesforce.com (NYSE:CRM). VeevaCRM, the product which enables seamless exchange of data and marketing materials between sales reps and management, is based on Salesforce's platform. In exchange for use of the platform and industry exclusivity, Salesforce received a guaranteed minimum cut of VeevaCRM revenue for the duration of the 5 year Value Added Reseller Agreement. It's natural to wonder, then, if Salesforce could use its leverage to squeeze Veeva for a bigger cut when the agreement expires next year.

Renewed confidence
Veeva's most recent quarterly report relieved the weight of some of those concerns. First and foremost, Veeva announced an extension of its arrangement with Salesforce.com through 2025. According to Veeva founder and CEO Peter Gassner, the renewed agreement shouldn't change the status quo, stabilizing gross margins on VeevaCRM revenue for 10 years.

That deal is also a smart one for Salesforce. Salesforce now has guaranteed access to growth in the life sciences IT market with very little operating cost. And for customers like Roche, who are choosing to build private solutions, Salesforce's standard offerings provide a platform for in-house custom CRM design.

The other concern regarding the total addressable market and a fear of competition requires a deeper look at the numbers. The key stat to look for in a growing subscription based company is retained revenue. For fiscal 2014, Veeva retained 166% of its subscription revenue from existing customers at the start of the year. How can you retain more than you had in the first place? Simple -- just sell more to existing customers. Veeva is finding success in growing its addressable market by offering more services, in the form of Veeva Vault and Network, to create an ecosystem of management solutions for its users. And because existing customers are spending more, Veeva is recognizing higher margin revenues with lower acquisition costs, bringing its gross margin up to 75.3% from 74.3% a year ago (with an even bigger improvement in non-GAAP gross margins).

Foolish bottom line
Updates to Veeva's agreement with Salesforce and impressive retained revenue statistics should relieve some worries about the company's operations. While the business is primed for success, investors should still be wary of the price tag, as a 5-year PEG of 4.77 suggests that much of that growth is built in. If you find Veeva interesting, look to benefit from some short-term volatility to build a long term position.