First Solar (NASDAQ:FSLR) met with investors and analysts yesterday, explaining its roadmap for the future and giving revenue and earnings guidance as well. This is a time when the company answers many questions the industry has about where thin-film solar panels fit in the future and how polysilicon fits in the company's growth plans.

Based on the market's reaction, the meeting went extremely well, and First Solar's long-term guidance is certainly very bullish. Here's what the company sees for the future and how it fits into the future of solar.

Utility scale projects like this one have long been First Solar's bread and butter. Source: First Solar.

First Solar sees a bright future
The point of an analyst day is to lay out your plans for the future, and First Solar did a good job of that yesterday. They laid out manufacturing improvements that are expected to bring module efficiency up from 13.4% last year to as high as 19.5% in 2017, and costs are expected to fall to around $0.40 per watt, down from $0.63 per watt last year. What's impressive is that this is with thin-film CdTe technology, not TetraSun's silicon production, which is expected to be competitive next year but still has a lot of unknowns.

If it's able to hit these targets, First Solar should win more utility scale projects and be able to move into commercial and residential markets, increasing revenue and earnings as efficiency improves. The guidance shown below reflects that optimism.

Keep in mind that as First Solar guides further into the future, it has more uncertainty. Management said that only 10% to 20% of 2016 revenue and earnings is under contract as of today. So, there's an assumption that contracts will be won and margins will rise, reversing the current trend.

First Solar has been falling behind
What we've seen over the last two years is that silicon solar manufacturers have caught up on costs and far exceed First Solar on efficiency. You can see this progress below in SunPower's (NASDAQ:SPWR) margins versus First Solar's. 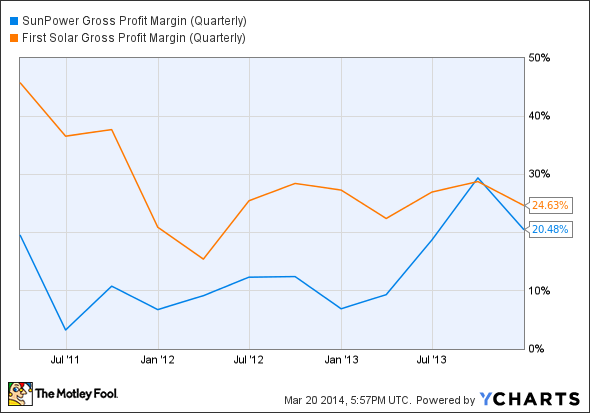 SunPower is a high-efficiency module maker, while First Solar has long led on costs, sacrificing efficiency. But the demands of the industry now value efficiency more.

Will technology investments pay off?
While First Solar's technology improvements and falling costs look impressive, they aren't happening in a vacuum. SunPower is already making modules that are 21.5% efficient and will launch 23% efficient modules next year.

SunPower is winning commercial projects like this one with high efficiency modules, something First Solar hopes to move into. Source: SunPower.

Then there are manufacturers in China who make modules that are 15% to 17% efficient at costs of around $0.50 to $0.60 per watt today. That's before next-generation equipment is installed, which is expected to start in earnest later this year or early next year. New equipment comes with cell efficiencies in excess of 20%, and modules will likely exceed that level by 2017.

So, while First Solar is making improvements, so is everyone else. The challenge is that First Solar is playing catch-up, and 2017 goals may still be behind the competition, even if they're reached. At the very least, I think silicon competitors will be able to match, if not beat, First Solar on cost in three years.

Where First Solar is head and shoulders above the rest
The biggest advantage First Solar has is its balance sheet and expertise in building utility scale solar systems. Modules are no longer the company's strength, because as the cost of modules has fallen, it's become more economical to install more efficient panels than just cheap ones.

As has been the case for the last two years, First Solar isn't a bad company or a bad stock, it's just not the best positioned company in the industry. SunPower is playing from ahead on efficiency and is cutting costs at 20% per year at its manufacturing facilities. I'd rather bet on efficiency that's in the bag and the opportunity for cost cuts than hope CdTe technology can make a huge leap forward. We've seen technology promises fail to live up to their potential in the past, and it's likely other technologies will be more efficient than CdTe by the time First Solar gets to 19.5%.

But the balance sheet isn't worth ignoring, and First Solar will be a player in utility scale solar for years to come. Just look at modules as a potential for upside, not a sure thing.